Today I have a special treat for you all - an update on the bees that my brother-in-law (affectionately known as 'Zack, the Bee Man') keeps on our property and how he harvested wild bees from an old barn!

You may remember when I first told you about the bees arriving and when Zack gave us a BeeKeeper's Perspective and a ton of great information about raising bees last year.

Well, there's bad news-good news on the bee front and Zack's back again to give us an update: 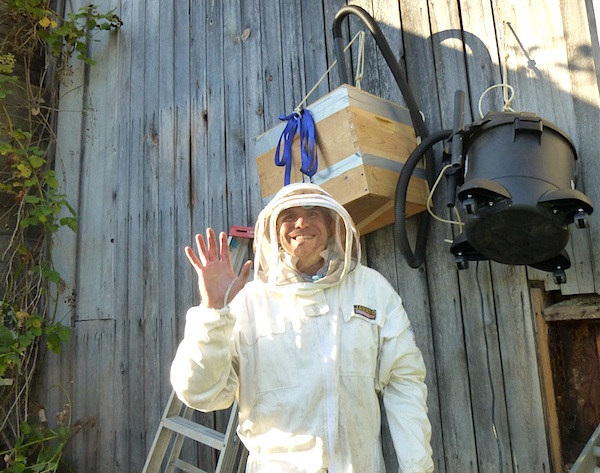 Last year I started keeping honeybees as a hobby and I ended up falling in love. I quickly became emotionally attached to my "girls" and would often find myself gazing at them in wonderment as they buzzed from flower to flower collecting nectar and pollen, all the while pollinating the garden.

I refer to them as "my girls" even though a couple hundred male drones live in the hive, but rarely leave. Male honeybees have no stinger and do not help out with the daily chores around the hive (cleaning, tending to the brood, collecting food for the winter, etc). Subsequently all the girls kick the boys out in late fall so they don't eat all the food stores over the winter!!

As I wrote last year, I'm a novice beekeeper and am still learning how to manage my girls appropriately. Last fall I tried to get away with not medicating my two hives for mites, but unfortunately both of our hives did not make it through the winter. I was heartbroken!

This spring I decided I still wanted to keep honeybees but now I had the task of somehow getting more girls to populate my empty boxes. There are really only three options to get more bees:

Because I promised my wife this was just a hobby and I wasn't going to spend a lot of money on this new hobby, option 1 was off the table. I then tried option 2 and for two months I tried to "bait" the empty hives with lemongrass essential oil, but that didn't pan out. The summer was starting to drag on and I was becoming worried that I wouldn't find any girls in time to make a strong hive that would survive the winter! 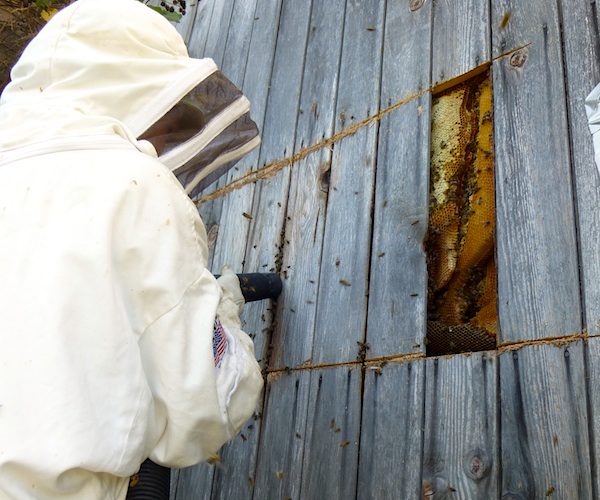 Then one day about two months ago I was contacted by a property owner in a nearby town who owns an old gymnasium that is scheduled to be demolished and had honeybees living in the walls. He wanted to save the honeybees so he contacted me to extract the bees. For me it was a perfect scenario - I got free bees and I didn't have to worry about the large holes I would be leaving in the walls. 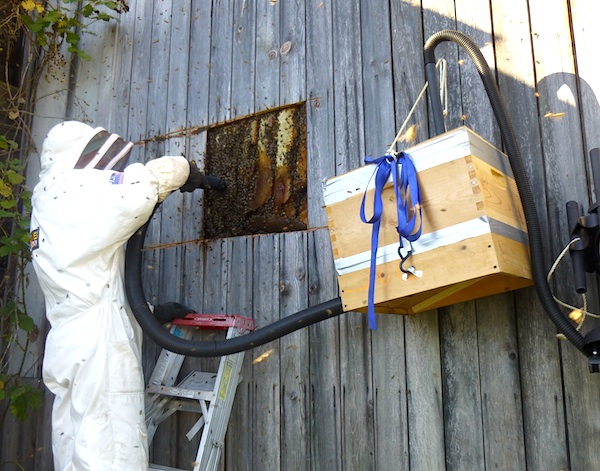 So, it was option three and I quickly purchased a second bee suit for friends who would accompany me with the extraction process and then I built a bee vac that I would use to suck up the bees from the walls (here's the video I used to build my bee vac). 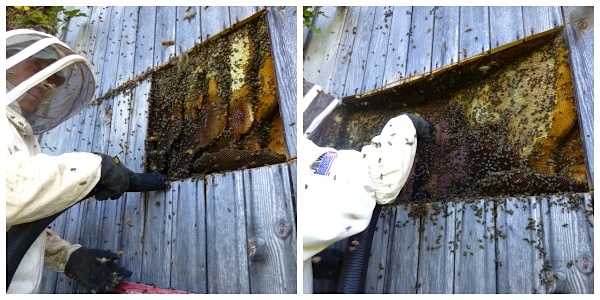 I was able to extract six hives from the old gym. Some of the hives were very large and had lots of extra honey in them and others were quite small or had been recently evacuated. All the extra wax from the hives was melted down in a large pot and will be used to make beautiful beeswax candles later this year. A great Christmas present to go along with a jar of your own honey. Shhh, don't tell my sister-in-law! 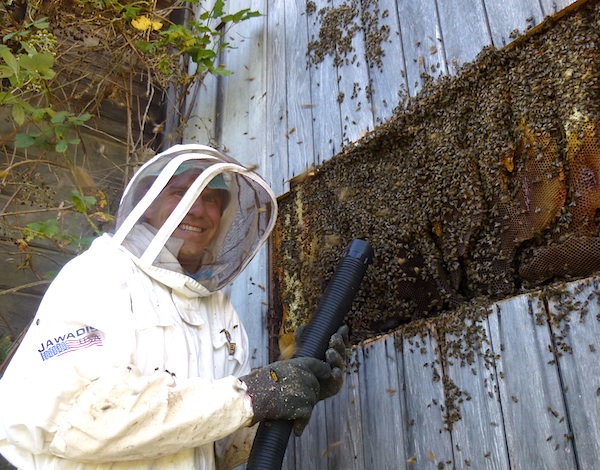 The process of extracting bees from a wall is very exciting. The initial cut with the skill saw on the wall puts all the guard bees on high alert. They pelt your bee suit like a shotgun gone off in your face. 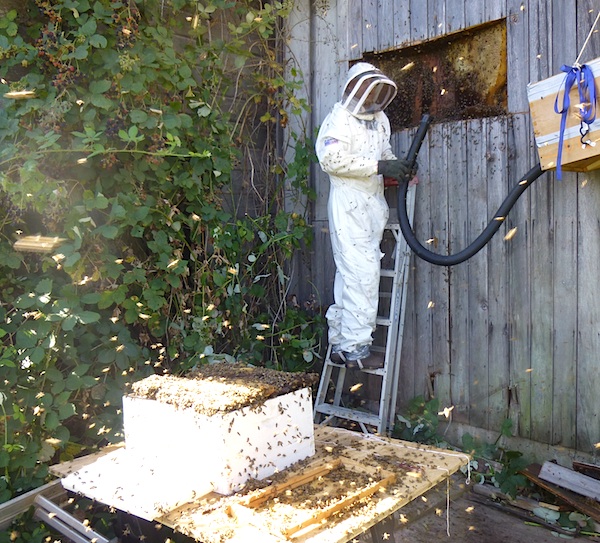 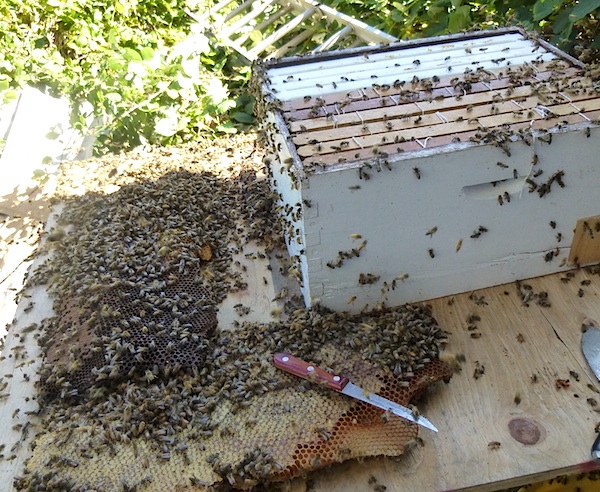 When all the honeycomb had been extracted and a majority of the bees sucked up, I placed the new box with their comb on top of the box where all the bees were and then removed the mesh in between the two boxes so the bees could repopulate their own comb.

There was definitely a steep learning curve to the whole process. After four trips to the old gym (over a two month period) I ended up extracting six hives. The first two extractions didn't make it. I combined two of the weaker hives together and now we have three strong hives that hopefully will make it through the winter. 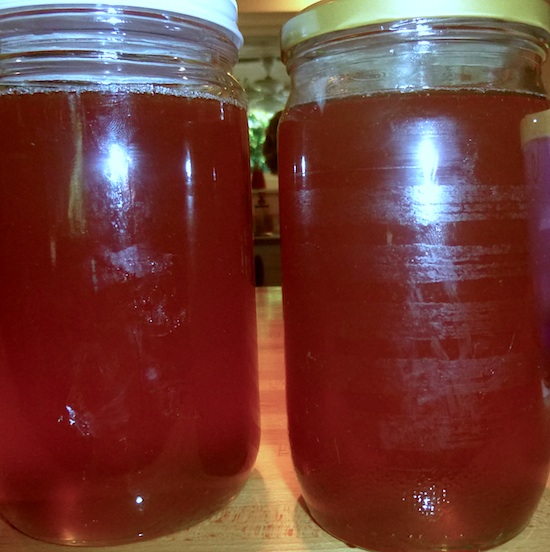 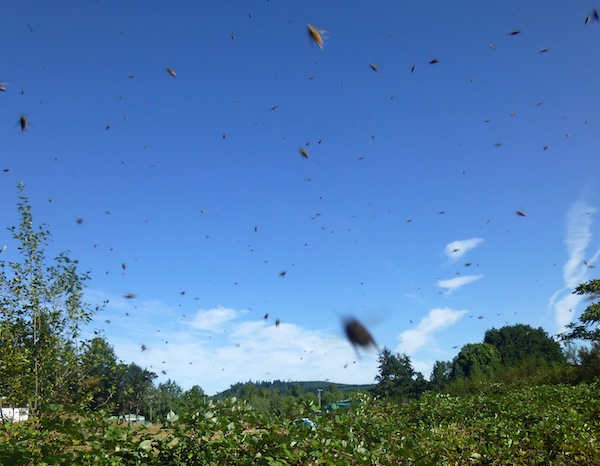 As for Brian and I - we love having the bees on our property and watching them pollinate our flowers and produce.

We just make sure to stay inside for a bit when Zack brings another hive, 'cause they can be kinda upset about the whole moving thing!