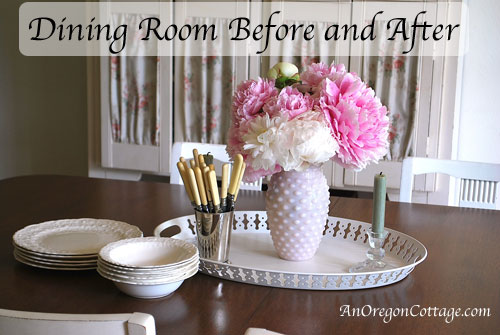 Note: I originally wrote about our house's transformation from a 1980's ranch to a "what-year-was-this-built?" cottagey-farmhouse in a multi-part remodeling series three years ago. I will be updating these posts over the next few months by showcasing the "before and after" of each room and going into more details (want to make sure you don't miss anything? Subscribe by email here or RSS here).

When we moved from the big city to an acre outside of a smaller town, my dream was to find an old farmhouse to fix up. However, this was during the housing-boom eight years ago and there was not much available in our price range that was stick-built (vs. manufactured). In fact, I believe we only looked at three or four homes and one of those was a foreclosure with questionable sellers.

Maybe I should mention that we had already sold our city bungalow (it was such a seller's market then- we had buyers 3 hours after putting our sign out!), and were living in Brian's parent's basement. So not finding many homes to even look at was a little discouraging, to say the least.

By the time we looked at the house we own today, I was willing to forgo a lot on my initial wish list. As long as it had some things I could work with (or around) I was willing to go for it. 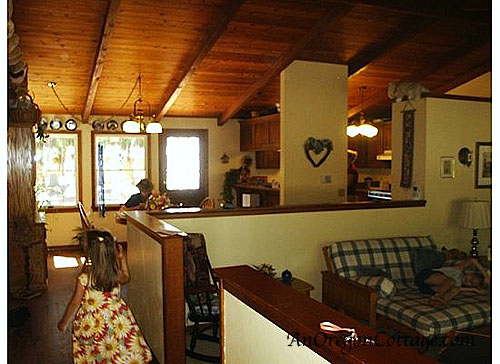 This was the view that greeted us when we initially walked in (not the people, though- we took this photo after signing the papers, but before the owners had moved - that's all their furniture...and stuffed animals!).

See all the lights turned on and how dark it still is? Yeah, that's how a warm summer day in August looked in this house. Every thing was dark, dark, dark. And since we live in Oregon where three-quarters of the year is gray, dark is something I always fight against.

Although it was a ranch built in 1982 (not a vintage farmhouse...) these were the things that convinced me we could make it work:

The first thing that had to be done, then, throughout the whole house before moving in was: 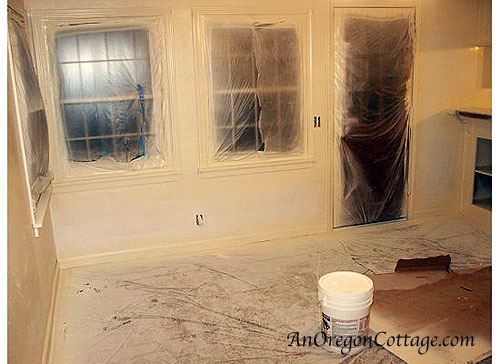 In the dining room this was simpler than other rooms: we covered the window, door and floor, and sprayed everything - the walls, moldings, and ceiling. 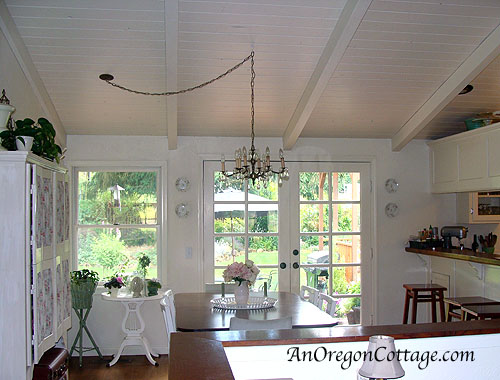 We then replaced one of the windows and the single door with a pair of multi-paned French doors and the "fake old west" light fixture with our $10.00 thrift store chandelier that came with us from our previous house. 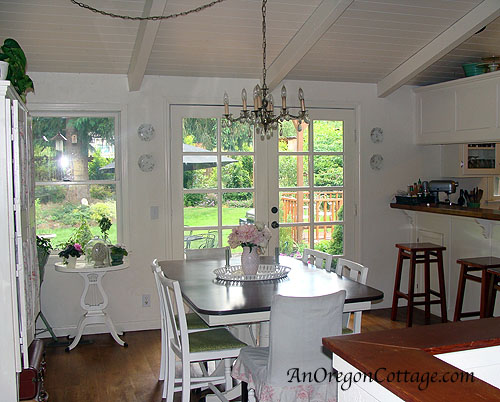 After buying some bar stools (Target) and adding our furniture (though this table and chairs are recent finds from last summer that I refinished), the dining room was complete.

And much, much brighter. 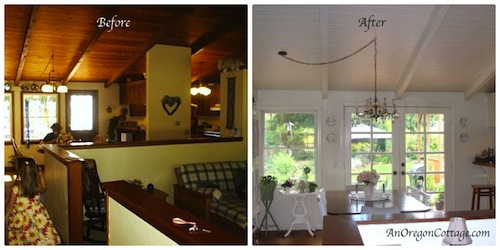 Here's a reminder (just in case you forgot from a few minutes ago...). Dark and dated to light and bright. Isn't it amazing what paint can do?

And while the French doors were not cheap, we've learned through our years of DIY-ing that we do what we can ourselves and scrimp where it doesn't matter as much, but it's OK to splurge on a few things that make a difference to us every day (um...maybe I should clarify that this was a $600 splurge and not a $20,000 splurge, just to keep perspective).

And seven years later I still love these doors and the difference they've brought to this room. Definitely worth it. 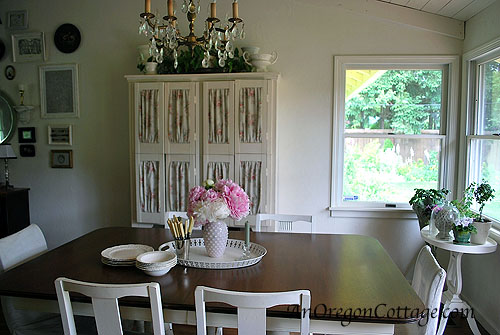 Making over your own dining room could be as simple as painting (a-hem...just a wall or two, it doesn't have to be everything in sight), replacing a fixture, and finding some furniture to rehab from Craigslist. Or it could involve adding doors, windows, or moldings.

For us it was a little of both.

OK, I guess it was a LOT of paint.

Have you remodeled a dining room? What advice would you give? And if you've posted about it, leave the link in the comments - I'd love to see what you've done!