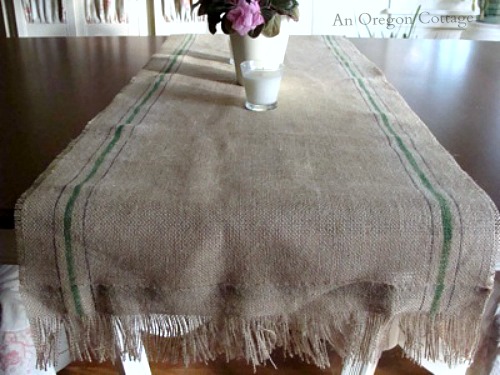 I’ve been wanting to make a burlap table runner for awhile now. I’ve been seeing them all over the blogosphere, most notably a fringed runner at Cottage and Vine that inspired my fringe (albeit simpler), and Mason Bay who included a tutorial on painting a stripe on the runner.

However, I wanted to make it with what I already had in my crafting stash, and I couldn’t do much sewing since my machine is on the fritz (ugh). I planned on it being a no-sew runner with a little fringe on the long sides and longer fringes on the ends.

However I discovered that my burlap piece was not long enough, so I did have to sew a little piece on each end (the huge loops my machine is leaving were not that noticeable on the burlap)- but if your piece is long enough, you won’t have to sew at all (except for some optional zig-zag stitches to keep it from unravelling so you can wash it).

I didn’t take many pictures as I was making it because, frankly, I wasn’t sure it was going to turn out. But when I saw that I was liking it, I snapped a few photos to share with you all, so you can make an easy painted burlap table runner, too. 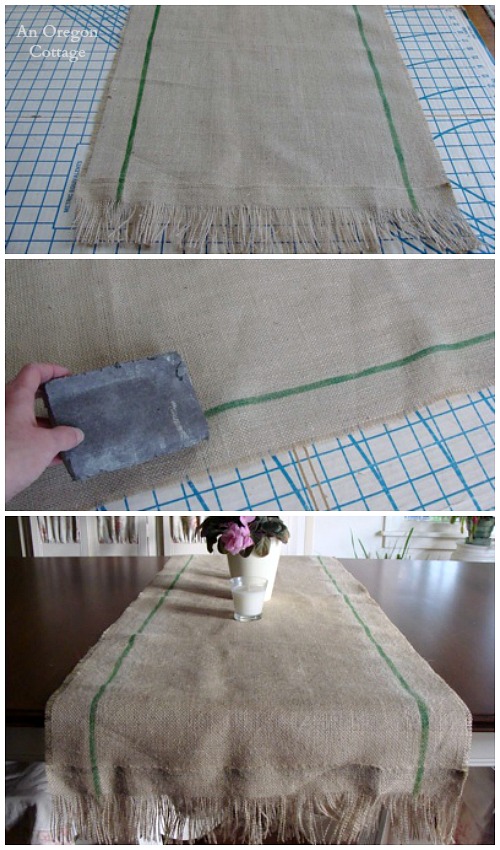 The top photo is the runner after I’ve cut, fringed, and painted it – here are the steps to create your own:

To paint the runner stripes:

I set the runner in my dinning room, but I just didn’t like how it looked – the green wasn’t doing it for me. Ugh. I realized should’ve used black paint. What to do? Paint over it? Paint the back side and make it reversible? These are the thoughts that run through a diy-er’s mind at times like this.

And actually, the reversible idea was a good one and I was on my way to get the black craft paint when I saw a black Sharpie marker. Hmmm – why not? It’s only burlap. Yep, first sand paper, then a Sharpie. Apparently it was one of ‘those’ crafting days. 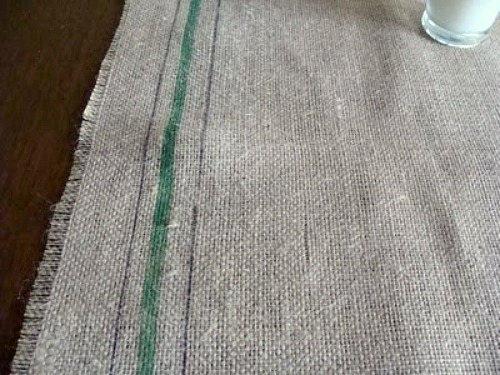 And guess what? I really liked how it turned out! I just laid a ruler down and ran the sharpie lightly over the burlap. It’s spotty and not too dark- just enough vintage-y looking for me. It adds the black and gives it a sort of grain-sack look that I like.

Sometimes you just gotta try things outside of the box, right?