I briefly mentioned my solution to plastic flatware for large gatherings last week when I gave some tips for frugal parties. I had so many comments that I thought the concept deserved a post of it's own instead of being buried at the end of a longer post.
I've always hated plastic flatware, but felt it was a necessary evil for large gatherings. It's flimsy and hard to eat with- there are some foods that will cause the forks to snap in half. It blows away in the wind. It's, well, plastic...in all plastic's gaudy-colored glory.
But most of all it's expensive for just one use. So in an attempt at frugality, I (and people I know) started buying sturdier, more expensive plasticware at the warehouse stores and then washing them.
What? Huh? Yeah, you heard me right, even though I think the idea behind them is to make it easier to clean up after a party. So it will come as no surprise that there came a day as I was taking a slightly melted fork from the dishwasher that I realized the ridiculousness of the situation.
And as I stood there I thought, "If I'm just going to wash these, why don't I just collect a bunch of real flatware at thrift stores and garage sales and keep them for parties?" 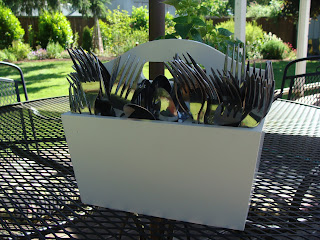 So I spent a few months with flatware on my list of things to look for when I went to these places and in no time at all, I had a caddy with dinner forks, spoons, and dessert forks that I found for .10 to .25 each.
I have more of the large forks now than the small ones, because we usually always have ice cream and spoons can be used for that as well. I thought about how we used the plastic flatware- there never seemed to be enough forks. And recently I've realized I do need some knives instead of raiding our regular silverware drawer, so I'll start collecting these this summer. 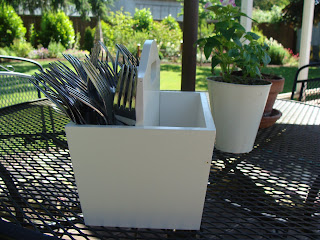 The flatware stays in this caddy all the time on a shelf in the pantry (just like plastic would) and is ready to go whenever I need it. I use the bigger part for napkins, but will probably put the knives in there that I've decided we should have.
Why not just use our regular flatware? There are a couple reasons, the first being that I don't have enough for 25 to 40 people. Another reason is that I don't have to worry if someone inadvertently throws a fork away with their plates (I do use compostable paper plates, but only if it's outside)- it was only a .10 fork and not one from our set. And since much of the time I use these we're outside, if any get left out or I find one in a flower border afterward, it's no big deal.
I also like having them ready to go when and even where I need them in the caddy, because an added benefit I've found is that I'm able to offer to bring these extra silverware to other gatherings where they might be needed. Again, with no worries because we all know there's more to be found in the bins at the thrift stores, don't we?
I love eating with real forks and so do my guests, so I will never buy another box of plastic flatware again.
And everyone just thinks I'm so eco-conscience and am into reusing and reducing. Little do they know it's just because I didn't want my fork to snap in half one more time...
-Jami
This is linked to:
Frugal Fridays @ Life as Mom
Favorite Things Friday
It's a Hodgepodge Friday