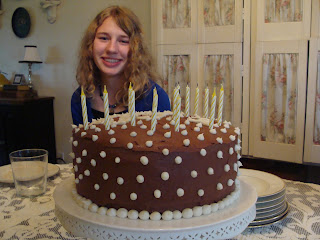 She’s my baby and she’s fourteen.

How does this happen? Oh, I know how it happens, but, ugggh…how does it happen? My heart bursts with love and pride at the same time it’s crying.

This is a weird, weird thing that just has no sane explanation. Although I’m comforted by all the generations that have come before and I’m sure felt these same contradictory feelings.

Ah, but isn’t she sweet? I’m awed by the fact that we’ve been priviledged to raise her and see her make great choices (and some dumb ones…) and grow into a loving, funny, special girl.

And here is her hair story:

Her hair was stick straight until about a year and a half ago when it started to have a slight wave. Then over the course of about six months it became curly. And when I say curly, I don’t just mean curly, I mean curls that make people come up and pull them to watch how they spring back into place like a slinky toy or something.

It was incredible, really. For awhile she hated it and continued to brush it as if it were straight which just made it more frizzy and big. But then she started to like it, began scrunching it instead of brushing it and soon she became comfortable in her own hair.

But she said to me a couple of months ago,”Mom, what if I become an adult and never go to a hairdresser? I won’t know what to do!”

As the person who’d always cut her hair (hey, we’re frugal!), I kinda laughed, except that I was at a loss with this curly hair and thought maybe it would be a good idea to get a good cut and watch how they did it so I could replicate it at home.

Enter a birthday and a Grandma who has a great stylist and decided to give her a gift of her first ever professional haircut and style: 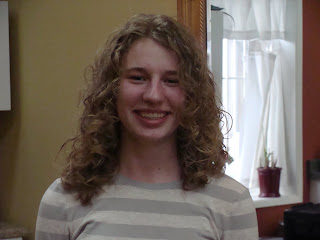 And guess what? She doesn’t just like her hair anymore, she loves it! See the face-framing layers? These really made the curls bounce in the front. 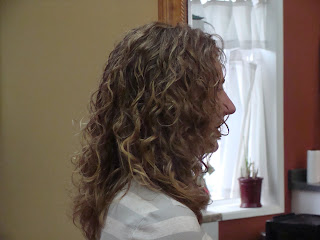 The stylist also showed her some tips to make the curls be more curly and less frizzy. Want to know the most surprising thing? He said she could use a little hand cream on her hair to control the frizz and make the curls more defined. 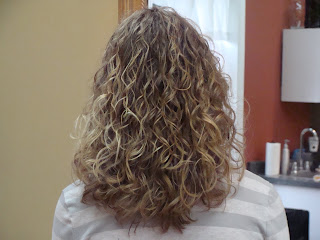 She still has some straight hair underneath in the back, and he really did a good job of bringing out the curl here.