Just in case any of you think I’ve got it all together and my yard and gardens look fabulous all the time, I thought I’d share with you a little reality. Welcome to my world: 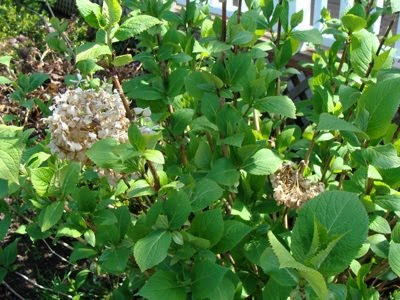 Where the brown, dead hydrangea blossoms from last season hang amidst the new green growth of April. 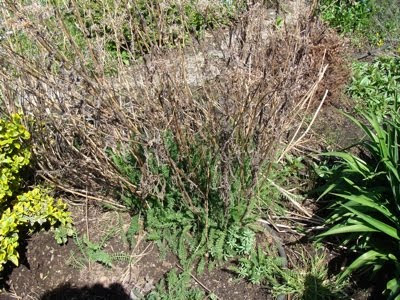 Where visitors see two and a half foot dead stalks of yarrow. 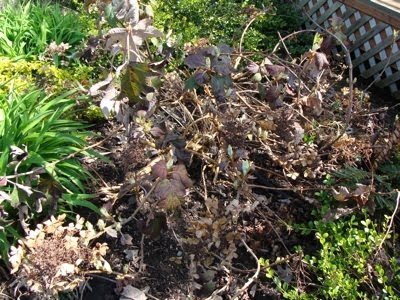 And a “Pee Wee” hydrangea that looks like this.

Although to be honest, I never know what to do with this- I’ve been very disappointed in this hydrangea, as it doesn’t get any real growth until mid-May and never looks like a nicely shaped bush. It’s got maple-shaped leaves that turn orangey-brown in the fall, but then the leaves stay all winter and looks like this in the spring.

I’ve concluded it shouldn’t be a front-and-center plant, which, unfortunately, is where I have not one, but two of these. Arrg. 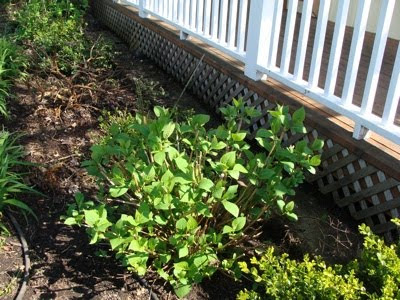 So, when the sun was out all day on Monday (after a very wet Saturday), I put everything aside and took care- finally– of this front bed.

And that stick thing on the left is the hydrangea after cutting the old leaves and blooms off. See what I mean? It doesn’t look so hot among all the lush new spring growth. 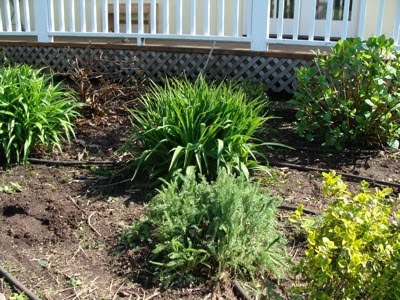 Two and a half hours later, it’s cut back, weeded, and the boxwoods and such are trimmed. I even moved a couple of things around. Those daylilies are probably needing to be divided this fall- I’ll see how they bloom this summer. I think they’ve been in about four years- aren’t you supposed to divide them every 3-4 years?

Honestly, though- I really like them big for this space. As you can see, there’s a lot of it.

I lost a pink heather that was in the empty spot on the left. It had been there about three years and looked healthy last year. It’s across from two others who are fine…I can never figure these things out, can you? 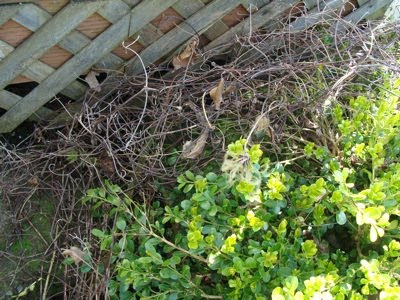 I ran out of time, though, and didn’t get to this lovely mess- the clematis. Yes, there’s some new growth in there somewhere! I’ve just tried to tie this (and one other) to the rail and post of the porch the last few years, but I’ve realized I need some type of trellis.

Which I don’t have yet. I was even thinking I could spray paint chicken wire white and wrap the post with it for the clematis to climb. Does that sound weird?

Whatever I do, I better come up with it fast, don’t you think?