I’ve seen some magazines (and bloggers) who have beautiful hoop houses that they use to protect their vegetables from frost and cold weather. They might be covered with plastic, spun row cover or shade cloth, depending on the time of year, but they always look tidy and neat.

This is my Oregon Cottage tomato cover (dare I call it a “hothouse?”): 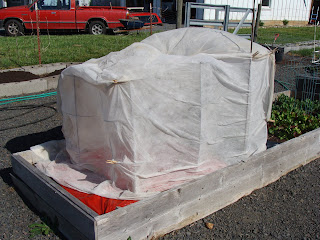 This is spun row cover held onto the tomato cages by clothespins. Fancy, I know.

I first did this two years ago after the tomatoes at our new place failed to produce like they should have (or at any rate, what I was use to at our old house). I noticed we had an almost constant Western wind that left the plants on that side stunted compared to the ones just next to them (it happened with other veggies, too. I’ve since planted a hedge as well). You can see in this picture the wind pushing the cover against the cages, which is pretty much how it looks every afternoon.

So it was sort of in frustration that I rigged this up using what I had on hand.

I think I had the idea that I’d cover them, then get some gallon milk jugs, fill them with water and place all around the plants in the cover to produce some solar residual heat (the same idea as Wall-O-Waters). Only I never got around to putting the jugs of water in there (surprising, I know). And I actually didn’t look at them again for probably 3 weeks (it was more like a month, but that sounds really bad for a gardener, doesn’t it?).

BUT, the tomatoes thrived in this makeshift house! I was actually shocked when I looked in and saw huge, green, lush tomato plants. The row cover only makes a couple degrees of difference, but it must moderate our fluctuating spring temperatures (not unusual for us to freeze one morning and be at 75 degrees the next afternoon) enough to give them a really nice start. What’s also great about it for the lazy gardener (that’s me…) is that row cover doesn’t have to be regulated like plastic does. Meaning, when it gets to 80 degrees, I don’t have to go out and open it- it won’t “cook” the plants or anything. 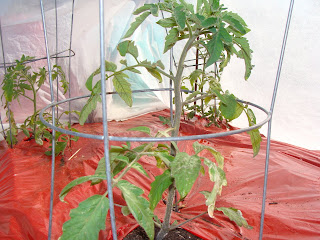 This is the inside view of tomatoes I planted about 2 weeks ago after starting them from seed. They have already doubled in size even though our weather has included lots of cold wind and rain during that period, as well as some nice days.

In case you’re wondering, the bottom leaves do not have blight or anything. They got a little sunburned during the hardening off period when I left them exposed on a hot day too soon. Ugh. Gotta keep it real here, folks! If I can grow produce, anybody can. 🙂

So if you’re having trouble getting tomatoes to ripen or want them earlier, try this easy method and see how it works for you.

Or make yourself a neat and tidy hoophouse.

In other garden news: 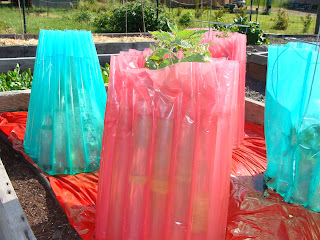 Here grows the tomatoes in the Wall-O-Waters. I talked about them before in my attempt to get early tomatoes. For us here, getting tomatoes in early July is a big deal and the 4th of July seems like the Holy Grail. It will be fun to see when the first ones ripen with the new varieties I tried this year.

They obviously like it and are starting to grow out of the Walls. I will let them grow for another couple of weeks (unless it gets really hot), then remove them and replace them with their cages. 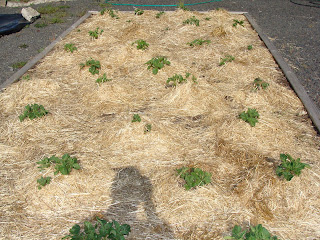 The potatoes are coming up nicely. I’ve checked occasionally to loosen any straw that seems too hard for the potatoes to get through, but that’s it. I will wait until they are a bit bigger before putting more straw on their hills. 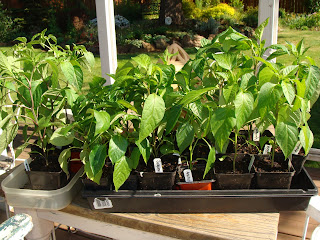 Lastly, these are the pepper seedlings I started back in March. Peppers like it really warm, so I just started hardening them off about 4 days ago with the idea I’d plant them in a week. I’ve had quite a few blossoms, but I’ve picked them off because I don’t want them putting their energy into fruiting right now.