I'm going to go a bit off topic today (just a bit, though- I am a gardener after all) to mention something that's important to me and to find out how you feel about it. A few months ago I signed a petition against the deregulation of genetically modified (GMO) alfalfa that was up before the USDA. Sadly, last week the USDA voted in favor of the big biotech companies and deregulated the use of GMO alfalfa with no oversight or provisions for organic farmers whatsoever. 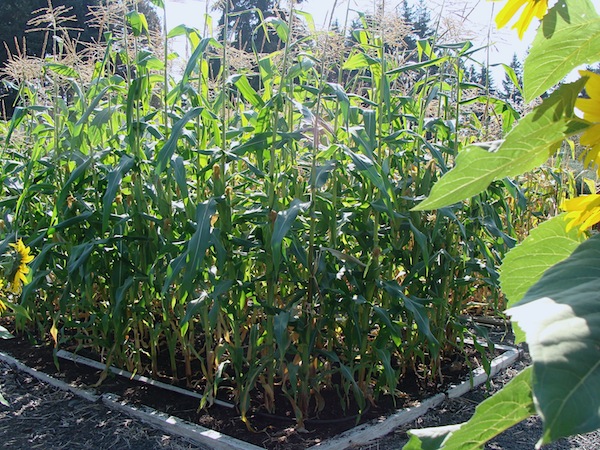 As an organic gardener, I've previously mentioned my opposition to GMO seeds and the differences between hybrids, which are just taking, say, two tomatoes with characteristics you like and cross breeding them to get one tomato with both characteristics (and, by the way, this can happen deliberately by humans or in nature from wind carrying pollen) and genetically modified seeds where something completely different is added to the genes of the seed.

Why? So that the ground around the seed can be doused with toxins and the seed still grow. Now, I've read recently that some organic foodies think that these GMO crops may be good and may actually decrease the amount of herbicides used today. However, the use of sprays is only one of the reasons I'm , , distrustful of the new GMO bandwagon.

Here are a few others (excerpted from an email I received from Stonyfield Farms president, Gary Hirshberg):

"We believe that these (GMO) crops are resulting in significantly higher uses of toxic herbicides and water, creating a new generation of costly “super” weeds; pose severe and irreversible threats to biodiversity and seed stocks; do not live up to the superior yield claims of their patent holders; and are unaffordable for small family farmers in the US and around the world. We believe that organic farming methods are proving through objective, scientific validation to offer far better solutions. We also believe that unrestricted deregulation of GE crops unfairly limits farmer and consumer choice.

The problem with the unrestricted deregulating of GE crops is that the dangers of contamination are permanent and irreversible. Whereas Congress has enacted other legislation to correct and reverse past transgressions, for instance the Clean Air Act and clean water legislation, a “clean crop act” would never be able to undo the damage and losses caused by GE crops."

Now, we as home gardeners don't have to worry (right now, anyway) of planting genetically modified seeds, as they are only used in large-scale farming. The most affected crops are corn, soy, canola, cotton, sugar beets and cane, and now alfalfa.

But in addition to the things Gary mentioned above is one other important thing I worry about that he does not mention:

What do our bodies think when we eat corn (or soy, or canola oil) that has been modified in such a drastic way?

The truth is, we don't know. And the European community is wary enough that they have banned GMO seeds and products. Hmmm.

Lest you think this doesn't touch you, most corn chips, mayonnaise, and salad dressings that are not organic (the certification doesn't allow GMO products) are produced from GMO crops. For more information on which crops are being genetically modified, read this article from Healthy Eating Politics- I think you will be surprised at the numbers.

This is obviously not a cut-and-dried issue and there are many different views revealed in just a casual Google search. But I'm curious to know-

What do you think? Are you concerned about GMOs? Have you thought about this issue? Do GMOs influence what you buy for your family to eat?

PS. Margaret Roach at A Way To Garden has a detailed write-up about it as well.