Home » Life » What I Did Last Saturday (Or: What My Husband Roped Me Into)

Have you ever said "yes" to something you were asked to do that sounded simple and then it morphed into something much bigger?

As in, if you knew everything that was involved you would've never said "yes?"

Well, that's exactly what happened when Brian asked me to do "a couple of sewing and written projects and a small video in the summer of you sewing with a group of ladies.' Now, it's not unusual for Brian to ask something like this of me- he has clients in the craft/sewing world (you can see some of my projects at Sew 4 Home) and I thought being filmed with a group of women sewing didn't sound that intimidating.

After all, he and I have made some videos for you guys, and it wasn't that bad. Except now that I think about it, it's really Brian making the videos and dragging me along with him.

But in the end, what I thought didn't matter, because it soon became clear it wasn't really going to be a simple little video like the ones I'm used to, but one that involved this: 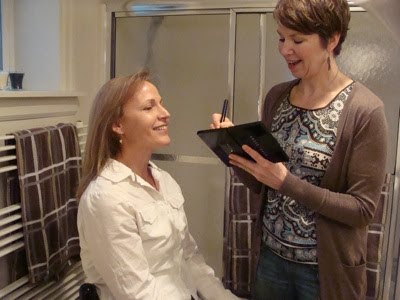 Hair and makeup. By a real-live, honest-to-goodness, employed-in-the-industry makeup artist (that's Susan, by the way, and she was fabulous). I never knew how relaxing it can be to have someone put makeup on you.

I'm starting to think it was better when I didn't know that.

And yes, she worked her magic and eventually got rid of the glaring forehead shine. 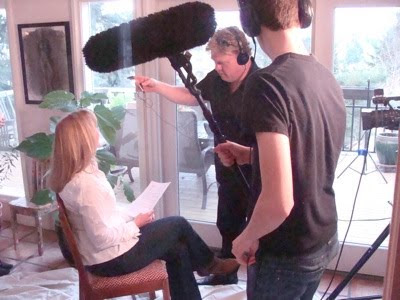 And this: A boom microphone and glaring lights along with the camera and crew. 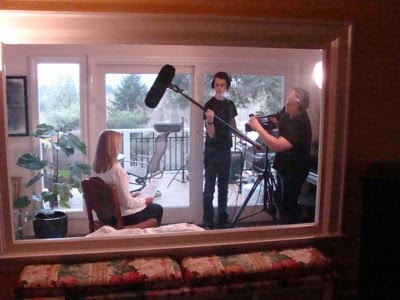 Well, two people seemed like a crew to me. Luckily, the producer/camera guy is Brian's cousin, Clark, who's really talented and used to working with non-talents like me. Plus I know him and had less to be nervous about. 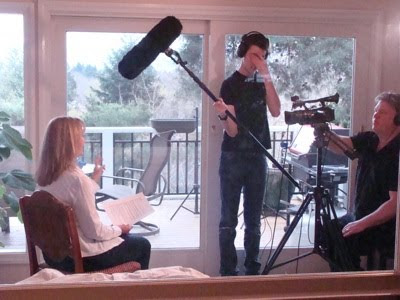 Looks like I should've been more nervous about the boom guy, Nick. Poor guy, looks like I'm giving him a headache with all the takes I needed.

Oh, did I mention there was a script?! But I didn't have to memorize lines- just touch on the points they needed in my own words.

Over and over. Ugh. And I usually had no idea what I had said the take before.

By the way, we were filming in a beautiful older house in Portland- this is the sunroom, and Brian is taking the pictures from the living room. It had all the things I love about old houses: a great entry with stairs, wood floors, wonderful french doors, cool original light fixtures, and this one had a great view of Portland. 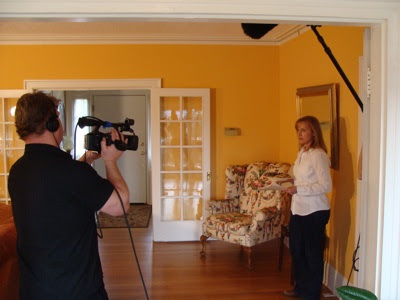 Oh my, and I had to act, too- carrying cookies, walking and talking at the same time while being filmed. Can you say uncomfortable? 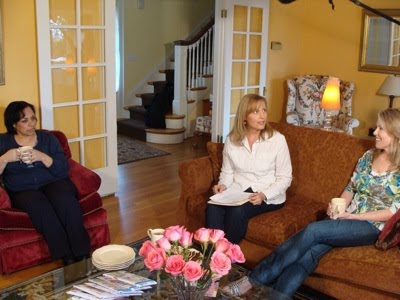 Thank goodness there really was a group of women, though! And they were the best thing about a day that was mostly out of my comfort zone. None of us were used to this, so we all messed up and laughed together. That's Joyce on the left (who I knew, but hadn't seen for years) and Debbie on the right, a new friend who's friends with Brian's sister. 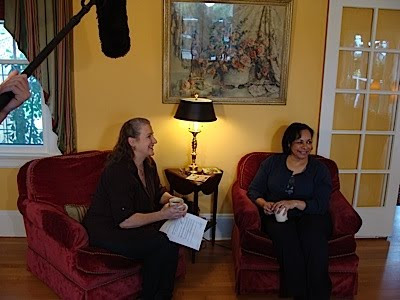 Our group included my new friend Kathy, too, who neither Brian, I, nor our family knew previously- so I guess that means you're not safe even if you don't know us.

Kathy works in theater, so she at least had some inkling of what was going on, though she's used to dealing with the sets and things. 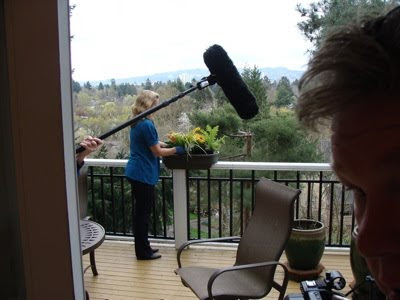 And this lady doing the flowers? Don't let the I'm-just-here-doing-the-flowers pose fool you- she's the one in charge of the whole shoot-n-shebang, Liz.

The lovely Liz, who works with Brian and I've known for a long time. I wonder if she always asks Brian to talk to me about these "projects" instead of me directly because she knows how he underplays them... 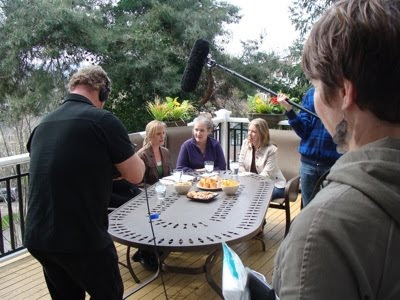 OK, if you're with me this far, you're going to love this:

There were also three wardrobe changes, along with more hair and makeup. We moved outside on the deck for "day two."

In April. In Oregon. Can you say, "cold?" Actually, it could've been a LOT worse- it didn't rain or hail. In fact, the sun came out a couple times. 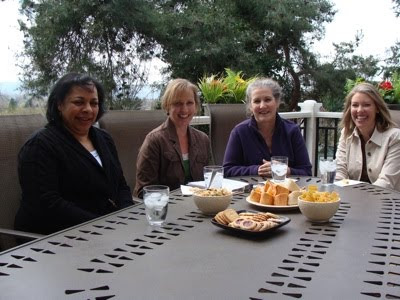 Which totally ruined the shot for Clark- too much glare and shadows - so we had to wait for the sun to go behind the clouds again. A scene that was replayed about four times.

I can't believe we were unhappy about the sun.

But only for a few moments on a Saturday that I'm glad to have behind me.

Oh, did I mention that there are at least two more video shoots?