Get inspired vegetable garden ideas from this tour of Arizona’s Agritopia – a planned community in the Phoenix area that produces food most of the year in it’s large garden area. 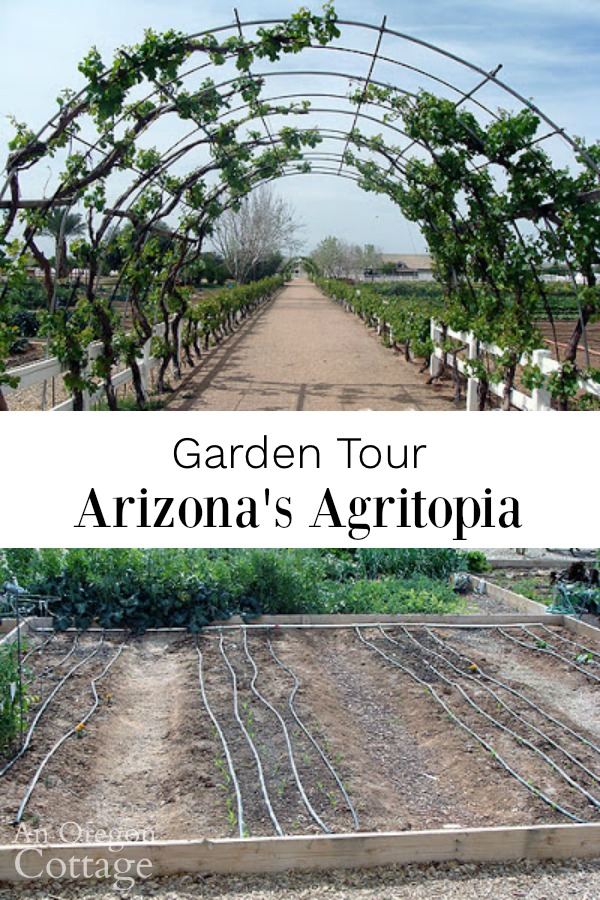 At the end of March we left a record snow in our area (winter in spring?): 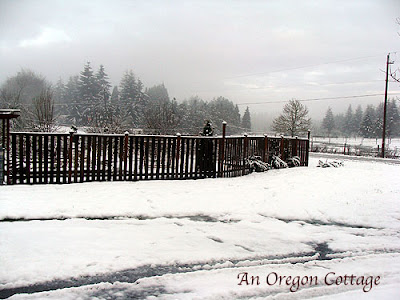 To fly a little over two hours to the south and experienced this: 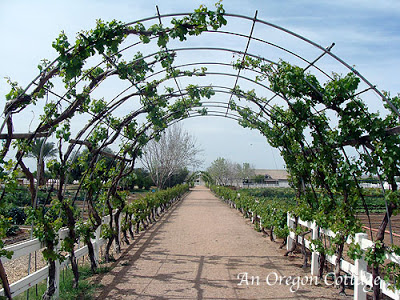 The blue skies of Arizona, 80 degrees, and grapevines leafing out!

Yes, I was in heaven – nine days of it before returning to our rainy skies – and while we were there, my sister-in-law took us to a really cool place in Gilbert that I thought would be fun to share with you. 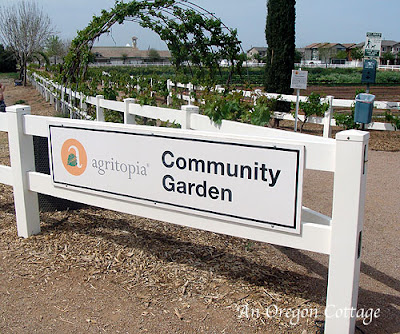 Have you heard of Agritopia? I had actually read about this in Sunset magazine a year ago and had wanted to visit it the next time we made a trek south. My sister-in-law knew just what I’d like!

Agritopia is basically a planned community of houses (sweet bungalow styles), a school, restaurant, coffee shop, and a large community garden that provides vegetables for the restaurant and a weekly farmer’s market.

I wandered the gardens snapping pictures to glean ideas and inspiration and see what the other half of the gardening world looks like now (those of you in the south are going to find normalcy- but remember what I had left just two airplane hours to the north!). 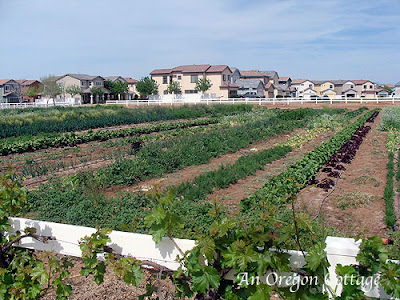 On one side of the grape tunnel in the first picture above are the large fields that provide produce for the restaurant and farmer’s market.

These are lettuces, onions, herbs, and some cabbage, though most of the cabbage and broccoli I saw had gone to seed. I wonder if they collect the seed? 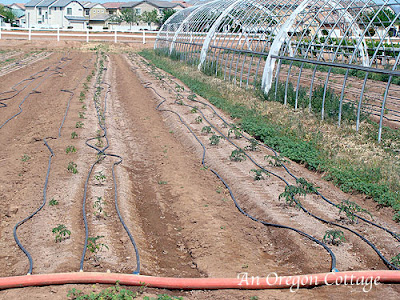 While this area is traditionally tilled, they are using the wide row system to plant the crops – essentially a raised bed without permanent borders – and watering with soaker hoses.

In the heat of the south, getting water directly to the roots is doubly important, and there is also less evaporation than overhead watering. Also, no water is wasted watering the paths.

I was surprised not to see any mulch – to keep weeds down in the paths and keep the ground moist between plants. I was also surprised to see how small the tomatoes were – since it was so warm already, I just expected them to be bigger. 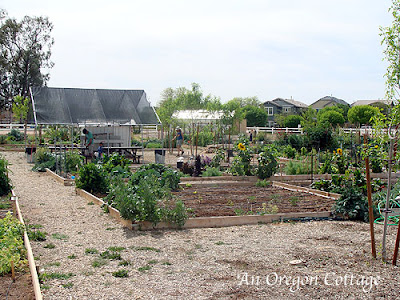 On the other side of the grape tunnel and grape-lined fences (great use of space, by the way- grapes were growing on most of the fences throughout the garden) were the permanent raised beds that could be rented out by the homeowners.

They were made with simple pine 1×6 boards and the permanent paths looked like shredded tree clippings. A shaded area with picnic tables in the center is probably most welcome to the gardeners. 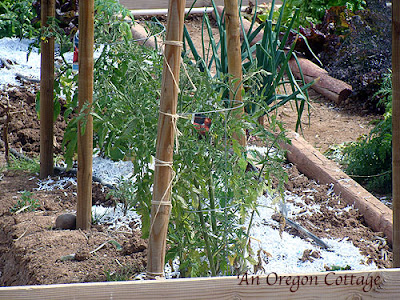 And guess what? I found the big tomatoes I was expecting here in the tenant’s beds! Mine won’t look like this until July (if I’m lucky and practice all my techniques for getting early tomatoes ). 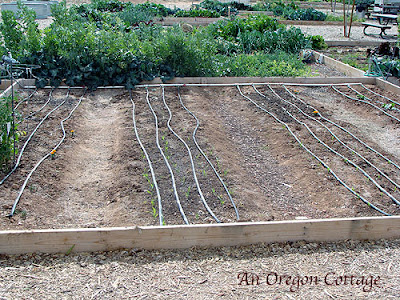 This was interesting- the beds look like mini versions of the larger fields of vegetables with wide rows lined with soaker hoses (could be drip tubing- I didn’t look closely).

I’m assuming it’s because the size of the beds that are rented out are too big for regular raised-bed practices – they can’t be reached across, so paths need to be made.

Guess what’s sprouting in this bed? Corn! In March! Yes…a whole new experience for me. 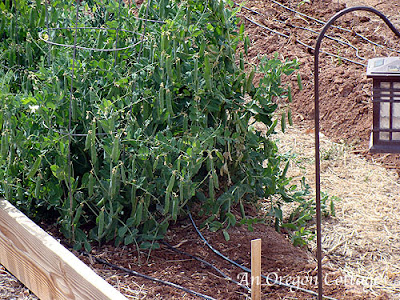 And the peas are producing like mad – I haven’t even planted mine yet (that’s on my to-do list this week).

Notice the straw in the pathway of this bed? Some of the neighborhood gardeners think like me, I guess – you know how I love my mulch, be it plastic, newspaper, or compost! 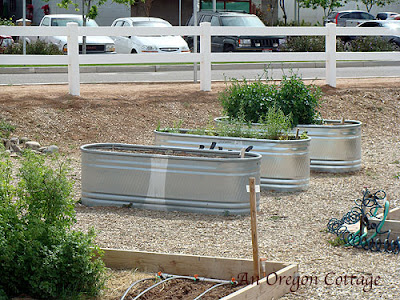 There were also a few of these water troughs used as beds. I wonder how they work in the Arizona heat? 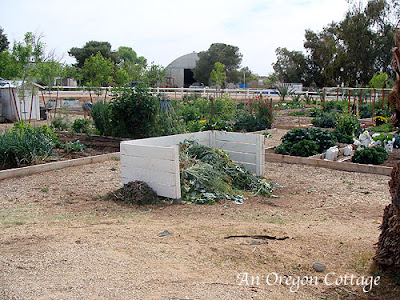 The community garden compost bin was a simple three-sided rectangle. I really need to build something like this- right now we’ve just got a pile in the pasture. 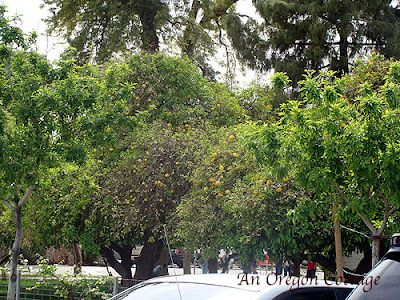 And being from Oregon, this was the most fun for me to see- citrus trees fruiting and in bloom! Oh, the scent was heavenly! We picked and ate fresh tangelos, oranges, grapefruit, and made lemonade with huge lemons.

Did you know that lemon trees have thorns? Like, really big thorns. I needed a Band-Aid, but it was worth it!