If you recall, this is what we inherited when we moved to this house six years ago: 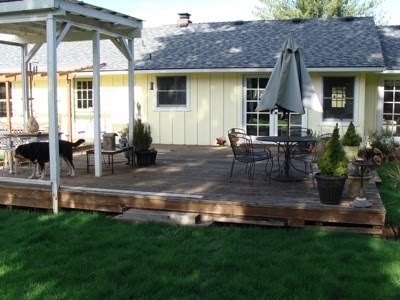 A huge deck. As in, gargantuan. And very square. And boring. And without purpose (I mean, it's a foot off the ground for goodness sake!). 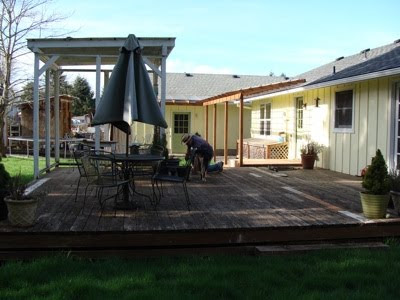 And very, very hard to figure out how to use. Look at that expanse of bare decking. How do you use all that? And what's with the roof-thing in the corner? It's too exposed to be an outdoor "room" and has a heavy, shed-like roof.

Oh, did I mention it gets southern exposure? Yes, it gets very hot out there in the summer.

All in all, there's not much to induce you to spend some time in the backyard.

But if I'm completely honest, we would have lived with that huge deck for longer if it weren't for this: 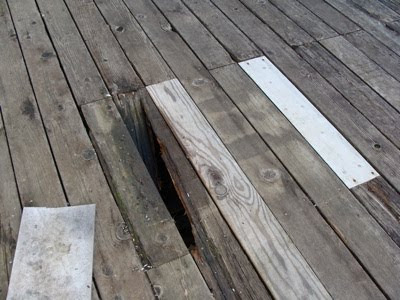 Rotting wood. Patched in some places and holes in others.

We didn't want to pay the presumably huge amount of money to replace something we didn't like (and became dangerously slippery when wet, which, um, happens a lot in Oregon...), so a few months ago Brian started tearing it apart. 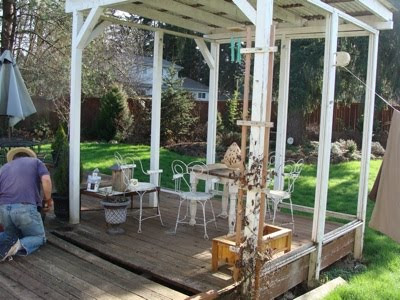 Step one was pulling the boards from around the corner structure but leaving the deck in place under it (which isn't rotten, thanks to the covering) in order to make this into a gazebo-style shelter with railings, steps, and a nicer roof. 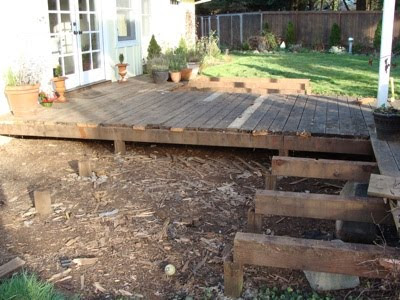 Step two was pulling the rest of the boards off, stockpiling any good ones and recycling the rotten ones.

Yes, we have a landscape supply company in our area that recycles treated wood into something called "hog fuel." We still have to pay to dump it off, but only a minimal amount. 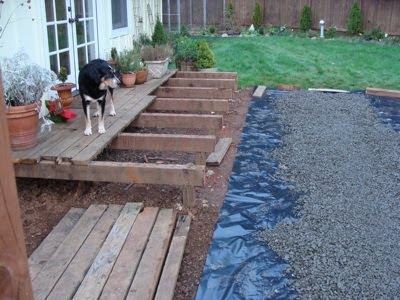 Step three was to lay some plastic and gravel down to cover the exposed mud so our dog wouldn't track it inside.

As you can see, we're keeping a small porch-deck off the french doors. And we're keeping the posts and 4"x6" treated beams that were still in perfect shape. 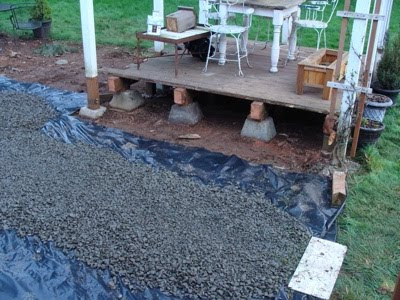 Brian added deck blocks to support the new gazebo where he cut off the 4"x6" beams. 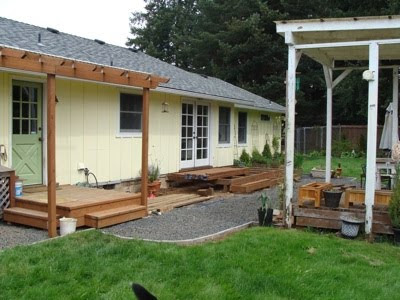 Step four was to make walkways to the new gravel patio from the back doors of the house- one here to the laundry/mud room and one on the other side to the master bedroom French door. We also added cement edgers all around the whole area to hold the gravel. 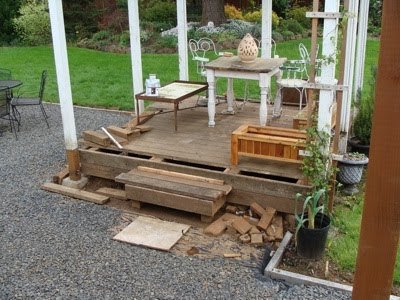 Step five is making (notice the change from past to present tense?) the steps for the gazebo and back porch. Brian will also patch the wood as needed and we'll make some small planting beds on each side of the step.

Don't you think it's already taking shape and looking so much more "user friendly?" I can just picture this gazebo with rails, a daybed, table and chair, and maybe an outdoor chandelier and some canvas curtain panels...what do you think? 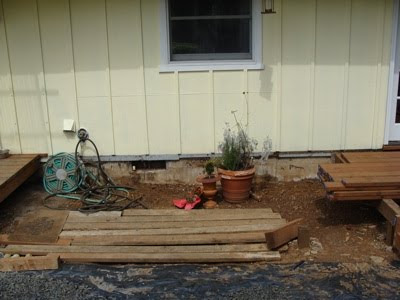 And this area? I'm most excited about this- my new herb garden right out the back door! I finally won't have to water so many pots and I found that the herbs I had in the ground at our other house did so much better.

As you can see, we've still got quite a bit of work to do, but seeing my vision (which I've thought about for years) take shape is so rewarding and fun. This area just makes so much more sense to me, with various garden "rooms" to keep it interesting. We already think losing the deck makes the yard look bigger, and the few times the sun has been out, the gray gravel has seemed a lot cooler than the deck.

In my bigger dreams, we'd have a real porch with a peaked roof and we'd screen it from pesky bugs and probably lay a paver patio. But what we can afford right now is this and the gravel, which I've recently seen in a number of garden magazines- it seems very European- which helps to make it seem less "unfinished" to me.

The real issue will be how easy it is to sit on the table and chairs when they're sitting on gravel...