June is a beautiful time in my PNW zone 8 garden! The flowers are almost at their peak, we're harvesting spring foods, and planting to take advantage of the rest of the season. 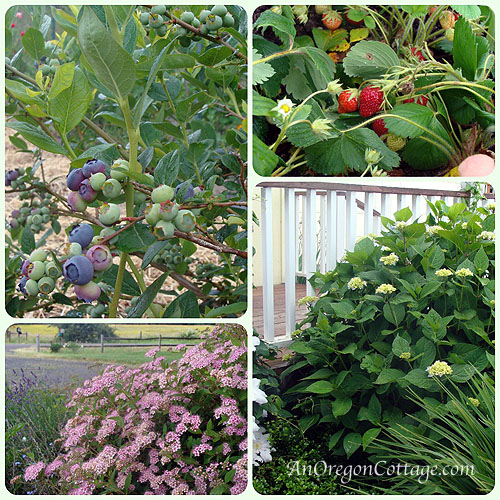 I thought I'd share with you some of the things growing around our little cottage garden acre.

June is one of my most favorite months here in Oregon with so many things blooming, fruiting, and producing...and nothing dry or brown yet. Believe it or not, we're so dry in July, August, and September that by the end of July everything is brown - only the trees stay green! So much for rainy Oregon.

I've been picking strawberries for more than a week, but I was surprised to go out today and find that we've got some ripe blueberries already. The bushes are just loaded with berries this year, so this is just the beginning of a month or more of harvesting blueberries- yeah!

Our hydrangea here are just starting to bloom, while the spirea are at their height of glory - they have such a delicate, airy bloom. 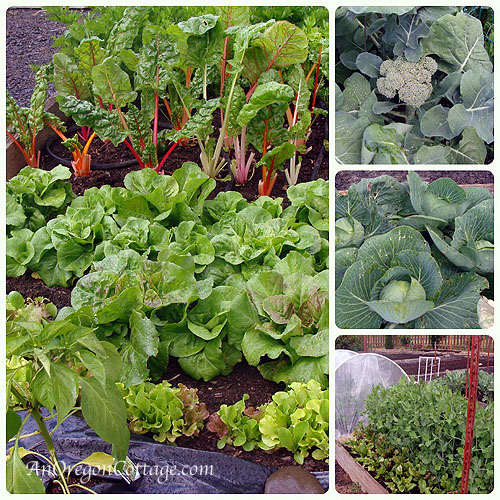 In the vegetable garden, I'm harvesting chard, celery (behind the chard above), lettuce (both cut-and-come-again and heads of buttercrunch, romaine, and red leaf), broccoli, and cabbage.

I'm waiting to see if I'll get any peas before it gets too hot, because I planted them rather late this year. 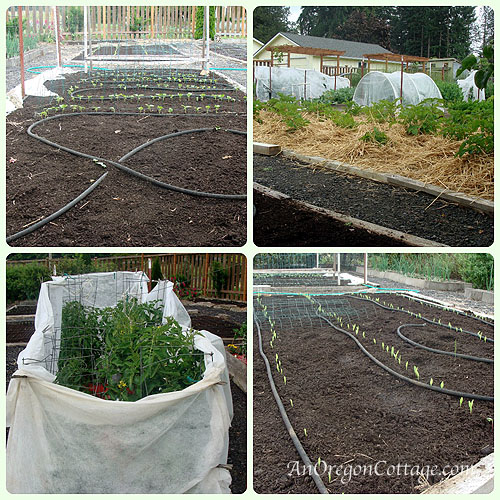 I was happy to see that the corn and beans seedlings are safely up - the last couple times I've looked, it seemed like the birds were pulling them up as fast as they sprouted!

I covered the beds with chicken wire and row covers. But that's also why I usually sow pretty thickly and thin later. I learned after having to re-sow corn at least two times one year. Sigh.

Tip: See how I plant corn to be WEED-FREE all season long here.

I put another layer of straw on the potatoes to hill them up and the early red variety is sprouting pretty purple flowers.

Some of the bigger tomatoes are flowering, too. I still keep the row cover around them because we get a lot of wind in our garden and this time of year it is often a chilly wind. You can go here to see how I plant tomatoes so that they thrive - and why planting under cover is a good idea.

I have all different sizes of tomatoes this year since I failed to start any from seed. Thankfully I got some small starts from my friend, Shannan, and then I bought some gallon-sized tomatoes as well as some regular-sized ones that were more economically priced.

It will be fun to see the differences in ripening depending on the size they were when I planted them.

Update: it didn't really make a difference in the end! I think it's because of the way I plant tomatoes and cover them!

What do you have growing in your gardens?