Tips for harvesting potatoes, curing, and keeping them for long-term storage. Plus the tomato and pepper varieties that ripened earliest.

August is always an exciting time in our gardens, isn't it? There are lots of things to harvest in the garden and I find myself looking daily to see if the tomatoes are ripe yet and what else is ready to be picked.

In the first weeks of August this year, I found the first tomatoes, peppers and saw that the potatoes were ready to be harvested.

And after sharing about planting potatoes this way with straw, I'm excited to show you how easy they are to harvest! Read on for harvesting and storage tips, plus what I found out about the few potatoes that were rotten - and what I can do about it in the future. 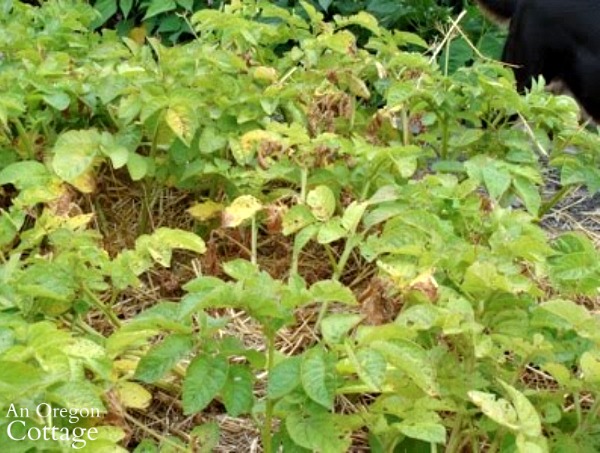 When most of the potato tops have yellowed and died down, it's time to harvest.

These potatoes were planted using the modified straw planting for slugs, and you can see it worked really well. The potatoes being harvested are the variety 'Red Norland' which is an early-to-mid season thinner skinned potato.

I probably could've waited a bit longer to harvest these - if you wait until the tops are mostly brown, the potatoes will be tougher and better for storage. The tops are usually mostly dead at this point in a normal summer, but we've been on the cool side and I knew it had been long enough. Plus, I was too impatient! 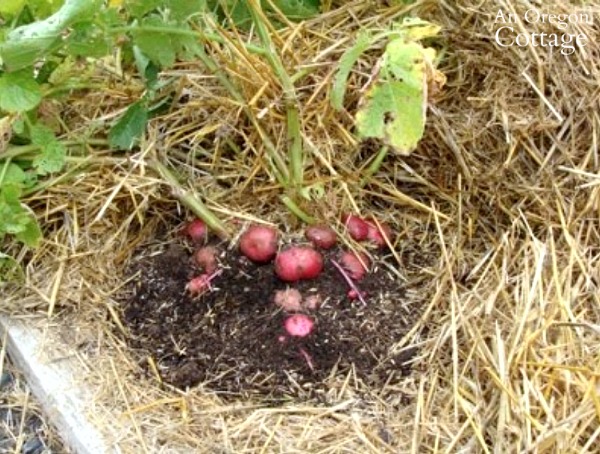 Pull back the straw to reveal the potatoes.

When you pull back the straw used to hill up the potato plants, you will see something like this - isn't it fun? I LOVE harvesting potatoes, it's like a treasure hunt! 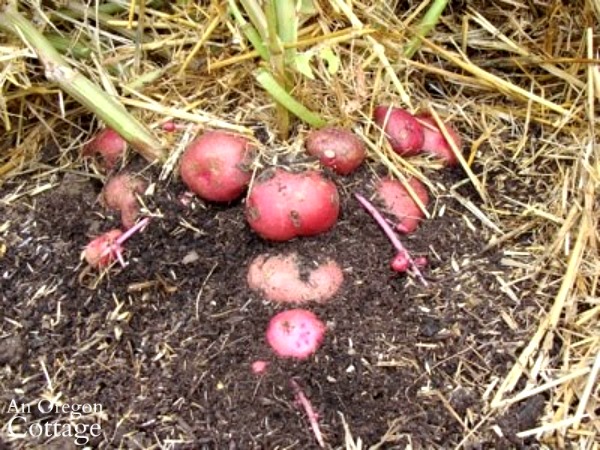 Remove the tubers from the soil.

As you can see, starting the seed potato deeper in the ground and waiting to hill up with straw produced more tubers underground than when planted shallowly and covered with straw from the beginning.

It was just as easy to plant, care for, and harvest, and having slightly dirtier potatoes is a small price to pay for plants that don't get eaten by slugs as they're trying to grow!

TIP: Instead of a shovel, use a garden fork to gently pry under the tubers and loosen them from the soil. You'll get less cuts in the potatoes.

Move from plant to plant that look ready to harvest, using the fork to loosen the soil and picking the potatoes to add to buckets or a wheelbarrow. Any plants that are still pretty green, just make sure the straw is still firmly around them. 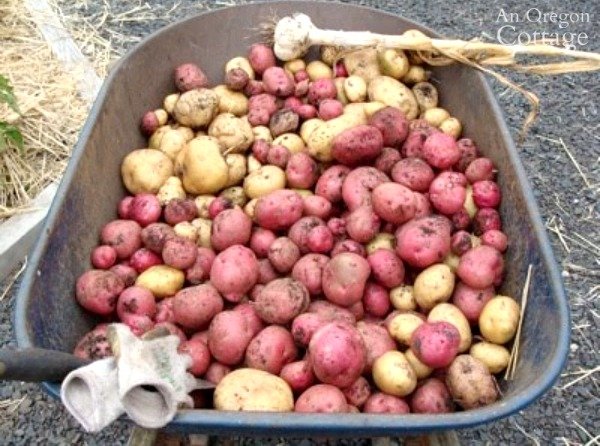 Separate the potatoes and cure.

The harvest pictured are early varieties, Yukon Gold as well as the 'Red Norland' variety I mentioned earlier, and when I was done I had a wheelbarrow full. There were still some late russets in the garden that were still flowering.

At this point, you'll need to separate out the potatoes into three groups:

You'll want to wash and eat the potatoes from the first group right away, since they will be the first to spoil in storage. Just cut out any areas of damage and use as normal.

The second group can be cured with the third group, but they should be put into a box or basket to be eaten soon after the first group. Again, cut off all damaged or green areas. For heavy scab, I just peel the potatoes and use them for soups or mashed potatoes.

Cure the third group with the most care, as these will be your potatoes that will store the longest (TIP: red potatoes are usually the shortest lived in storage, so even in the third group you should eat the reds first.)

How to Cure Potatoes

How do you store potatoes to last?

Many people have basements or cellars to keep potatoes in the desired cool, dark place with lows between 40-45 degrees. What to do if you don't have an area like this? Here's the method I came up with and it works great!

I can keep potatoes for months like this in the garage and they are insulated from any extreme lows in our area (we have pretty mild winters, though, with just some mornings dipping into the 20s).

What about losses to disease and bugs?

I did have a LOT of potatoes in this harvest that I couldn't use because they were rotten or so deeply covered with scab that bugs had gotten inside. It was definitely more than my normal losses, which I'm wondering if it had to do with our above-average cool and wet spring?

I also had a number of large potatoes that disintegrated into a white, gooey, really gross mess when I grabbed them from the soil, and I've NEVER had potatoes do that before. They looked like regular potatoes on the outside - until I grabbed them. Yuck.

When I did a bit of research I found out that this is called bacterial soft rot caused by a bacteria called Erwinia, which can enter the potato through wounds, injuries, or even through natural openings in the skin. According to this article, it was probably caused from our wetter than normal spring:

Since bacterial soft rot thrives in water, avoid heavy watering of newly planted potatoes. Don’t irrigate your beds until the plants have fully emerged. Avoid high nitrogen fertilizers since heavy top growth will provide a moist canopy and watch for low spots where rainwater collects. Plants grown in these areas are almost guaranteed to suffer from soft rot disease.

To avoid this in the future, rotate where potatoes are grown (I already do this), clean up all debris early (I'll have to get on this earlier), and try not to water more than necessary. Hopefully a drier spring will also help! 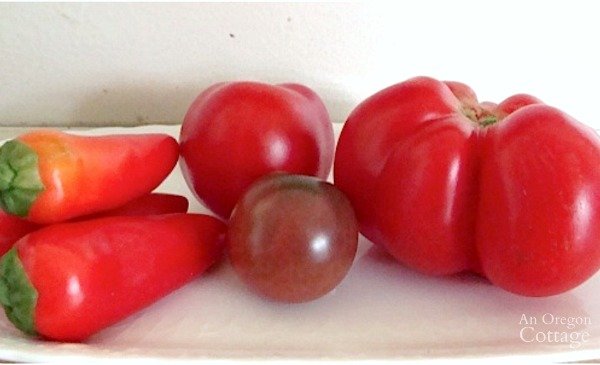 I picked the first ripe tomatoes and a couple of ripe mini peppers in the first weeks of August, which was only a couple weeks later than last year - surprising after our record-rain spring. Since we home gardeners are always trying to get the tomatoes to ripen early, I thought I'd share the varieties that worked in my garden.

The big tomato on the right above and the smaller one next to it are an ultra-early variety called "Glacier." The big one was actually ripe last week, and this week I have a handful of other, smaller tomatoes from the same plant. The flavor is OK - but of course it tastes wonderful because there aren't any others competing with it yet, ha!

However, the small cherry tomato in the front is "Black Cherry" and I'm growing it because of my friend Shannen's recommendation from last year. Typical of a cherry tomato, the plant is out-of-control so I almost didn't notice there was a ripe tomato in there! The color is similar to my favorite heirloom, Cherokee Purple and I'm happy to say that the flavor is INCREDIBLE. These are the best cherry tomatoes I've ever tasted - and I'm not a big cherry tomato fan, they're usually too sweet for me.

I will never be without Black Cherry in the garden again!

It's probably not surprising that the first sweet peppers to ripen were mini peppers (And remember, ripe peppers are always colored - green means immature! ALL peppers ripen from green to a color.).

The three mini-peppers pictured on the left of the tomatoes were grown from the last of the "Tri-Color Pepper" seed packet (which I've only been able to find at Nichols Garden Nursery- at least the type that have very few seeds).

This is the third year I've grown them (from the same packet!) and I love how they quickly ripen to full color because they are small - just like the ones they sell in those bags at the store. There are orange and yellow peppers, too, but I don't know what I've got growing yet - that's part of the fun of starting plants from seeds - sometimes you're surprised at harvest time!

What varieties of potatoes, tomatoes, or peppers do you like to grow?