Tutorial and tips for how to quickly and easily freeze snap peas without blanching – or snow peas – to be able to enjoy them longer than their short season.

A few years ago I shared a harvest photo of our three types of peas, and I realized I needed to find a way to preserve them. The window for fresh peas is typically short – hopefully three weeks to a month before the hot weather does them in. But freezing is a way to be able to have garden peas a little longer.

And because of the popularity of that article, I went ahead and froze the snap and snow peas without blanching.

How did freezing snap peas without blanching turn out?

We tried them after a week of being in the freezer and liked the results better than the wimpy, over-cooked, squeaky blanched snap peas of my past (similar to the beans…).

We then also tried them at 1 month, 2 months, and 3 months before we ran out of frozen peas and they were still better in my opinion, though they were a bit more soft.

Since snap peas do seem to have more water content than beans, the pods do not come out crisp like fresh, but the inside peas do, and the flavor is still sweet and pleasant with the bit of crisp. Snow peas fair a better, probably because there’s not as much air in the pod as snap peas.

I do want to say that this is one of those try-it-and-see-if-you-like-it type of methods. Do a bag like this and see if you like it before preserving your whole harvest this way.

As for me, this is much better than the alternative than blanching, just like with green beans!

How to Freeze Snap Peans Without Blanching 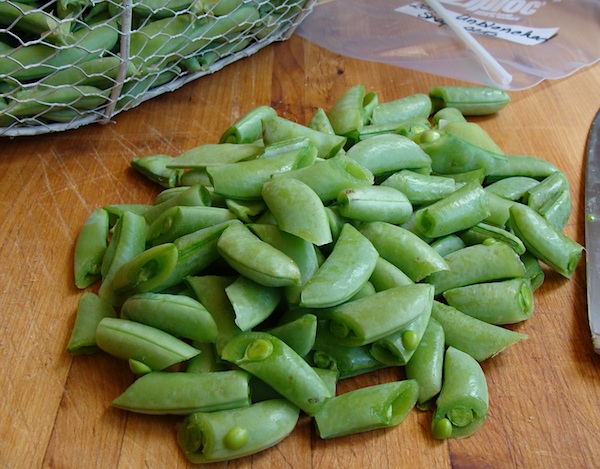 Part of the reason this method appeals to me, besides how they come out of the freezer, is because it’s so quick. That’s the thing I love most about eliminating the whole blanching process – well, that and not having to deal with boiling water when it’s hot outside. 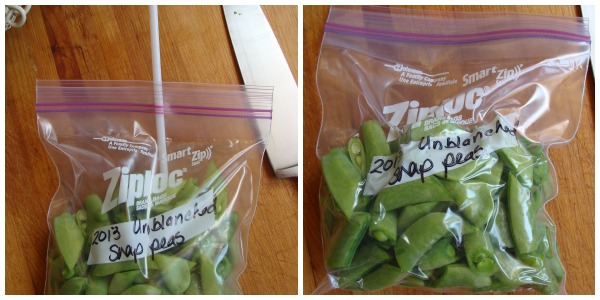 I don’t want to leave you without a reminder about my cheap trick for removing air instead of using a seal-a-meal (or whatever they’re called – which if you have, great! I just don’t want the added expense):

How to remove air from a baggie using a straw:

Does it remove all the air? No. Does it work as well as those seal-a-meals? Probably not.

But does it work better than simply using your hands to remove the air? Yes! Plus it’s quick and easy, and I don’t have to buy a gadget or special baggies. Also, I reuse these strong baggies over and over for regular storage when they’re done in the freezer, which you can’t do with the sealed bags.

How To Cook With The Frozen Peas?

While they aren’t as crisp as fresh, I’ve found the frozen peas still work well in these dishes: 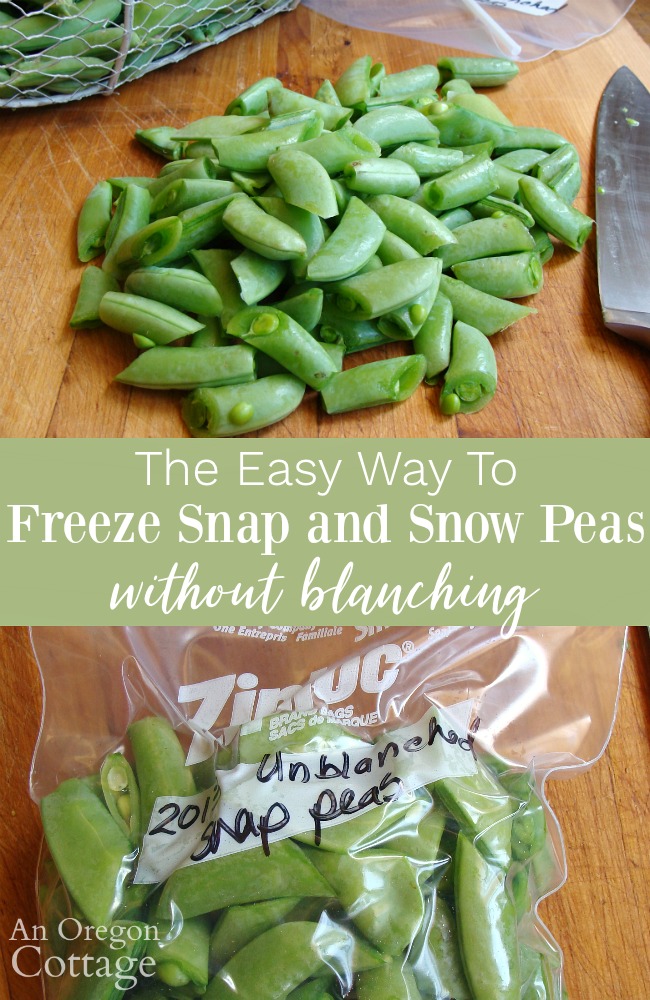 What about you – have you ever frozen peas? What’s your favorite way to ‘put up’ peas?

This article has been updated – it was originally published in July of 2013.

Keep track of the recipes you love & how much food you put up from year to year! Free with subscription to AOC's popular weekly newsletter full of useful information, behind-the-scenes updates, occasional offers and TONS more printables in the VIP Subscriber Library. We'll never send spam - read our Privacy Policy here.