Ready for a different podcast experience? We recorded this episode live on our street-level balcony near downtown Austin, Texas! Because we were staying in the busy Red River Cultural District, you'll get to hear lots of cars, an airplane, and even some panhandlers asking for money. In other words, a true Austin experience.

On that balcony, we share where we stayed, some of the great experiences we had over the course of our time in Austin, and the restaurants we discovered in our attempt to cover all the Austin-food bases. And because we're on the road, we're recommending some travel items that we've loved - and lots more of course. 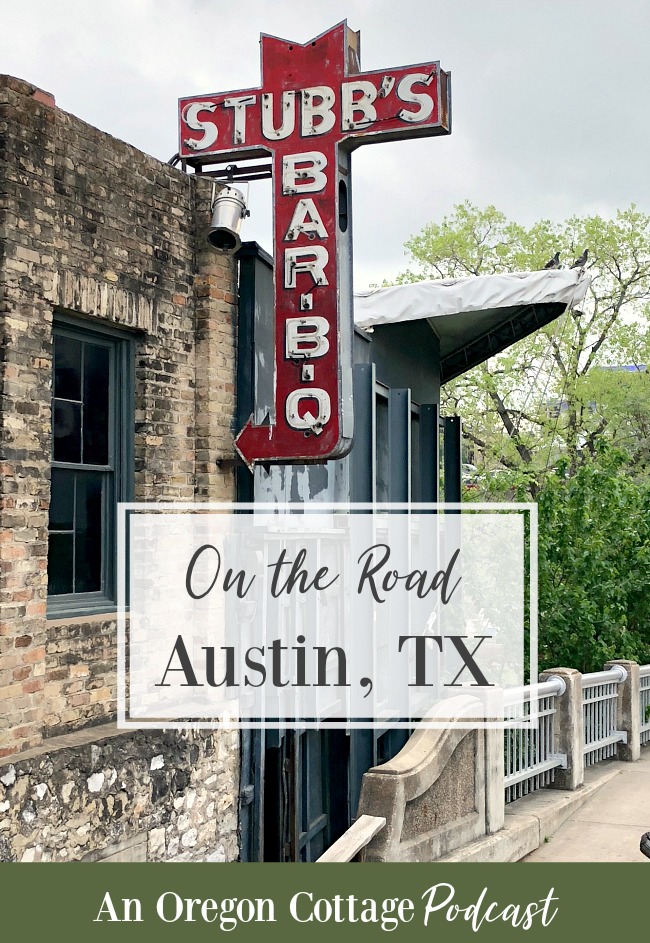 You can download this episode from Apple Podcasts, Google Play, Stitcher, and TuneIn Radio – or listen to it below right on your computer! Then use this page to check out any links, notes, or photos we talked about in the episode. Note: If you’re reading in a feed reader, you might have to click through to the post to see the player. 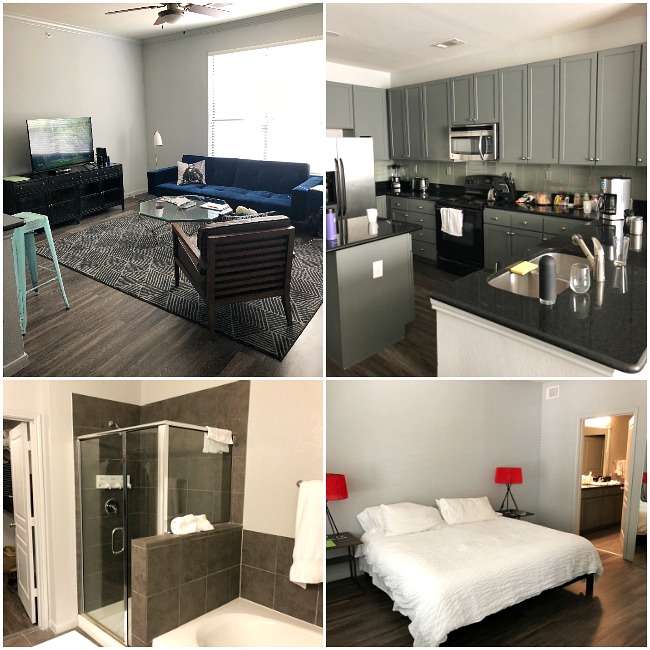 Staying in the spacious apartment at The Guild Red River was just a few dollars more than a mid-priced hotel in the downtown area (and actually cheaper than the Airbnb's that were available nearby). It was so worth the bit of extra money for the week we stayed.

There are other locations of Guild properties - they are now in Dallas and Miami as well as other Austin locations. We loved this concept! 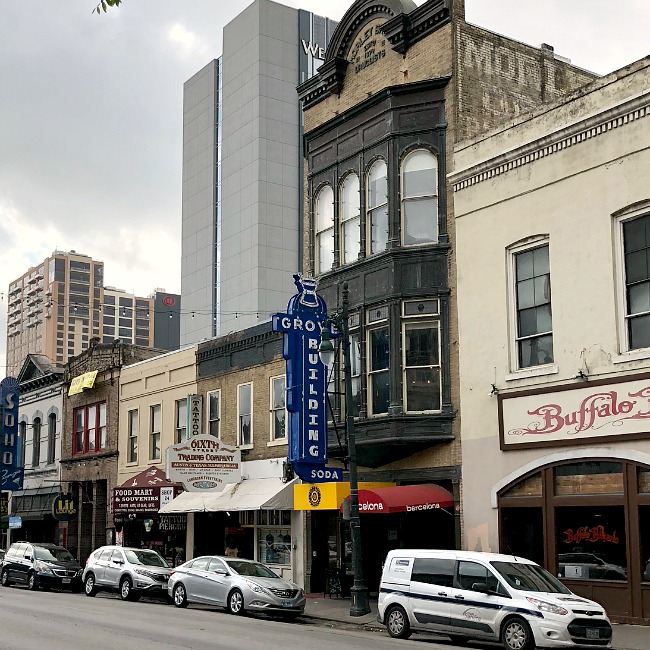 Austin is a mix of old west storefronts and homes made from native white limestone and newer high rise buildings. The picture above is from 6th Street, the heart of the Red River Cultural District, where you'll find more bars than you can count with plenty of tattoo parlors and restaurants thrown in. It's crowded with lots of live music on weekend nights, but pretty quite the rest of the week. 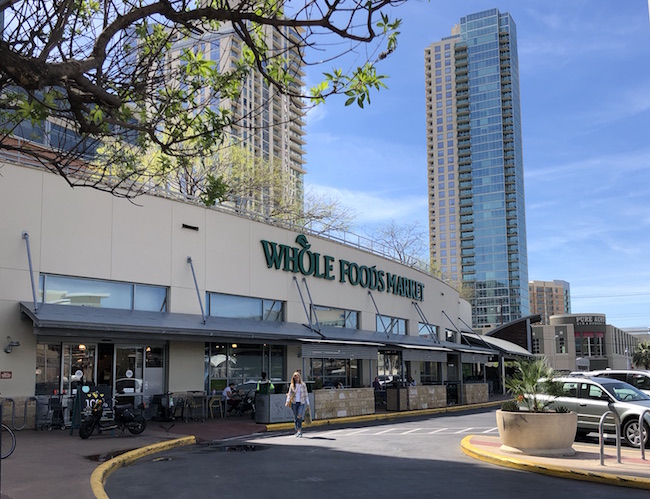 Here's the flagship Whole Foods Market in downtown that we hiked to since it was the closest store with fresh produce. We bought cereal, milk, vegetables, hummus, crackers, chips, salsa, cheese and fruit. Because we stayed in an apartment, we were able to save money by making our breakfasts and lunches - and we even made nachos one night for dinner after having gotten salads for lunch.

There are two things I want to add in the notes that we didn't get a chance to talk about when we were recording. 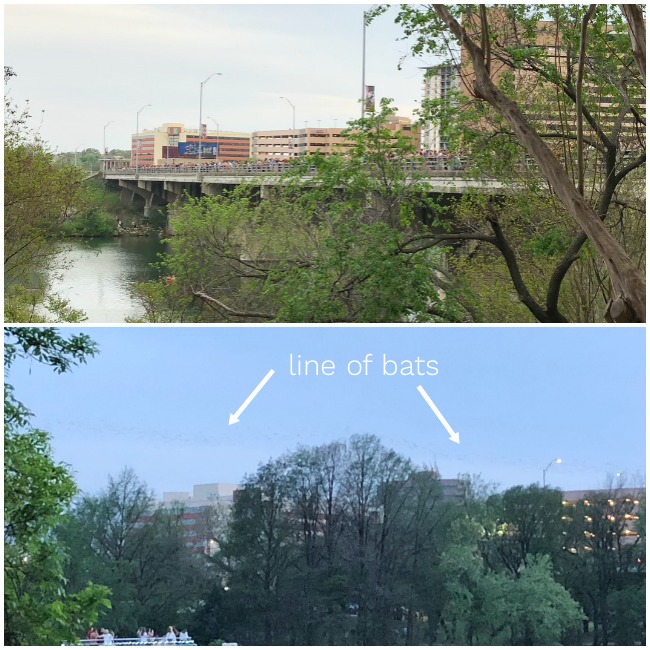 The first is the Austin bats. Apparently, it's the largest urban bat colony in the US, and at the height when there are babies (mid-summer), it can reach more than a million bats. That's a lot. They live under a bridge over the river in downtown from March through sometime in the fall before migrating.

We actually didn't go to the river to watch them, but were walking the path and saw the crowd, so hung out a bit to see. The top photo shows the crowds lining the bridge - they are there more than an hour before the bats fly out at dusk. An hour! For bats.

The lower photo above shows what my phone camera could get of the bats - there weren't that many in March, so it's just a little gray line - hopefully the people who paid money to be on the river boats could see them better. 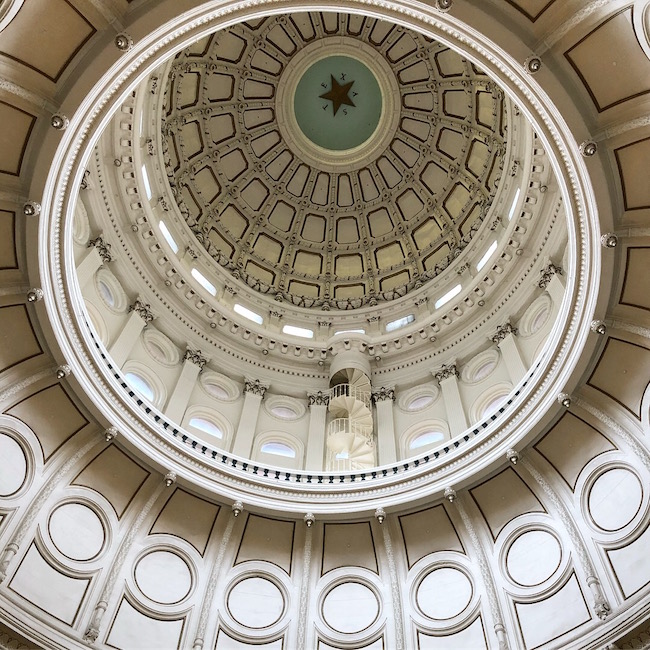 The second thing was touring the Texas State Capitol that was just a few blocks from where we stayed in downtown Austin. The grounds are 22 acres that hold a lot of walking paths and statues that are amazing. The building itself is spectacular and the highlight is the dome, pictured above.

The woodwork and attention to detail - wow. Such craftsmanship. We visited the senate and house rooms, too, which are still in use. Can you imagine going to work everyday surrounded by such history? 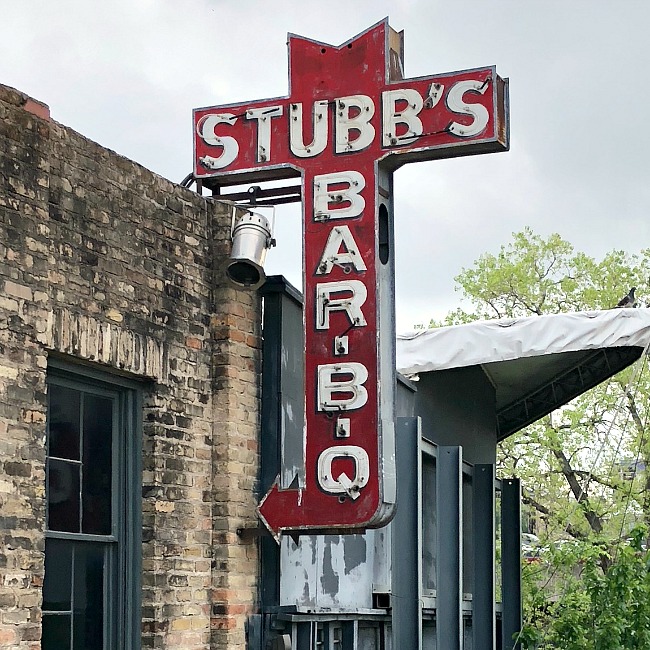 And one more that didn't make it into the podcast, but is worth mentioning:

Texas Chili Parlor - a real dive-bar kind of atmosphere, but with terrific Texas-style chili (no beans) with three heat levels and great prices.

This is Really Cool!

Brian's - Super lightweight, Delsey spinner suitcase from Costco. Costco doesn't sell this anymore, but this is a similar carryon made by the same company.
Jami's - Anker PowerCore+ mini Lipstick-Sized Portable Charger - perfect for traveling! There were many times we were on small airplanes that didn't have chargers, so this comes in handy every time I travel.

Spring clean your garden with this handy checklist - just one of the many free downloads available as a newsletter subscriber VIP - CLICK HERE to join! (Or click the image below) 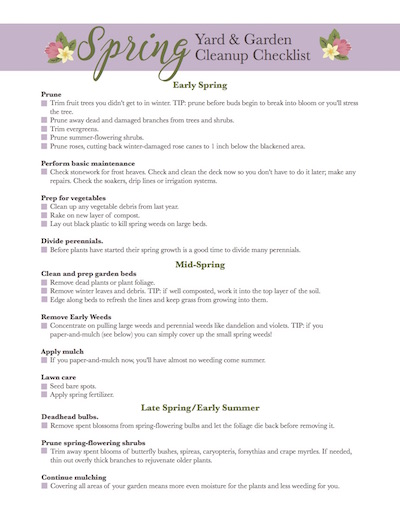 Thanks for listening! If you like this podcast, you can really help us out by telling your friends, subscribing on iTunes, and leaving us a review – that’s how other’s will find us too.

And if you'd like to ask a question or leave an idea for future podcasts you can call (541) 658-0215 to leave a voicemail and we'll talk about it on the air!

Disclosure: affiliate links in this post will earn commission based on sales, but it doesn't change your price. Click here to read my full disclaimer and advertising disclosure.