See parts one and two of this series here.

The very first week we owned our house, we farmed the kids out to relatives, lived in our little trailer in the driveway and painted the entire inside of the house (our possessions were still in storage after selling our city house). In part two, I showed the before and after pictures from the main rooms and hallway, and today I'm showcasing the bedrooms. 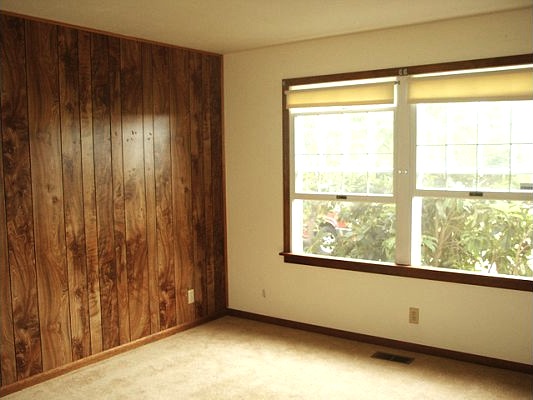 This first bedroom down our hallway became our son's room. Like the rest of the house, this room continued the brown-on-brown theme with one difference: the lovely 70s-era paneled wall. Apparently, 1982 wasn't far enough away to escape this. 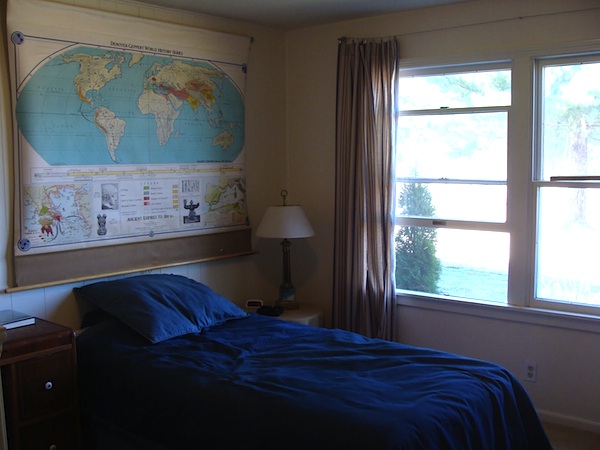 Luckily, like the rest of the house, it was nothing that paint couldn't cover. We painted the paneling, all the trim and doors in this room as well as changing the light fixture and door knob. Other than that, that's all we had to do in this room (meaning there was no wallpaper to peel...I've learned that 70s paneling is preferable any day to 80s wallpaper!).

Decorating notes: the large vintage school map was found on ebay (and I love it), the curtains are from Target, and I made the denim duvet cover. (2010 update: go here to see the Extreme Surprise Makeover we gave our son's room) 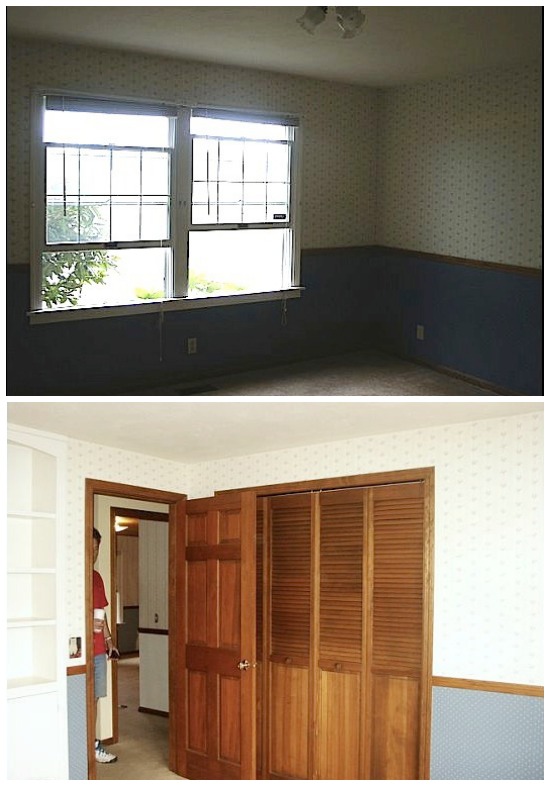 The next bedroom down the hall became our daughter's room. Curiously, this room had a built-in cupboard which you can see in the far left of the bottom photo that seems like it was salvaged from an old house. It was the only wooden thing in the house that was painted white - like the rest of the house, all the other woodwork in this room was stained walnut.

This room, though, had one more thing that the first bedroom did not - a chair rail molding that separated two different patterns of wallpaper. So while Brian sprayed the rest of the house with white paint, I did this: 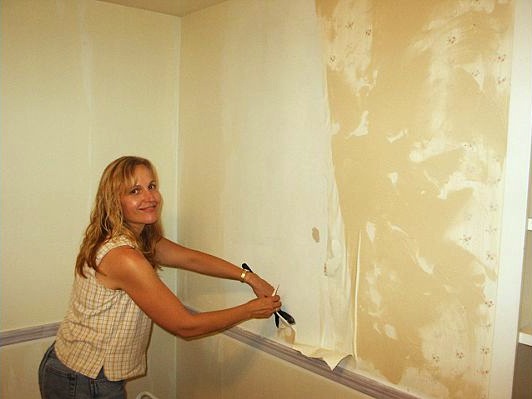 Now, I'd had my share of removing wallpaper, both for friends and in our old house, but this house had two bedrooms with all the walls covered in cutesy-country 1980s printed paper (this room and the master) and I wasn't looking forward to removing it. Then I discovered that the paper was applied over bare drywall, before any of the moldings were attached - and wallpaper sticks really well to bare drywall.

You know that thing that happens when you get the paper wet and can peel much of it off in large pieces? Yeah...that never happened. Like ever. It was all little pieces...one after another. After many hours (actually, days), lots of different techniques (solutions, tools, paste, etc.), and sweet people who came to help me peel, I came to one conclusion:

I will never put wallpaper up in any house I live in for the rest of my life. Promise. 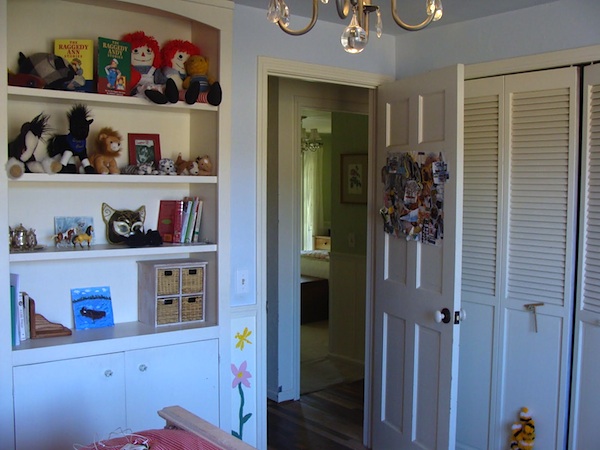 I eventually did get the paper removed (actually, I think we might've painted over some stubborn pieces that we textured over...) and we were able to paint this room with white trim and doors to match the rest of the house. Doesn't it look SO much better? 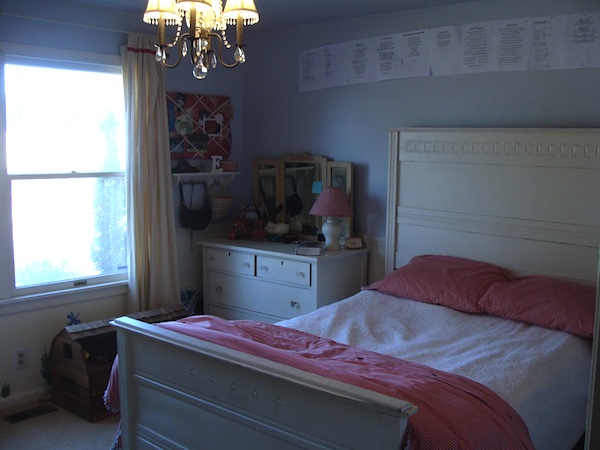 We painted the lower walls  a light yellow with blue upper walls and ceiling (which I sponged clouds onto), as our daughter requested.
She also picked out a chandelier for her light fixture (found on clearance at a local store) and last year she painted flowers along the bottom wall.

Decorating note: the vintage bedroom set came from Brian's aunt & uncle's barn - complete with horse bites - that we paid $50 for and glued back together before painting; I made the duvet from sheets to match the pillow cases; the curtains are from Target which I added ribbon borders to. (go here to see the brown paper floor we put down in her room - it's awesome!) 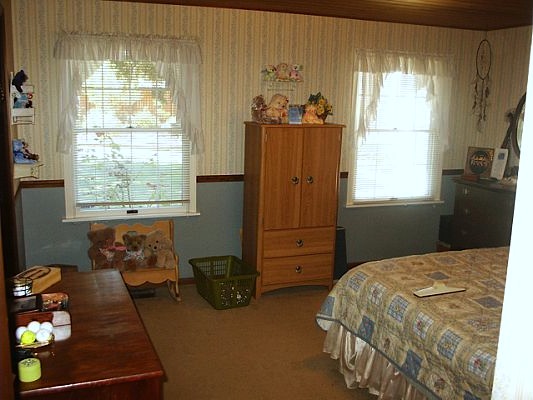 Before we could do anything with our bedroom, I needed to do more peeling of wallpaper. I think there were probably tears shed. I'm serious about that promise. 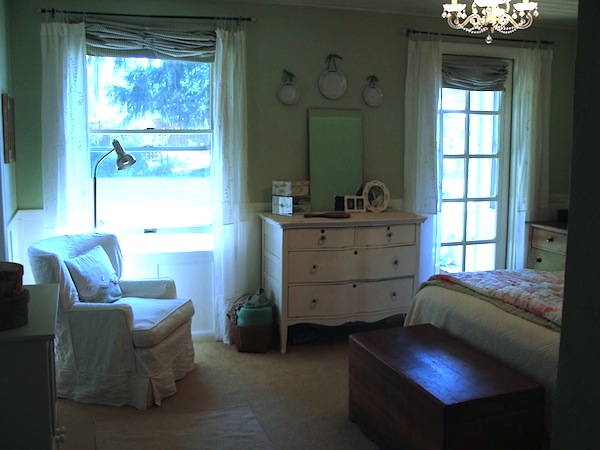 After the wallpaper came down, we painted the wood ceiling and the portion below the chair rail our standard white and upper walls a light sage green. We added the chandelier which we found at Lowes on clearance, probably because it had amber colored drops. I simply replaced them with some plastic ones I found at the craft store.

Decorating notes: I kept these sheers from our old house after adapting to fit these windows and bought new rods from Kmart. I made the roman shades from a green and cream ticking fabric. 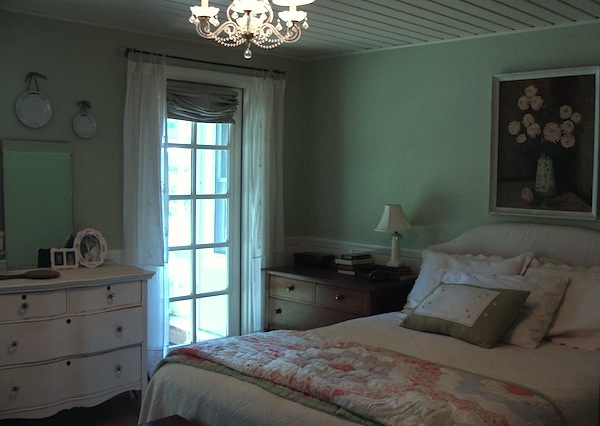 We had a French door installed in place of one of the windows by the builder who helped us with our garage remodel. I've always loved the idea of French doors in master bedrooms and since we were adding them to other areas of the house, I pushed for this door. I've found, though, that we don't really use it, so while I think the door is nice, it was kind of an expensive nice and it is the one thing I wish I hadn't paid to have done. But Brian really likes it, so that helps a little. 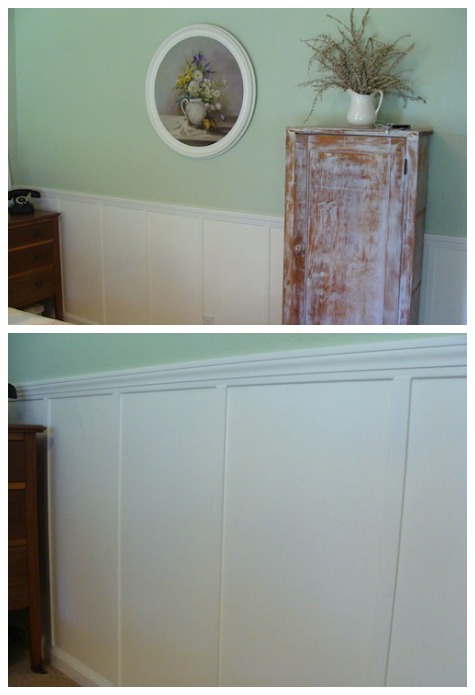 This is the wall to the right of the bed. I wanted to be sure and share the easy way we created a board-and-batten paneling look for the lower walls:

To make it look perfect, we could've removed the chair rail and replaced it with a 1 x 3 board. But I wasn't removing anything I didn't have to after all that wallpaper. And caulk covers a multitude of sins.