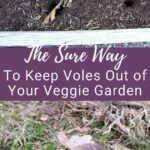 Wondering if you have voles (also known as meadow mice or sometimes field mice) and what to do about them? Or know you have them and need advice on how to control them in your garden? Here's our experience and how we saved the vegetables in our raised bed garden.

We noticed holes in the yard of our previous home shortly after moving in but really didn't think about it much. I knew they were from voles (sometimes referred to as field mice) but they were small and insignificant and we didn't worry about them.

Until they started attacking my vegetable garden with a vengeance about four years after moving in.

We'd see a hole now and then, but that was about it until I started seeing bites out of carrots one July. Just a few weeks later this advanced to the whole carrot disappearing leaving me only the wilted tops.

It was like those Winnie The Pooh cartoons where Rabbit pulls the carrot top and there's nothing underneath.

I will never look at those cartoons the same again.

By the time I harvested potatoes that were riddled with bites, I was discouraged and frustrated.

And started looking for possible solutions.

Voles are small rodents that live primarily outside and feed on vegetation. While sometimes called meadow mice or field mice, they are distinguishable from mice in that they have shorter tails as well as smaller eyes and ears. Their nose also seems more pointed to me.

Besides eating root vegetables, voles can also do much more damage to yards including eating flower bulbs, gnawing tree bark, crippling plant roots, nibbling stems, and creating holes and pathways in the lawn.

How do you get rid of voles?

I tried a number of things that some people have had success with in discouraging vole activity:

None of these things worked in our vegetable garden.

The Vole-Proofing Method That Worked for Our Garden

Since the raised beds held most of our food, we decided to take a kind of drastic measure that would stop them right away and hopefully for good in the beds.

We removed all the soil and lined the raised beds with the cloth and it worked! We had no more voles in the beds and were able to harvest everything we planted.

Here's a video we made documenting this vole-proofing method for the raised beds:

How to Vole-Proof Raised Beds (existing or new)

BIG NOTE: Unless your beds are very tall, you won't be able to use long stakes anymore in the bed - they will not go through the mesh.

We had to stake our tomatoes from the outside of the beds, using "t" fence posts in the paths next to the bed. Just another lovely irritation from the voles...

While this method worked for the tall raised beds, we weren't able to use it on our larger, mounded beds since there were no sides to attach it to.

I basically had to stop growing potatoes in those beds, since I was just feeding our ever-growing population of voles.

We've since moved into an old farmhouse and the property has not only voles, but also gophers, moles, deer, and ground squirrels that are all wanting our produce or damaging our property.

We haven't found a method for dealing with the huge number of voles in the lawn/pasture (seen in the photo above), but we can keep them out of our veggie beds using the cloth and we've found a few ways to deal with the other animals:

Gopher Methods that DON'T work. A video of the methods we've tried for the "gopher city" we inherited (that's not a joke - it's an established area full of rocks and boulders that many gophers have lived in for a long time).

The Gopher Method That DID work for us. Although it's a continual, time-sucking, activity that will never end for this established property...

We built a tall fence to keep the deer out of the majority of our vegetable garden which you can see here in this garden tour.

I added fencing along the bottom of the tall deer fence, dug into the ground a bit to deter the ground squirrels (though they do climb of course). What's really worked with them is live trapping though. We keep a trap in the vegetable garden baited with sunflower seeds.

We still haven't found the best method for moles and while they don't eat anything, they sure make a mess out of anything pretty I've planned. No gravel paths for me, it seems - I have to plan for them to come up and use something that is a barrier (concrete) or can be easily fixed (wood chips).

If you have any suggestions on dealing with these types of animals that have worked for you we'd LOVE to hear it!! Obviously, we're not done with the problem...

This article has been updated - it was originally published in April 2010.

Disclosure: affiliate links in this article will earn commission based on sales, but it doesn't change your price. Click here to read our full disclaimer and advertising disclosure.