Things are finally looking like a vegetable garden here at the end of June- it took a while to get going after the second wettest spring in the last 100 years.

So for those of you who've been basking in summer-like weather for a few months, you'll have to forgive the tiny corn and beans. I'm just happy they're in the ground and coming up.

On the bright side, I've only had to start watering this last week! 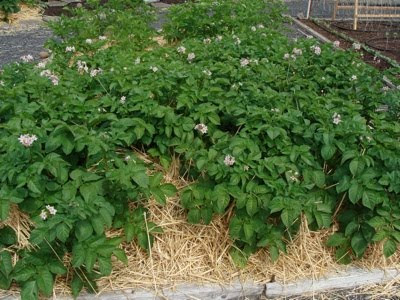 After slightly modifying the way I planted potatoes to deter the slugs, they have been growing great guns. I've hilled-up with the straw, though I waited this year until they were about a foot tall- baiting for slugs the whole time (using a "garden safe" type).

I'm not showing the other side of the bed, though, where even the bait didn't stop the slugs enough from stunting the growth of the later-sprouting spuds. They are only a couple inches tall and I don't think are going to grow more for me.

Win some, lose some. 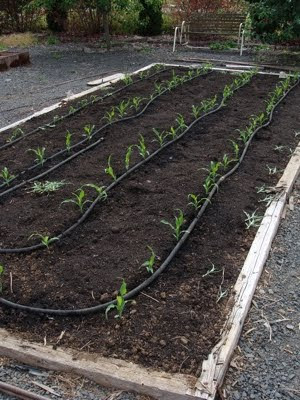 The corn is up and I thinned the rows today. I know it seems wasteful, but the year I didn't plant the seeds as thick, I had huge gaps where either the birds got the seeds or they didn't germinate. This year, especially, I didn't want to reseed later, since they were going in so late anyway.

Oh, and see the corner in the foreground? That is the corner where the pitchfork got the vole.

Maybe I should make a plaque to commemorate it or something. 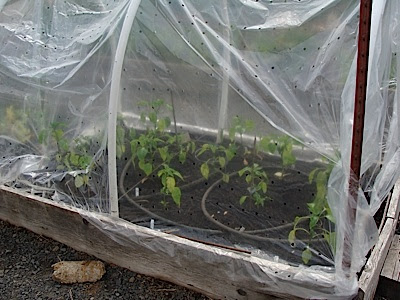 The peppers are doing OK in their hoop house (I've used a special perforated plastic that doesn't have to be removed when the weather gets warm). These are plants I started from seed (and they made it!), and they were in the pots too long as I tried to harden them off with our yucky weather, so they are just starting to acclimate to the new environment.

Looking closer (which you can't, 'cause I didn't get a picture...) you can see all the new growth they are putting out, so in a few weeks they will look healthier. 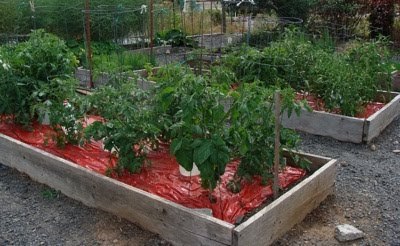 The tomatoes, on the other hand, have been liberated from their covers. They are so lush that they were stretching the covers, so it was time for them to come off. This is a good illustration of the difference simple row covers can make during a wet, cold spring. I've actually got flowers and a few small, green fruit.

It's this first bed that was hit so hard by the slugs, and of the four plants you can see in the front, the middle two were some of the original seedlings that made it through after I baited for slugs and the end plants are replacements for plants that didn't. The replacements are bigger, but again, I'm just happy not all of them were goners. 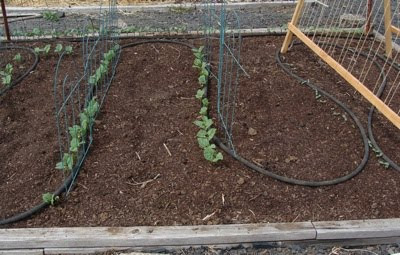 The beans and cucumbers were the last things to get planted- just two weeks ago - I'm so thrilled to see the little leaves coming up! 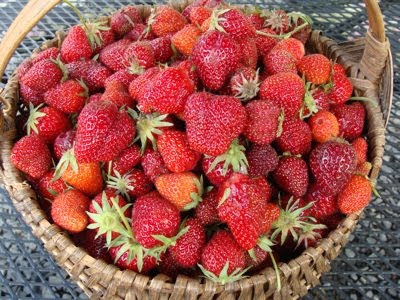 And we're getting baskets of the most luscious tasting strawberries! I've already made jam, frozen whole ones for smoothies, eaten them plain and with whipped cream, and am looking forward to strawberry shortcakes in the next few days.

How are your gardens growing?