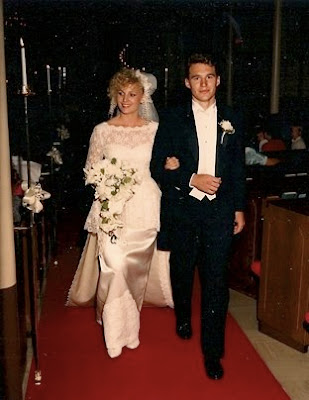 We got married. I felt so mature then but when I look at these photos now we just seem so…young. We were in our mid-twenties, though, a perfectly respectable age to be married.

We were just finishing college- Brian had graduated the spring before and I was waiting to do my student teaching and finish my thesis for my graduate degree – so things had to be pretty frugal. Our parents helped where they could with the wedding costs, but we had to pay for some things or find inexpensive alternatives.

Three guesses which we chose?

The beautiful church was free because it was our home church. I re-worked my mother’s wedding dress, adding the long skirt, train, and embellishments. My maid-of-honor’s stepmother did the sewing for me. There were tons of candelabras available at the church and we just added the candles and some bows.

My one regret in the name of *cough* cheapness? Fake flowers. I can tell in the photos and I just don’t care for fake things anymore (I wasn’t a gardener, then, as you can probably guess). 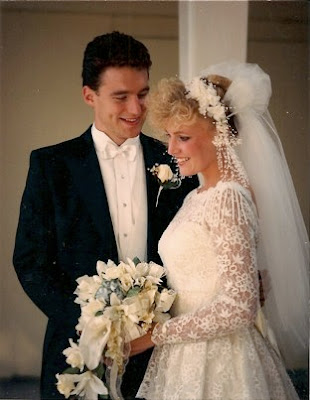 Isn’t Brian something? So handsome- I felt like I was marrying a model. Hard to believe his hair was ever this dark- he’s started getting gray just a few years later.

I made the veil based on a Brides Magazine picture. It was all the rage then to have the sprays hanging down, but my daughter just laughs at it now.

She laughs at my big hair pouf, too. But it was the 1980’s and big hair was the ONLY way to go. I think it’s coming back in style now, actually.

The peplum-style top paired with a straight skirt was very popular then as well. All the bridesmaids dresses were in this same style, like my gown, but in a beautiful iridescent emerald green. I’m really grateful to the stepmom of my best friend (the same lady who sewed my dress) who sewed ALL the bridesmaids dresses which allowed us to purchase the material so that they didn’t have to pay for dresses they wouldn’t wear again (I wasn’t fooling myself there…).

And guess what? The peplum style is coming back again too- I just saw it in a magazine. Sheesh, everything comes around…. 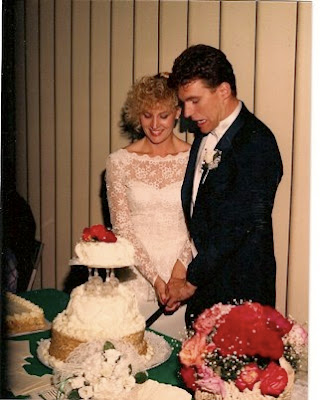 This is not the best picture *a-hem* but I wanted to use it to tell a little story. All my family- aunts, uncles, grandmas, etc.- chipped in and brought food for the reception. Love them.

But my one splurge was a cake that I fell in love with at another friend’s wedding. A carrot cake with real cream cheese frosting. Scrumptious and REAL in a time of whipped shortening frostings. I scrimped everywhere else to have that cake.

But the cake wasn’t at the reception when we arrived. It wasn’t there 45 minutes later, either. We finally called and found it was “on it’s way.” Meantime, the photographer, who was a friend, was hanging around… we thought to be a part of the reception. We found out when we got the bill that he was there all that time in a “professional mode.”

The cake arrived finally an hour late. Which is a big deal when the wedding started at 7:00pm. By 9:00-ish, the time it arrived, some people had already had to leave…without tasting this wonderful cake I had to have.

The piece de resistance, however, came when the cake deliverer (is this a title?) put the tiers together and, because of the heat (believe it or not, it was about 90 degrees here in Oregon 22 years ago today…) and the extra time in the van, we all watched as the layers started to slide apart. She then took her hands (which had been where in the last few hours?), placed them on the sides of the frosted cake, and squished it back in place.

I kid you not. I was slightly horrified, but at this point just wanted to get on with the show. See the strategically placed bouquet at the bottom and the odd red flower (at my green and white wedding) on the top? Yep, hiding the damage.

So the bad news is we’ve got this really expensive picture, thanks to our long-suffering (?) photographer, but the good news is we called to complain about the cake and to my shock they reimbursed us the entire cost of the cake!! So I got to have my cake (albeit a little lopsided), eat it, and not pay for it.

But the best part of all?

He has made me laugh almost everyday for the last 22 years, he always sees the good in people and situations, he challenges me and makes me a better person. I’m so grateful for his spiritual leadership, his faithfulness, and that he’s not afraid to show he loves me every day all these years later.