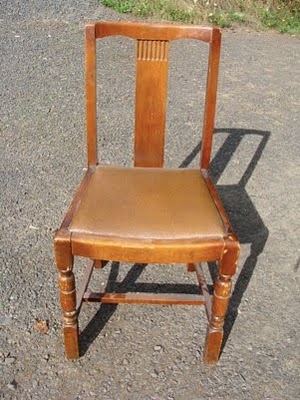 Remember these chairs I found on Craigslist for $5 each last October? Um, I know it's been awhile, but rack your brain and maybe you'll remember. We needed sturdy chairs and I wasn't finding any I liked in my price range, so we bought these cheap ones to give us (and our guests!) something secure to sit on.

I finally finished them last week.

Such is the life of a DIY-er - weeks and even months (dare I say years?) go by before a project is completed. Where does all the time go, anyway? 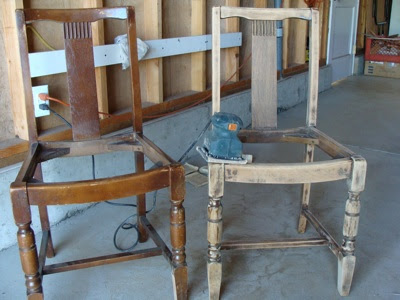 The finish was coming off on some of them, but since I was painting them, I didn't need to strip them completely, only sand as needed.

The chairs are dated 1960, but they have such a 50's faux-craftsman vibe to me. Wanna know something we found out from fixing the feet (more on that later) and sanding? These are solid oak - they were just treated to a fake maple finish in 1960 (which I found to be pretty ugly, but I know from my grandma's furniture that it was highly sought after then). Oh what we do in the name of style.

And when the oak showed through after sanding, they really screamed "craftsman" to me. Alas, I wasn't willing to invest the time to totally strip and refinish them. I didn't like them that much. 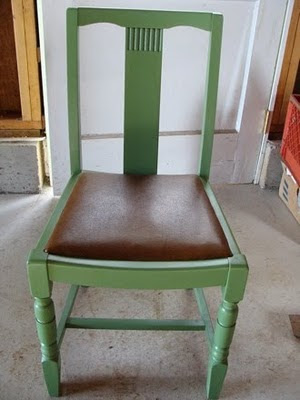 Those of you who've been racking your brains may recall this green chair fail I tried in February. I learned that if you're not in love with the shape of something, don't paint it a color that makes it stand out. 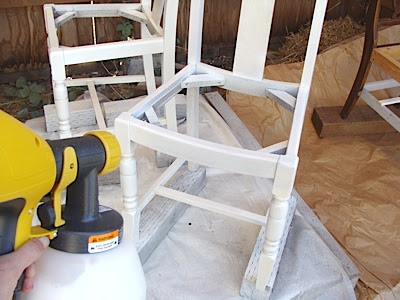 So, with four chairs to be painted, including rails, shaped legs and such, you can imagine why I put it off. Spraying, I decided was the way to go. But I found that one $5 can only gave two coats (and I needed three).

Enter my new time saving Wagner Control Spray Double Duty Paint Sprayer. Brian had always poo-pooed my wish to get a small sprayer for all the painting projects we have (louvered bi-fold doors, anyone?), saying they never worked.

Gee, can you guess who does all the painting around here?

But I did some research on Amazon, which I shared in this post about painting with a small sprayer. Suffice it to say that I set up a spray booth in an old shed and went to town.

In two days, all the chairs plus a few other items were coated with three coats of creamy white paint. Oh happy day! 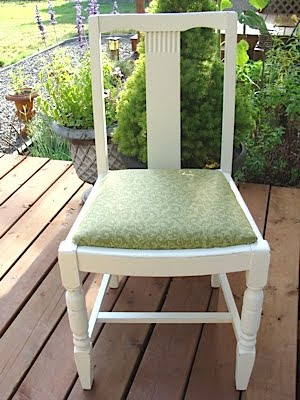 And the after? I LOVE them- even more than I thought I would.

I was all set to cover the seats with a black and cream fabric when I found this green pattern at the fabric store. On a whim I bought it and I found that I really liked how the green with the cream looked so bright and refreshing. I'll be posting about how I covered these cushions soon.

Do you notice the tapered front legs? 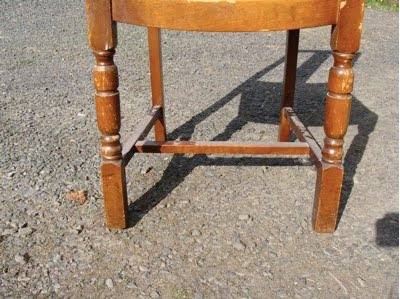 These are the blocky legs they had when we bought them. I almost didn't buy them because of these, actually, but then I thought we could somehow cut them to slim them down a bit since they were being painted anyway.

It was a little harder than I thought, but luckily my stepdad has a wood shop and he was able to help us through the process on his equipment. 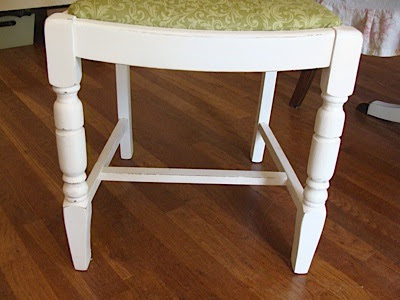 Once the chairs were painted, the legs look so much nicer without the heavy blocks on the bottoms. 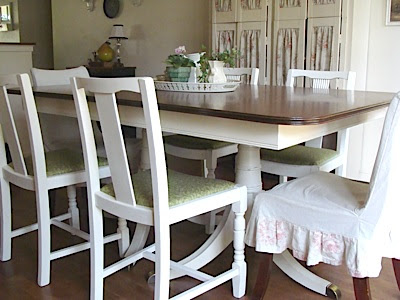 Don't they look fabulous around the redone Craigslist table? Now I like them so much, they might not be my "stop-gap" chairs after all, but my "forever" chairs.

Well, until something better comes along that's a deal I can't pass up.

What do you think? Would you keep looking for chairs?

This is linked to Show and Tell Friday and Furniture Feature Friday.