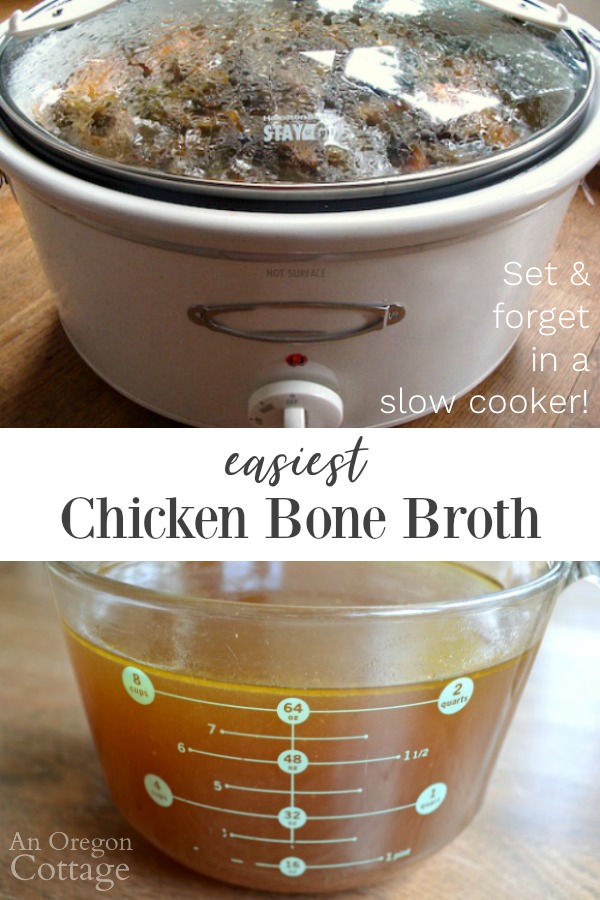 In the very first year of AOC I wrote about making chicken broth in a big soup pot on the stove. I loved how easy it was and how it's a great way to use things we'd normally throw away (bones and vegetable scraps) to make a super nourishing meat stock. Plus, having a pot of this simmering on the stove is so comforting in the winter.

To make sure I always had some on hand, I made big batches to freeze and use for making soups and in place of water to make rice (ups the nutrient value and the flavor), as well as for recipes like curry and risotto. I also discovered that homemade stock gave even deeper flavor to sauces and gravies.

And while sometimes I do still like to put a great big stock pot on the stove to use up a bunch of bones I've had in the freezer, most of the time now I use an even easier method to make an amazing bone broth: the slow cooker!

I actually discovered the convenience of using a crock pot during the summer when the idea of a huge pot of broth simmering away on the stove for hours (the longer it cooks, the more flavor it has) wasn't so appealing. We weren't eating soups, but I still wanted broth for rice, curries, and other recipes that call for stock.

Plus, I simply don't want to waste the precious chicken bones. Or actually any bones! This is the same way you make beef broth, turkey broth or even pork broth - just change out the bones for whatever you have and proceed! 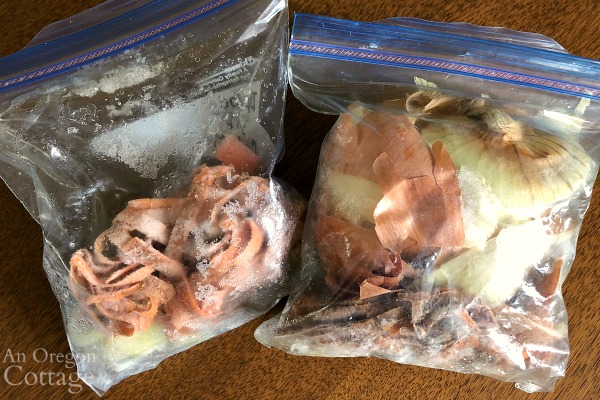 There are two methods - both crazy easy - to go about making slow cooker chicken broth and both of them use the vegetable scraps you've been keeping in baggies in the freezer (Don't have any? Start asap - just keep the empty bags in the door of the freezer for easy adding any time you're prepping onions, carrots, and celery...):

1) Freeze chicken bones to make broth later - I do this a lot when I'm cutting up a chicken, saving the backs until there's enough for a pot.

2) Cook a whole chicken like this, cut the meat off the bones and freeze to make any recipe that calls for cooked chicken (this is one of my key menu tips - then you can add any of these quick recipes using cooked chicken to your menus!).

And if you want to be super efficient, throw a chicken in the slow cooker right when you get home from shopping! You can season it like this slow cooked spiced rotisserie chicken to eat some for dinner or just season it with a bit of salt and pepper, letting it cook on High for about 3 hours before removing the chicken from the bones and packaging the meat up for the freezer. 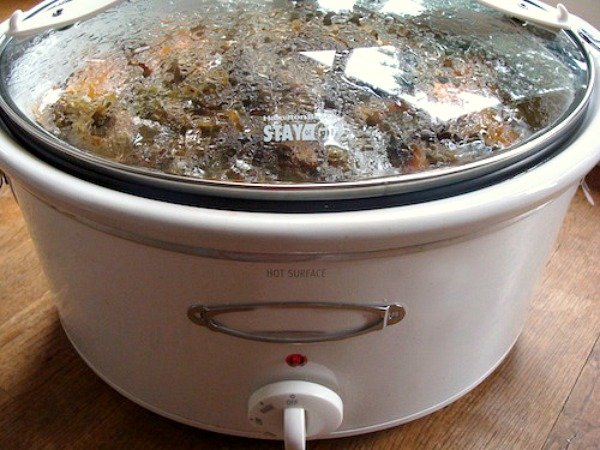 Either way, here are the steps to make chicken broth easily in the slow cooker:

Can I use any vegetables to make chicken broth?

Technically, yes, but some will impart bitter or strong flavors so we typically stay away from them, especially when we want the most flexible broth for using in recipes.

The best vegetables to use in chicken stock are:

Other vegetables you can use if you don't mind the flavor: 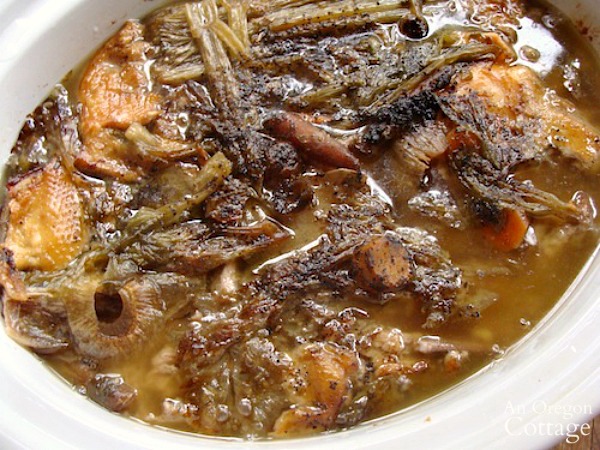 If you've left it overnight, in the morning the deepest, most flavorful and nutrient-dense chicken broth awaits you in the cooker. And the house smells amazing!

Depending on when you started the broth the day before, you can take care of it right away or wait a few more hours to get closer to the 24 hour mark. I usually aim for 17 to 20 hours, which if I started it the evening before is early afternoon of the next day. 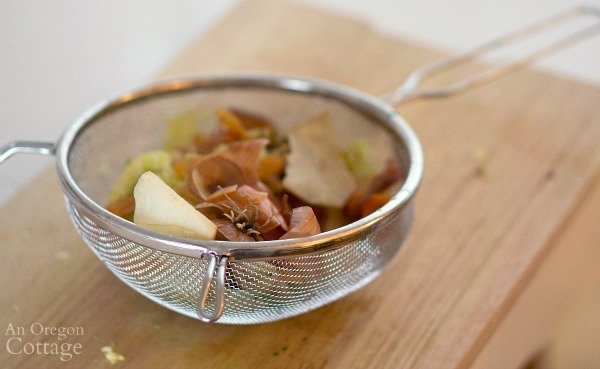 Now it's a simply matter of straining the broth into a large pourable container (an 8-cup glass measure or batter bowl with spout works) and then portioning it into glass canning jars or other freezer containers.

Cool the broth before attaching lids and store in the fridge for a week or the freezer for up to a year. 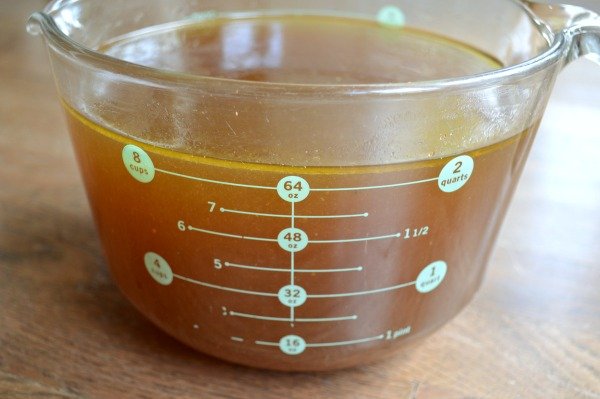 Obviously, you can do this in the morning and let the broth cook all day as well, going for a 12 hour cooking window. I simply find it easiest to let it cook through the night after cooking a chicken in the afternoon.

The slow cooker has made it possible for me to have both cooked meat and broth ready for recipes - all without heating up the kitchen (well, not too much - and mostly at night) and with a minimum of work. If you made nothing else with a slow cooker but cooked chicken and broth, it would be well worth the investment!

UPDATE: I now also will make bone broth in my Instant Pot! It still takes a couple hours, but it's a LOT less time than 12 to 24 (though the slow cooker is still the more "set it and forget it" appliance for me, so I do both). You follow all the same steps, but making sure the water in the Instant Pot goes just to the MAX line and not over. Cook on High pressure for 1 hour and let release naturally for 30 minutes. With the 30 minutes to come to pressure, it's about a 2 hour cooking time. I've added these directions to the recipe below.

And the fact that this delicious broth is made from throw-away items? Amazing!

Have you used your slow cooker to make broth? If so, what is your favorite way to use the broth? 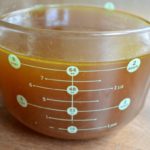 *Or use 3-4 pounds bones from any animal: beef, turkey, or pork to make the corresponding broth. **Technically this is optional, too, but it's almost imperative to help draw out the gelatin and other nutrients from the bones, so I'm encouraging you to always use it. ***I always leave skin in, even if I skim off the fat later, since it adds a lot of flavor - you can remove it if you prefer. Also: any giblets from a whole chicken or turkey often provide really strong flavors, so I may add the neck and gizzard, but not the liver - it's up to you.

This recipe has been updated in February 2019.