I'm going to be posting the recipe for the Slow-Cooked Chicken with Artichokes and Dried Tomatoes (part of last week's menu) tomorrow. Since it calls for chicken pieces and I had only a whole chicken, I thought I'd take the opportunity to share with you how I cut a chicken and maybe demystify it for any who haven't cut a whole chicken into pieces before.

I often have whole chickens in my freezer instead of cut-up pieces because it's usually cheaper. I can always find whole chickens for .59 to .79 a pound, but pieces are .99 to $1.29. There are reasons to buy just the pieces, but for many dishes a whole chicken works great. Normally I will just roast or slow cook the thing whole, but if a recipe calls for it to be cut up, I just sharpen my good knife and cut away, making for "cheep-cheep" chicken. (You didn't think I was going to ignore that one, did you?)

This one I kinda learned on my own, so I'm not going to say this is the way to cut a chicken, just the way I do it. I apologize to any butchers in advance.

WARNING: If you are a vegetarian because you don't like to look at or even think about meat, do not proceed any further. Pictures are used in this tutorial. Of. A. Dead. Animal.

Me? I've no problem with it- bring it on! 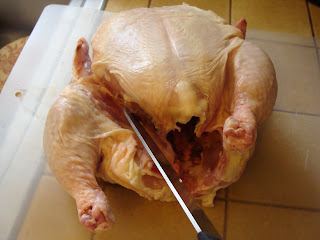 OK, there's this bird just sitting there- where to start? With the legs, that's where!

Take your sharp knife (it makes this go much easier, believe me) and slit through the skin between the leg and breast. You won't really be cutting through meat yet, just the skin so you can pull the leg further away from the breast. 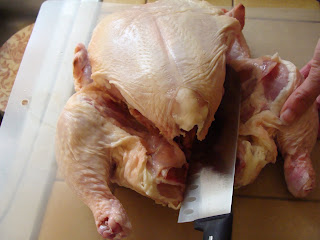 Repeat on the other side, using your hand to pull the leg down away from the breast. Make sure those legs are touching the cutting surface by pushing them down. There's some thin meat you are cutting through at this point. 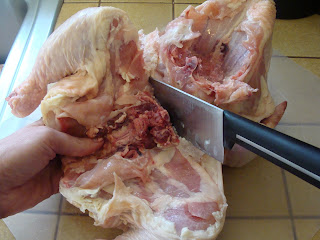 Now take the breast portion in one hand and leg portion in the other (it helps to put the chicken up on it's neck area for this- sorry, no picture 'cause I needed both hands to do it!), and pull back and down on the legs until you hear cracking and can see the natural area to cut (right about where the knife is in this picture).

Use your knife to cut the legs from the back. 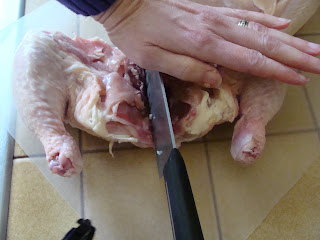 Now cut down the middle of the leg section. Don't be afraid to push down, you're going through bone here. Put some power in it!

Usually my cut is not right in the middle, though, because the knife goes to the side of the back bone so one thigh gets more bone than the other side. It doesn't matter, really. 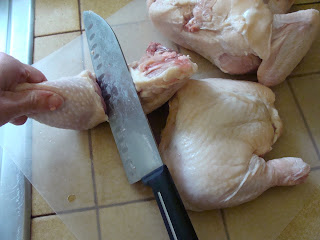 Now pull back the leg from the thigh, slicing a little with the knife to expose the joint in order to see where to cut. 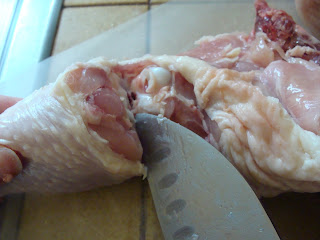 When you can see where the joint connects, cut through to separate the leg from the thigh. Repeat for the other leg. 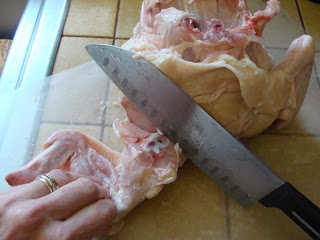 Then do the same thing for the wings, finding the joint where they connect with the breast and cutting through.

I always cut a little more breast meat with the wings than normal because they are pieces we eat and, well, the person who gets these should have a little meat on them, shouldn't they? 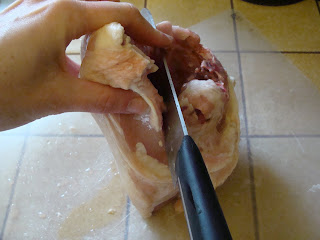 Pretty easy so far, right? Well, this is a little harder, but not by much.

I find it easiest to just stand the breast and back portion up again and use the knife to cut down through the two. I often get more ribs on the breast than I want, but again,who cares?

Just cut down as far as you can, I never try to go all the way through here- it just doesn't work for me very well. 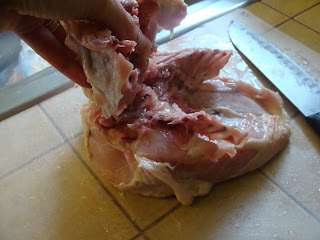 When I've gone as far as my knife allows, I pull the back from the breast, cracking the little bones holding them together and cutting anything I need to separate them. 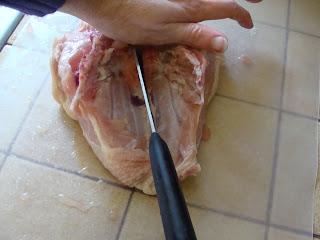 Now use that power and cut through the breast, bone-side up. Again, it's probably not going to be even- one breast will have more bone than the other. No big deal. 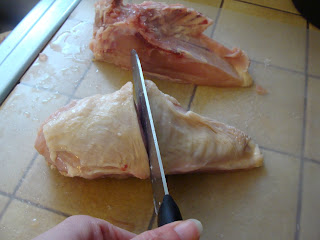 Lastly, I split the breasts in half again to make them into more manageable pieces. If you want to leave them whole, skip this step and be done early!

How much time did this take? Less than 10 minutes.

Not too much time, easy, and saved about a buck and a half- it's "cottage-worthy" for sure.

Now go forth and cut with confidence!

This is linked to Tasty Tuesdays.