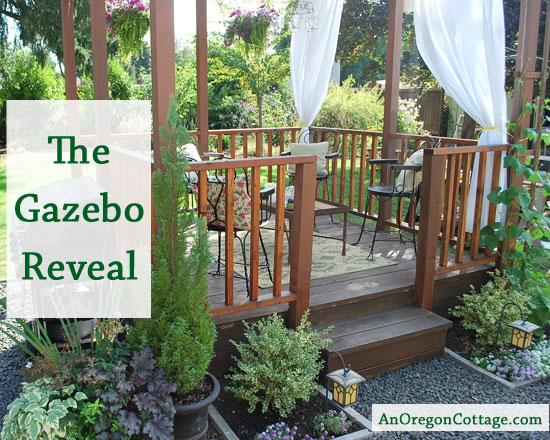 What happens when you take a weird structure in the corner of a deck and tear out the deck around it? Make it into a gazebo!

Which is exactly what we did when we tore out a huge, rotting deck... a year and a half ago. Well, we might (ok, often) take extra time for do-it-yourself projects, but they eventually do get done.

We decided to create a series of outdoor "rooms" - an entry deck, an herb garden, a gravel patio for dining, and a gazebo for relaxing - all in the footprint of the original deck.

Did I mention that it was huge?

How about a few "before and after" shots to see how far we've come: 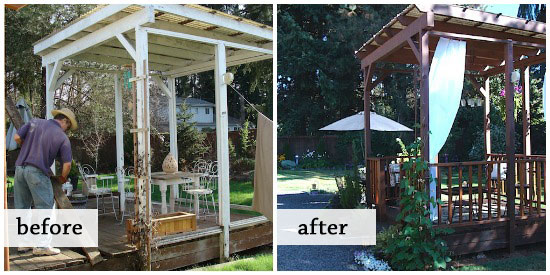 We started with a dirty, white, shed-roofed structure with a couple of rotting posts, but with a surprisingly in-tact floor. We now have an actual gazebo after adding rails and steps on two sides. We chose to paint it the color of wood to try and minimize the upkeep.

I have learned that white-painted things in Oregon look dirty and mossy after the very first winter. Which I know first hand from the white-picket fence, white pergola, and white arbor we had in our city bungalow. Two words: never again.

A bonus is the way it blends into the landscape - since it's not a beautiful structure, it's nice that it's simply part of the backyard as a whole. 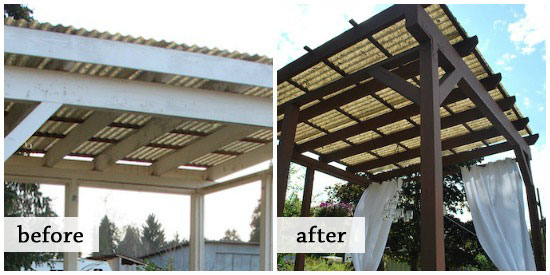 We tried to work with what we already had for simplicity's sake, so we kept the shed-roof, but we trimmed the lovely wiggle-board roofing and removed a facia board so that we could angle the 2x6's to help it look more like a pergola. 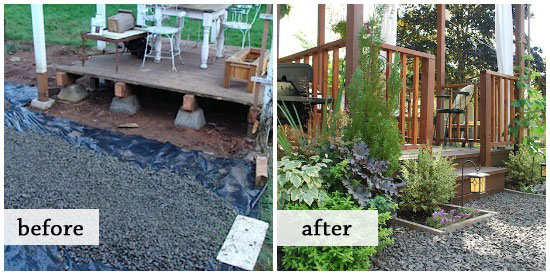 Two things took it from just a roof on posts to an actual gazebo: railings and entry stairs. We salvaged as much wood as possible from the deck and reused the good pieces to finish off the sides and flooring. 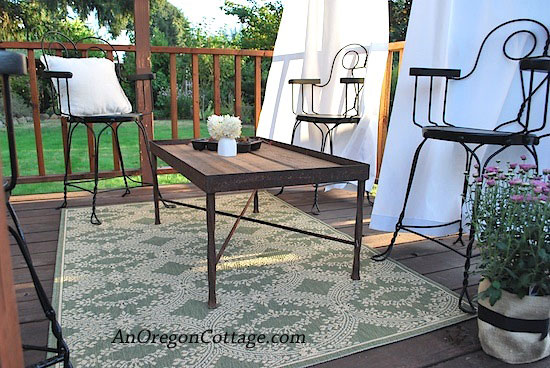 My gazebo inspiration photos usually showed curtains, which are fun, but they are also useful on this western wall of the gazebo to shield it and the dining area from the setting sun. We've been waiting awhile for these curtains - and it's been SO nice to be able to pull them when we need the shade.

I had heaps of curtain lining left over from when I made curtains for people years ago, so I simply sewed hems in the fabric. I still need to get chain to put in the hems to keep them from fluttering in the wind - I was happy to learn about this, as we get a lot of afternoon wind. Did you know this trick?

I had been saving things for quite awhile to decorate the gazebo with. The rug came from Ballards outdoor clearance sale last year and spent the winter in our garage. And these chairs have had many lives in our homes - they got a makeover in order to take their place in the gazebo.

Our friends were getting rid of the rusted coffee table because the glass had broken from the center a few years ago, but I loved the shape and rust, so I took it. 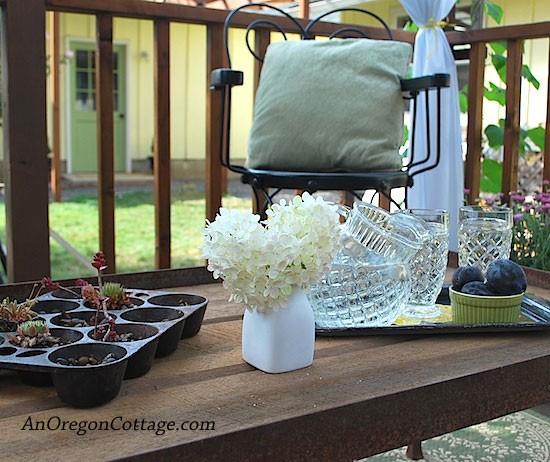 A few months ago our neighbor gave us a few pieces of old mahogany boards that had been stored in a barn. Brian cut them to fit the table and I LOVE how it turned out!

Who knows? It might even find it's way into the house in the future... 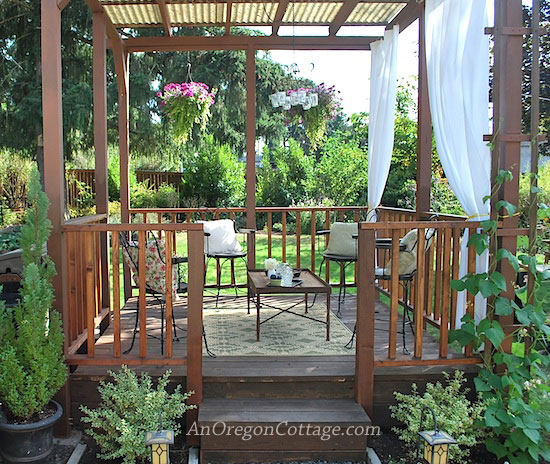 We sat in it the other night with friends and it made me sort of giddy after all the time I've spent thinking about it.

The best part of the gazebo makeover, though, has to be this view. This is what we look at everyday as we stand at our kitchen sink.

It's SO much nicer.

This is linked to Funky Junk Interiors, and Tatertots and Jello.