Our DIY backyard makeover remains one of the best improvements we ever did to our cottage! We use it during the warmer months and look at it everyday, so it was a great use of our time and money. I hope the before-and-afters inspire you to tackle some outdoor projects of your own - they really do give a great return and don't have to cost a lot. 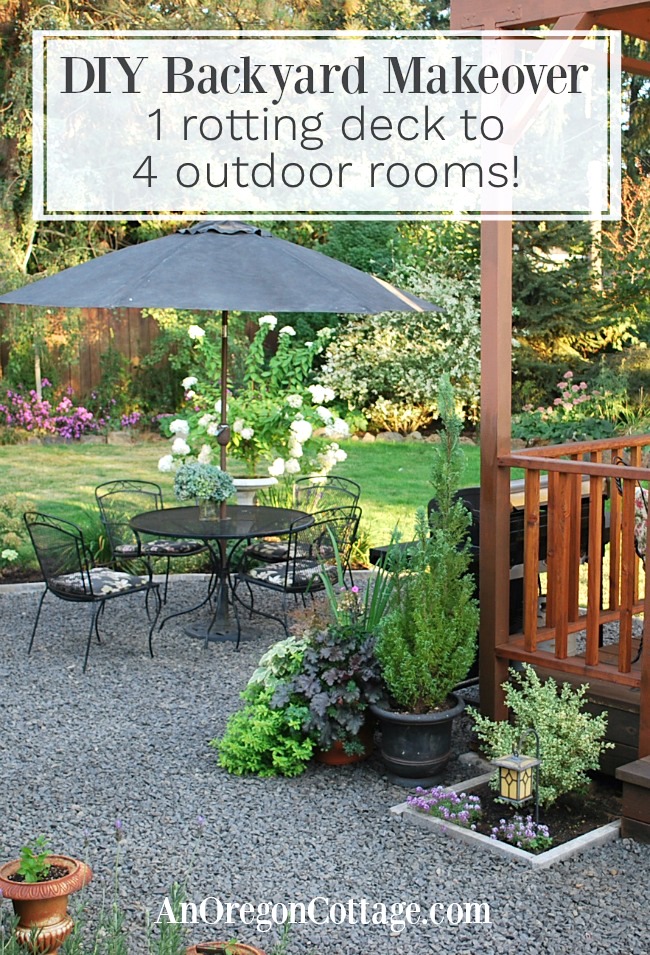 Hi friends! I can't believe that I'm finally able to share with you our finished DIY backyard makeover deck-to-outdoor-rooms project that we started way back in February of 2011. I suppose it's no surprise that DIY projects can take awhile, but there is also the issue of this being an outdoor project and we're just not going to work on it in the rain, cold, and snow, which I'm sure you'd all agree with, too.

We worked on it when time and the weather allowed, so even though it took awhile - and I'm grateful it didn't take even longer - I'm IN LOVE with the results!

It's everything I dreamed about as I'd stand at our french doors and look at this: 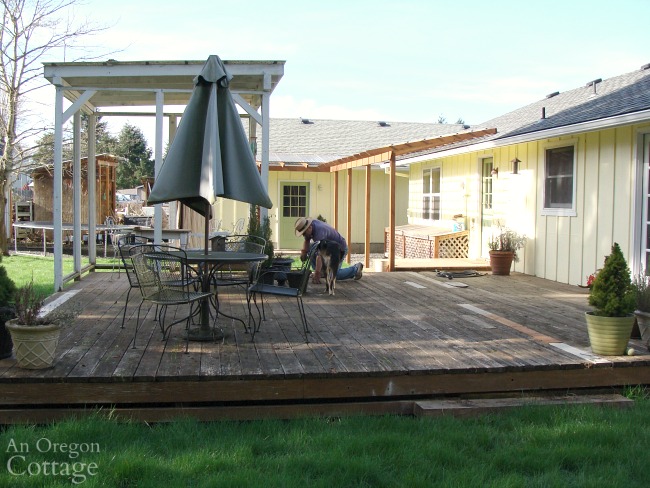 So much wasted space! I simply could not figure out what to do with that huge expanse of wood. Should the table be by the doors? Kitchen window? In the odd roof thing? But then what to do with all the wood area left? Sigh...look how lonely the pots look trying their best to fill in the space.

And don't even get me started on the upkeep or expense of replacing it. It was already rotting when we bought the house and we patched as we could for safety until we could take on the project fully.

I understand decks for houses that need them because of height issues - but this was less than two feet off the ground. I simply didn't get it - and I knew there could be a way to make this area pretty and a lot more useful on the cheap.

Now we have this beautiful area! It just makes so much more sense, don't you think? Plus, greenery and gravel is so much cooler (like, literally - it feels cooler when you're out there) and welcoming than a big expanse of wood.

We use this area SO much more now and it's beautiful to look at from inside the house as well.

Let's get to the before-and-after shots so you can truly appreciate the transformation! 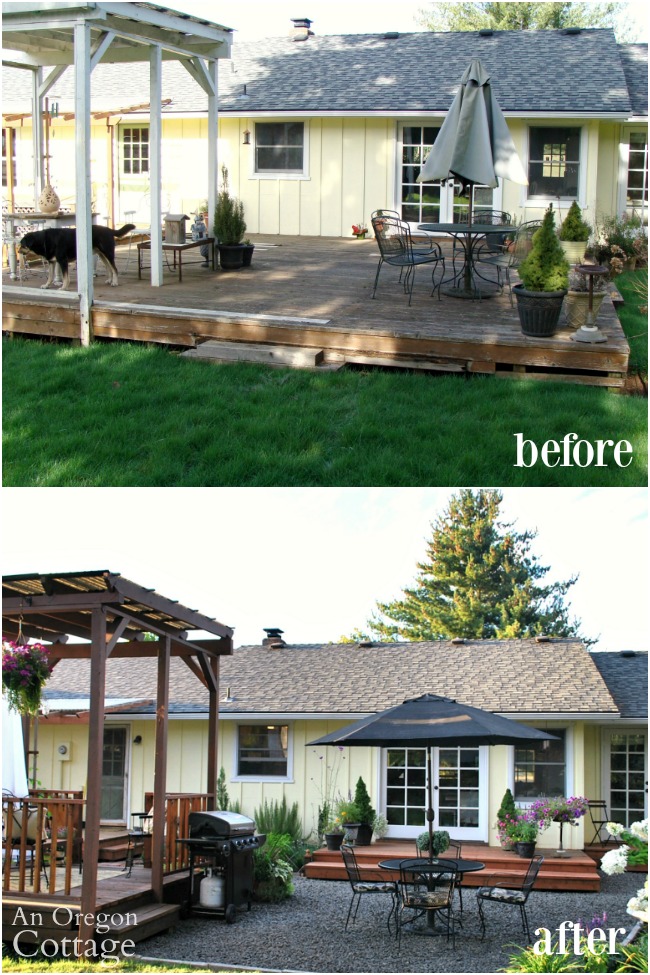 One of the benefits of doing DIY projects like this after living in a house awhile is knowing how you use the space as it is and figure out any quirks. In this case, we found we had to place our dining set towards the end of the deck to be shaded from the western sun at dinner time, the main time we eat outside.

So we created a much smaller deck entry area from the house with a step leading to the gravel dining patio. Now instead of seeming to randomly be placed far from the house, the patio makes it seem like the table and chairs belong there.

We had added an outside French door to our master bedroom when we did our big remodeling shortly after moving in which included the garage conversion, as well as installing the double set of French doors to the deck (btw - huge improvement, right?).

However, the master bedroom French door remained the door that led to nowhere for seven years. Ahem. One of the goals of the backyard landscaping project was to connect this door to the yard. Now it has a small deck and step like the entry deck which leads to the gravel patio area with it's own gravel path.

Before the house and deck seemed to project out over the yard instead of being a part of the yard. The pathways, small entry decks, and planting areas now help connect the yard to the house, leading you out and into the surrounding yard. 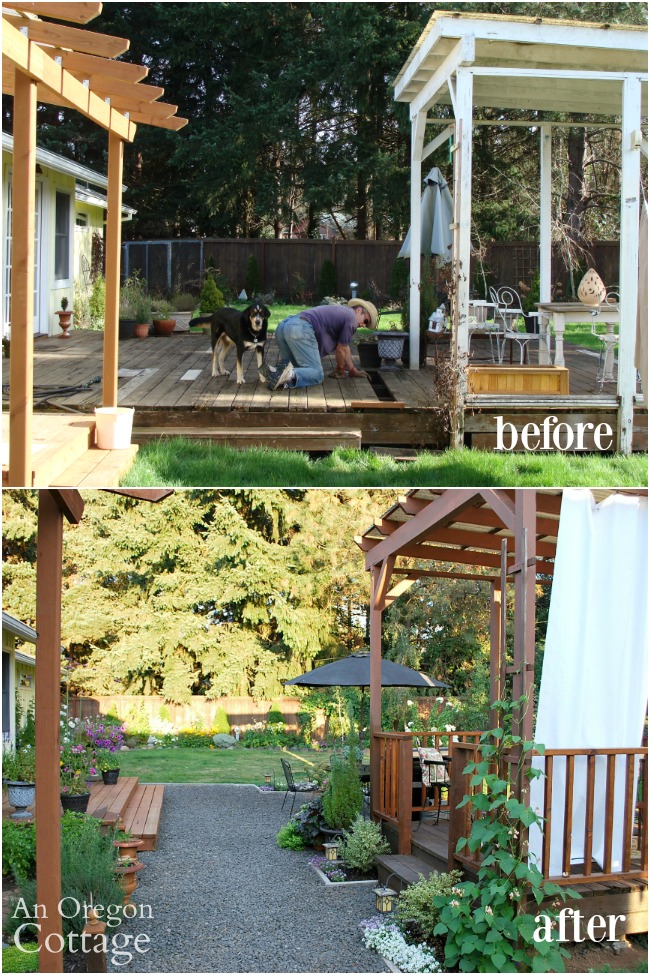 Here's the view from the other side of the former deck. You can see how the gravel pathway connects everything from the mudroom door (out of sight, directly to your left in the photo), past the outdoor "rooms" all the way to the master bedroom door. Which I guess makes this the hallway. Or whatever you want to call it, ha!

So, to recap, our huge deck became these four rooms: 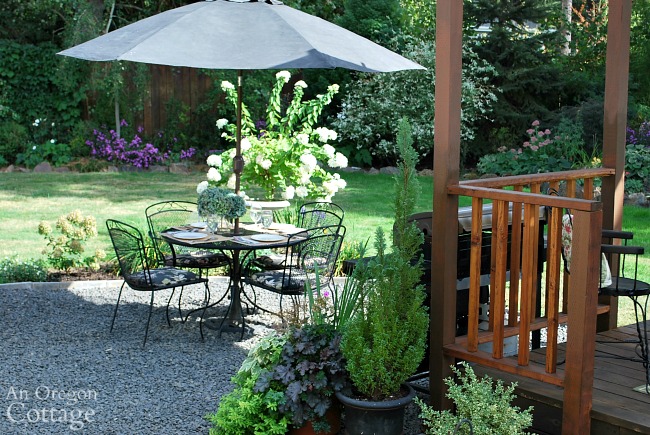 The dining area sits on a gravel patio with room for a grill and a new flower bed which holds, among other plantings, one of my favorite shrubs along with a concrete bird bath. Which the birds actually use - sometimes when we're out there! Major fun (OK, for us - remember we live in the country).

Using gravel for an area this big was really cheap compared to other options like pavers or cement. Not just the cost of the product, either, but the fact that it's a super easy DIY project anyone can do (well, as long as you can shovel and push a wheelbarrow of gravel around!). Plus it flows nicely from the connecting pathways.

Oh - I've been wanting to mention that the umbrella still looks great after spray painting it summer of 2011! I thought for sure I'd have to touch it up, but I didn't even need to. Just regular old spray paint. Amazing.

UPDATE: Since publishing this, I've gotten a number of questions about how we laid the gravel in this area. We did it like we've done other gravel pathways - laying thick plastic first, edging with this easy-to-find, inexpensive garden edging, and then spreading the gravel. We used a 3/4 crushed gravel without fines - that's the important part, if you get it with ‘fines’ (aka, sandy dirt) it creates a nice soil-like layer for weeds to root in, which we learned the hard way with our raised-bed paths.

The only weeds we get are those that blow in, which are easy to pull up in spring when they usually sprout. The edges of the gravel puts small holes in the plastic as it's walked on, so we've never had an issue with drainage (and we live in rainy western Oregon!).

Also, we thought we might eventually add pavers in the gravel just under the seating area, but the gravel has been fine and we've never felt the need - or the expense! 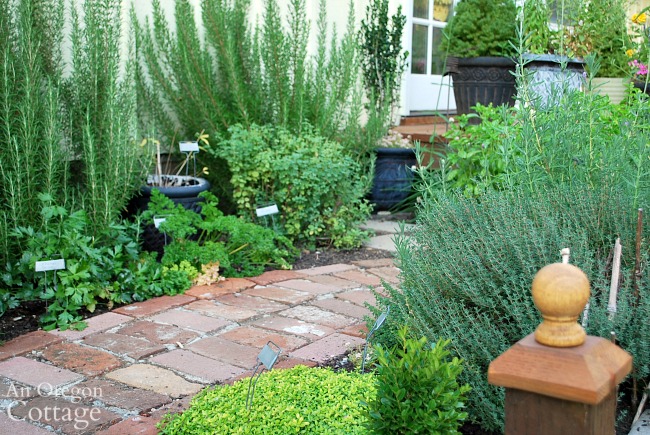 The herb garden with a path to the back door and kitchen is probably my favorite part of the makeover (you can go here to read about the transformation of the herb garden with before, during and after pictures). I had dreamed for years of being able to run out and clip fresh herbs for meals in a dedicated herb garden. I had grown some herbs in pots, but they never did as well for me as herbs grown in the ground.

Oh, and see the cute finial on the hose guard? We made it from a leftover piece of 4x4and Brian cut a piece of wood down for the cap. To make it prettier, we attached a regular wooden curtain finial ($6 for a pair- there's a matching one on the other side of the garden) which I coated in a water-repelling stain to make them safe for outdoors. SO much cheaper than fence post caps we found - I couldn't find any cute ones were all more than $10 each! 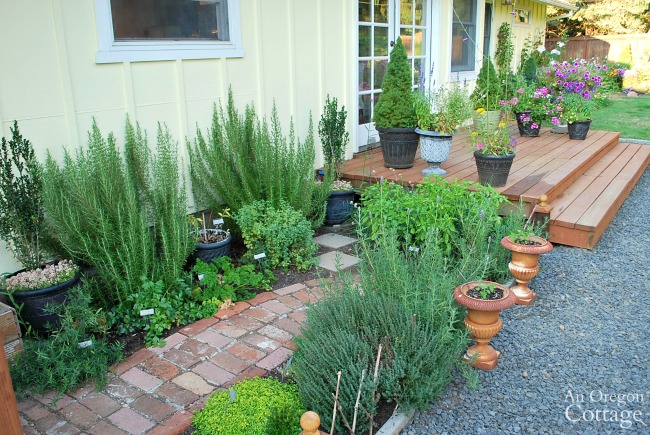 The entry deck to the backyard welcomes you to explore the yard and leads you to the other areas. It's next to the herb garden, so I can harvest herbs from either back door.

We were able to reuse the posts and 4x6 beams from the original deck, adding new decking wood and a wide step down to the gravel. Now the flower pots look like they belong there.

And finally the gazebo, which I sometimes refer to as our outdoor "living room." If you missed it, be sure to read all about the gazebo makeover and get the whole scoop on how it changed from a weird shed-like oddity in the corner of the deck to a fun place to hang out.

We love having a place to sit and enjoy warm summer nights, as well as shaded afternoon reading times. Especially after upgrading to cushier outdoor furniture. 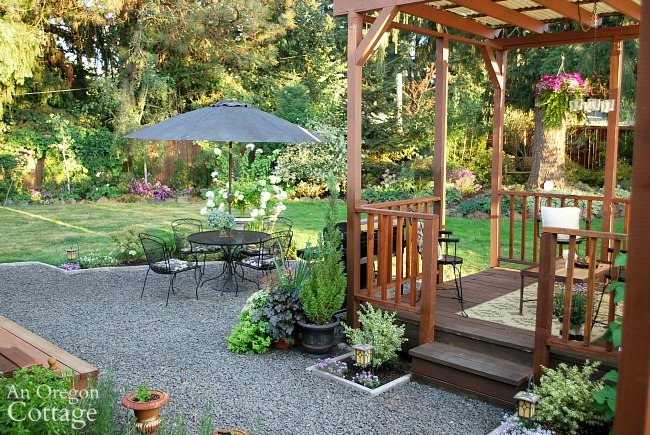 So...can you tell how much I like our new space? And not just me - Brian and the kids use it now, too - and they were hardly out in back before. One of the sweetest things is seeing our kids hang out in the gazebo with our dog, reading or talking. That makes this mama's heart happy.

What do you think of the transformation? Do you ever think about your outdoor space as rooms?