The early potato plants (Yukon Gold and a Red Norland) died back a couple of weeks ago, which is the signal that they are ready to be harvested. See how easy it is when hilled up with straw instead of dirt. 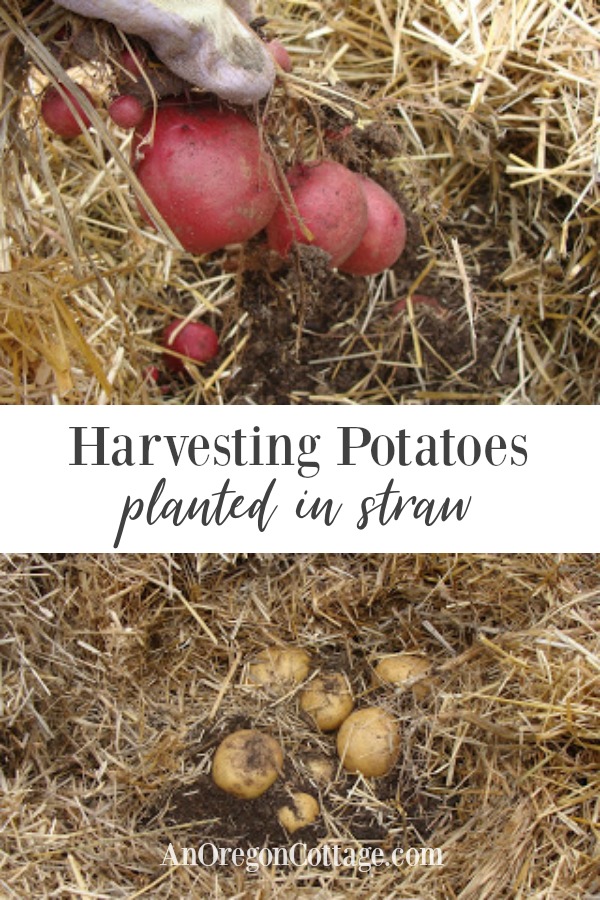 After explaining the way I plant potatoes and the reasons why I like to plant them this way, I thought I should show you how easy it is to harvest potatoes when the straw method is used.

It is one of the big reasons I like to hill up potato plants with straw - no digging around with a shovel or fork in the dirt, potentially spearing a spud. Simply pull back the straw and lift out the potatoes! The potatoes are also a lot cleaner and there's more for storage since you have less with cuts from tools.

How to Harvest Potatoes Grown with Straw 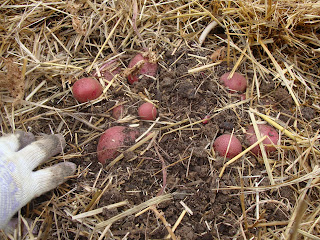 This is what I found when I pulled back the straw at the base of a mound where the potato vine had died. There are some potatoes on the top of the soil, and there are some just below soil level. 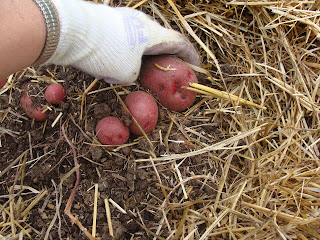 However, I can harvest them all with just my hands. I don't need any tools, so I don't run the risk of nicking any of the potatoes. 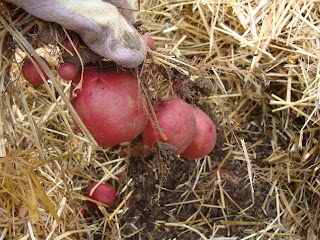 Here I am pulling up the vine and harvesting the potatoes still attached. Then I usually run my hands all around the planting area, removing any potatoes I find just below the soil.

See how clean they are? This is a major improvement over the traditional way of planting! 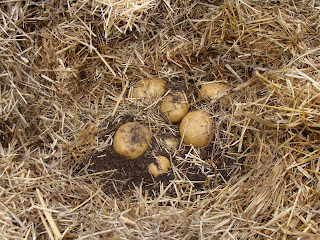 Here's a mound of Yukons- this plant produced more potatoes than the red one.

Isn't this something? I can't help it- I just get such a thrill when I pull back the straw and find all these potatoes where I had just planted one! And I didn't do anything other than put some more straw around them as they grew.

This is certainly my kind of gardening. And this is one garden tasks my kids (and their friends) always loved helping with. It's like a treasure hunt! 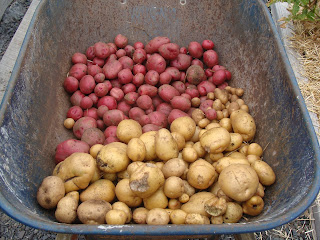 This is what I harvested from the early potatoes. It's a smaller amount than last year. I had bugs and field mice that I think affected the harvest.

I will leave them in the wheelbarrow for about a week in the warm, dry garage and then put the good ones in the old cooler I have for them to be stored.

Every year is different, though I'm certainly feeling harassed by the mice (voles), cucumber beetles, gophers, deer, and something leaving pinprick holes in the leaves of my beans and potatoes this year.

And speaking of voles... 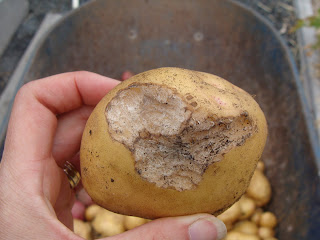 This is what a number of my potatoes looked like. Ugh.

I was actually surprised that it wasn't more, though. I thought they were using my potato bed as a little 24-hour restaurant.

At least they left more for us.