I've been wanting to do a series about remodeling our 1982 ranch house into a farmhouse-cottage, which was mostly do-it-yourself and on a pretty tight budget! We learned a lot of DIY skills working on our first house - a city bungalow - which helped with this house, though the learning never ends, it seems. So I'm starting a remodeling series that will take you through the before and after stages of our house through the last five years, both inside and out.

With this series I hope to:

For this first part, we'll start with the outside and what we first saw when we drove up to our house... 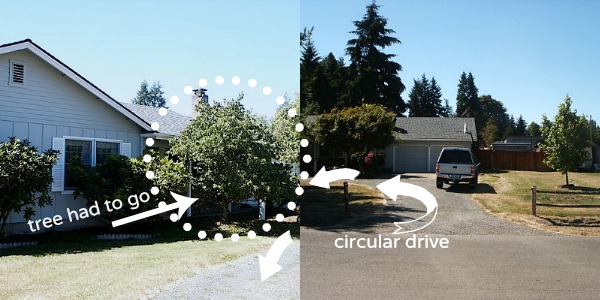 This is our house the day we signed the papers in 2004 (no full shot, unfortunately, but I think you can use your imagination - plus there's a  shot of the house a few months later in a bit...). I had dreamed of an old farmhouse, but we found out pretty quickly in the hot market at the time that there would be no old farmhouses in our price range- not even fixers.

There were, however, a few 70s-era ranch houses. They shared the long, low roof lines and narrow windows set very high on the wall typical of the style. The living room windows were usually huge plate glass, which I knew were very hard to cover nicely. I was a little discouraged. Those houses just seemed so dark and small and very hard to work with.

Then we found this house and I breathed a sigh of relief because I knew we could work with it. Built in 1982 it did have some 70s fixtures and linoleum, but it also had large double-hung windows made from wood and vinyl (unheard of in '82!), a sweet 3-window set in the living room, high wood ceilings, some wood floors, and lots of built-in cupboards. All the wood doors and cabinets were quality solid wood with routed panels, and if you're familiar at all with ranch houses from this era, you know how amazing that is. 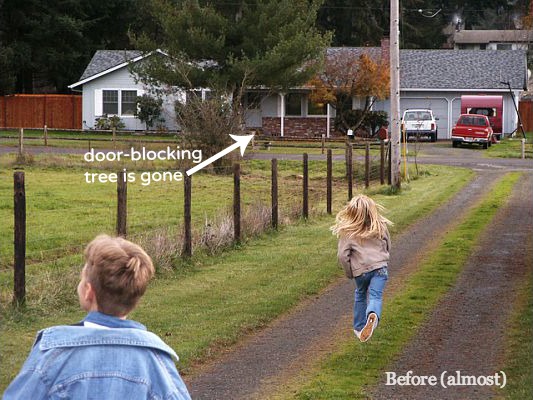 This is what the house looked like a few months after moving in and after removing the tree that blocked the front door (isn't it cool how my daughter is literally "flying" home from the neighbor's?).

While I was happy to find a house we could make our own, the major thing we needed to deal with as soon as possible was the lack of room. We had come from 3 floors and 2200+ square feet in our old house. Our new ranch was 1600 sq. feet, which wouldn't have been too bad if not for the fact that, not counting the bathrooms, there were only FOUR rooms in the whole house! Three bedrooms and one great room containing the kitchen, living, and dining areas. With two self-employed people, you can imagine how difficult it was to work during our first year in the house. 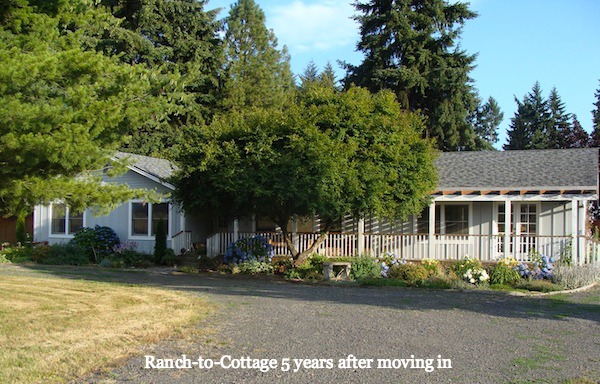 So our first major remodeling (after removing the door-blocking tree and painting EVERYTHING inside, which you can see here) was converting the 24x28 attached garage into living space (read about that here). We were able to break ground 6 months after moving in and moved in 5 months later. This resulted in a long porch, French doors, a welcoming front door, and a cottage garden - which all went a long way to erasing the 1980s "ranchness" from our home.

Here are some details about the remodeling we completed that turned our rancher into a cottage:

Garage Before and After 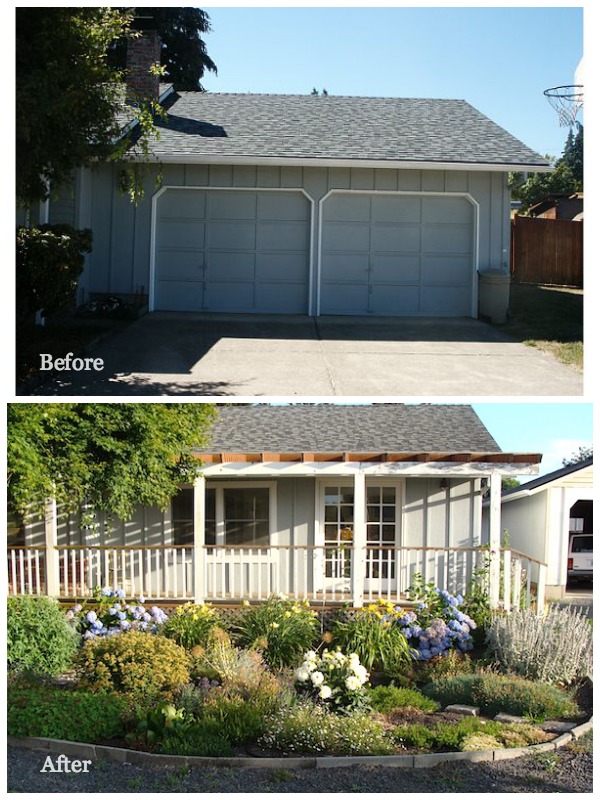 The garage morphed from a typical 2-car set up into a 600 sq. ft. space containing a lovely light-filled room in front (seen through the windows and French doors above) that I use for my office, Brian's office, and our laundry mudroom. We had put aside money from our first house's sale, so we were able to hire someone to complete the framework of this conversion. We then took over for the electrical, heating, and all the many aspects of finishing.

Since I've never liked houses with converted garages where the driveway still goes right up to the new area, we broke up the partial cement driveway, built a porch, and planted flowers to make it seem like there was never a garage here. And it worked, as no one can believe it was a garage when I tell them.

Front Door Before and After 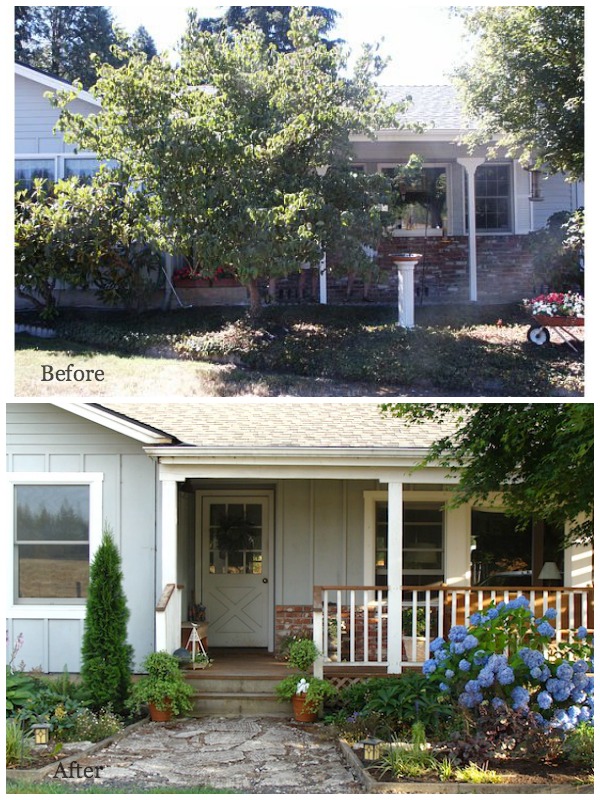 The one area I that couldn't stand (even for a few months) after we bought the house was the front door. It was completely hidden by a tree planted in front of it, which I didn't find very welcoming. Plus, it made no sense with a circular driveway: people would park on the driveway where they thought the door was, and then attempt to reach the door by walking over the flower bed and ducking under the tree. Needless to say, we cut the tree down within the first month.

After the porch was finished, we used some of the broken concrete from the driveway to make a walkway from the circular drive to the door, so there'd be no question of where to find our door. We also landscaped on both sides to even up the beds around the drive. Another thing we did to add cottage character was replacing the siding around the main windows to match the rest of the house and adding molding around the windows to make the three windows all look like one together (read more about adding cottage character here). 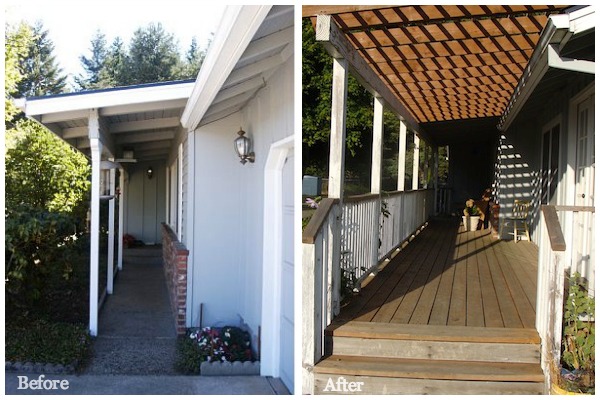 Originally, a guest had to find our door by parking on the circular drive, find their way back to the driveway while navigating around the cars parked there, and walking up this narrow cement porch past the front windows before reaching the door (whew - you can see why people would brave the flower bed instead). When we added the porch were able to expand the original portion from 4 feet to 6 by moving the porch posts out to the end of the porch roof (you can see the 2-ft. overhang in the before photo). It is 7 feet in front of the new area. We saved money by making the new roof a simple pergola that attaches to the existing porch roof.

Front Garden Before and After 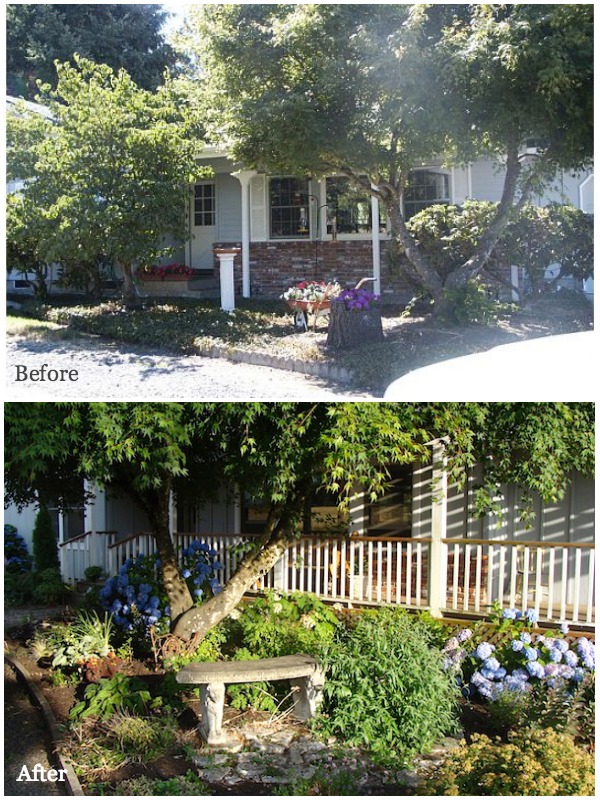 Above is another photo of the front before and the glimpse of the front door you could see the door as you drove into the driveway - and how frustrating it was to not be able to get to it easily. Our front garden after remodeling includes broken concrete paths created from our old driveway and easy care cottage plants like hydrangea, spirea, daylilies, heuchera, and brunnera.

Bedroom Wing Before and After 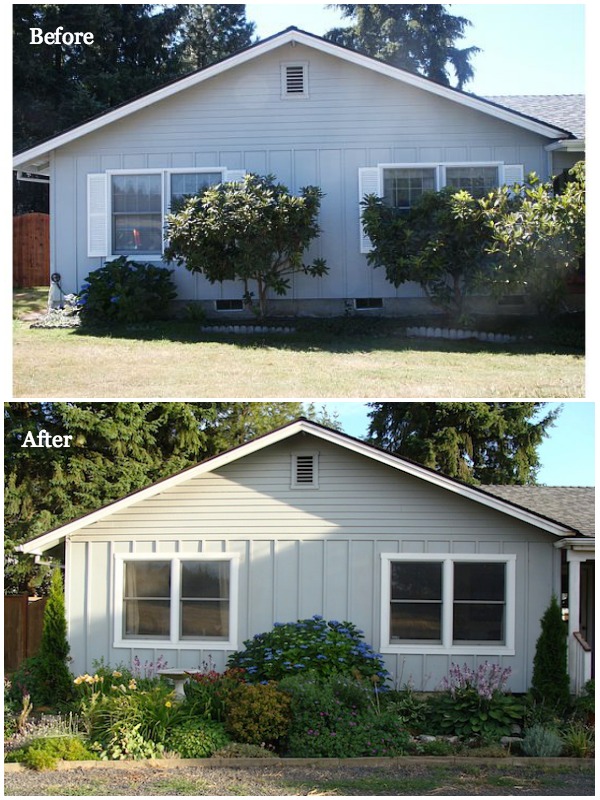 We also landscaped the area in front of the bedroom windows. Before, the rhododendrons were overgrown and the flower bed cut crazily across from the "front door" area with grass in front, which looked very odd with the circular drive. We removed the rhodies, and moved a lacecap hydrangea (which got huge the year after the picture above was taken) from in front of a window to the center where it could grow as big as it wanted. We brought the landscaping all the way to the driveway to echo the right side and planted low growing boxwood under the windows as well as more of the same cottage flowers from the other side of the entry walk. The broken concrete path goes through this section, too, next to the birdbath.

We also removed the shutters (I really don't care for shutters that are smaller than the windows...) and replaced the wimpy molding with wider pine 1x2's painted white. 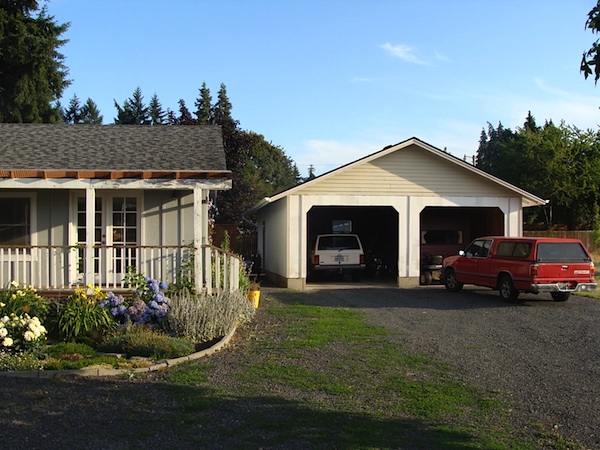 I'm ending this with a view of our almost-finished garage, which I am really happy about after living for four years without garage or basement for storage. It was started July of 2008, when we hired the floor, sides and roof done before taking over to finish it by ourselves. Sigh. I sure wish DIY  projects didn't take so long. (update: you can see the finished garage in this post about painting our house, yeah!).

In our defense, we did redo two bathrooms at the same time, and they are mostly done. And we love our remodeled ranch to farmhouse cottage - no matter how long it takes, it's great to be in a space that fits us!