Think you don't have enough space to garden on your city lot? Shannan proves you can harvest big in a small area and do it with style. 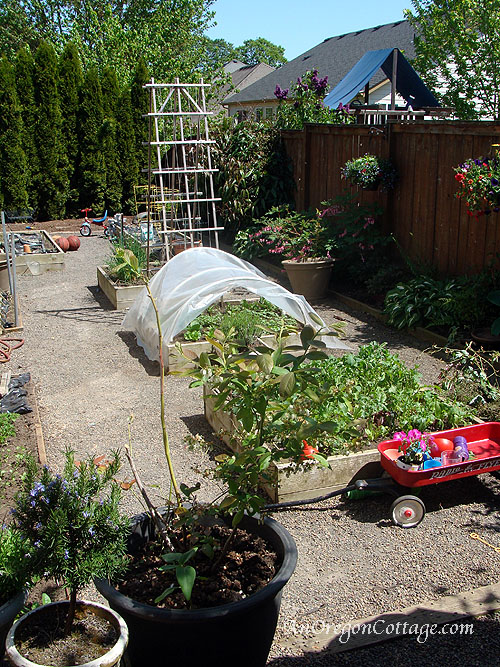 One of the first handful of participants here at the Tuesday Garden Party link up when it first started was a reader named Shannan. Through the years I have gotten to know her through her Salem, Oregon garden, pictured above, that she has shared with us.

I've been especially impressed with Shannan because she took a little sliver of a backyard and made it produce enough to feed her family and have enough left to can and freeze. That's my kind of girl!

One thing I've never been able to do before since starting AOC is this: 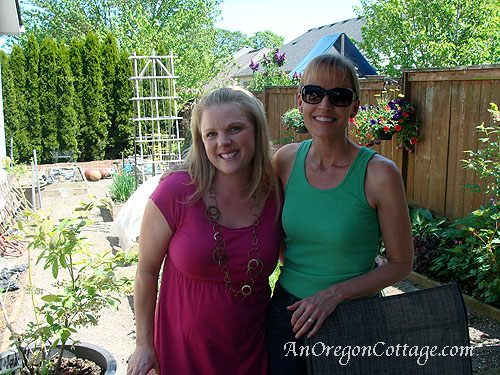 That's me with Shannan! Can you believe it? It's a first here - me meeting a reader - and I'm still kinda giddy about it!

How did this even happen? Well, I plan on stalking all of you through the Internet until you allow me to visit your homes, and Shannan was the first on my list.

Remember when I whined complained that I hadn't started any plants from seed for the first time in more than a decade? Shannan left a comment offering me her extra starts if we could figure out a way to get up there.

I was floored by her generosity, but to be honest, I didn't think it would work. We're an hour south of her and with gas prices so high, I couldn't just drive up there (that would pretty much negate the savings on the veggie starts, wouldn't it?). 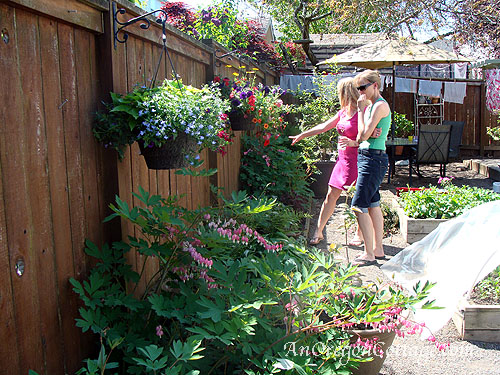 But then I found out we had to be in Salem for our daughter's district track meet and I emailed her on the off chance she lived near the high school where they were being held.

Guess what? She lived 8 minutes from there!! Seriously it was meant to be - the weather was beautiful, and her son's baseball game was cancelled, so she'd be home when we could come. Yeah!

Isn't her shade border, above, just beautiful? And it's only the beginning of the season here. You can see I'm seriously studying it...kinda looks like I'm trying to figure out a way to steal some of those bleeding hearts, doesn't it? 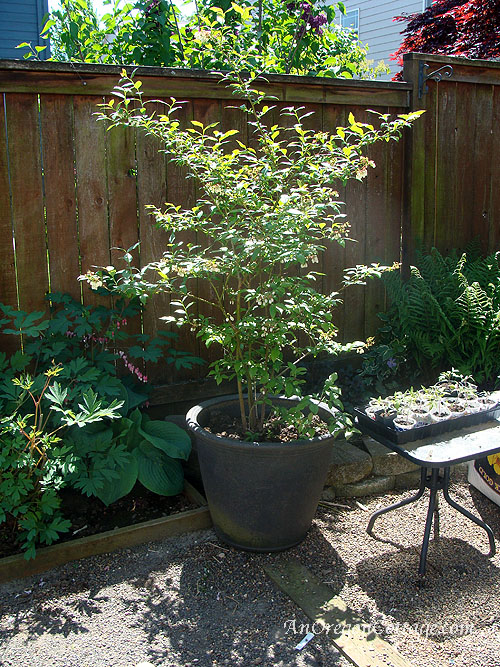 This, however was the most amazing thing in Shannan's garden. This blueberry in a large pot started as a typical twig a couple years ago. In fact, she said she also planted a couple in the ground at the same time - and, get this: the plants in the ground still look like twigs.

Seriously, I saw them (still can't believe I get to say that!), though she potted them up this year since the two she initially planted in pots grew to be these huge 4-foot-tall bushes, one of which you see above. 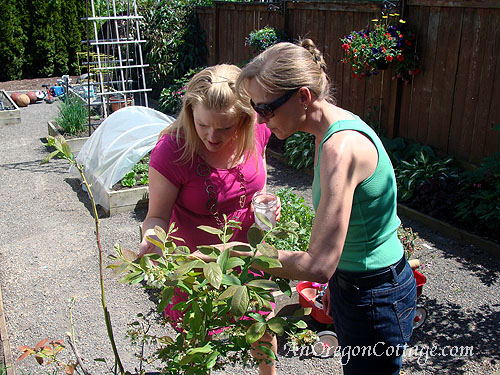 Sadly, the other bush, which resembled the former just a bit ago has contracted some sort of fungus that's shriveling all the blooms and browning the leaves. Shannan doesn't know what it is (and neither did I), but she's trimming off the affected branches in the hopes that the unaffected ones won't get it.

Why this whole blueberry-in-a-pot-thing was amazing to me is that my experience has always been that plants do better in the ground. Obviously, you can grow most things in pots, too, and with care they will thrive, but given a choice, the ground usually wins out. I've NEVER seen this type of dramatic difference between plants grown in the ground versus pots before- have you?

(Oh, and Shannan said she used a mix of compost, garden soil, and peat moss - the key, she feels - plus coffee grounds. I'm definitely adding coffee grounds and peat moss to my in-ground blueberries to see if I can get some of this great growth, because I just can't see me digging them all up!). 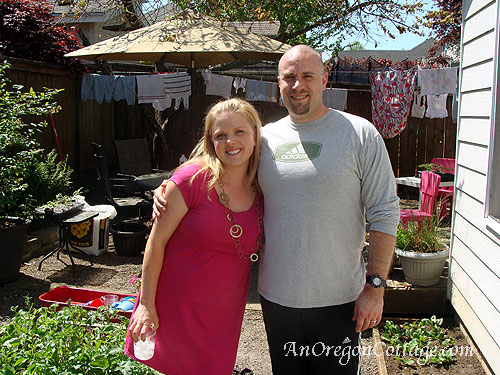 So thank you, Shannan (here with her hubby, Jeremy - aren't they sweet?), for hosting this Internet stalker (and her husband...yeah, Brian took all the photos), showing her your garden, and sharing your tomato, pepper, and basil starts - I'll never forget it!

What were you most inspired by?