If your tomatoes start to turn yellow and then brown on lower and inner leaves in June or July, it's probably early tomato blight. Don't worry! You can keep your plants producing until frost with these simple tips. 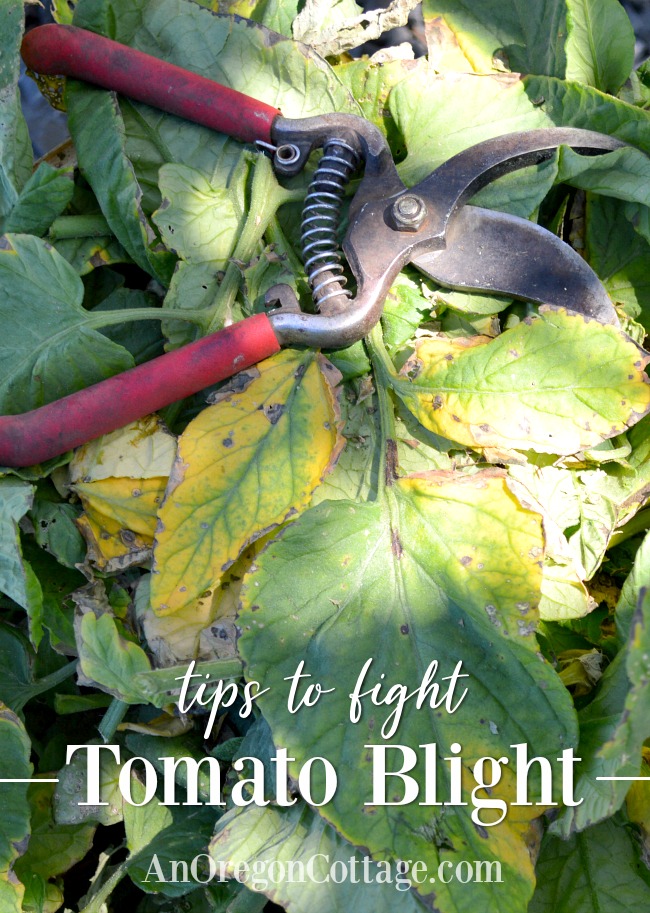 How was your July 4th weekend? Full of fireworks and food I hope! I had the food and fun time with our family, but passed on the fireworks (I know, we're lame).

You can see from the title, though, what I did with the gardening part of my weekend -  I fought the early tomato blight that has overtaken many of our tomato plants in a short time.

Tomato blight, however, is nothing new in the garden. I pretty much deal with it every year to one degree or another and I'm pretty sure that's similar to gardeners everywhere!

Luckily, there are a few easy things you can do to help your plants produce until the frost - I've never completely lost plants earlier than October (when our first frost usually hits) using these tips. 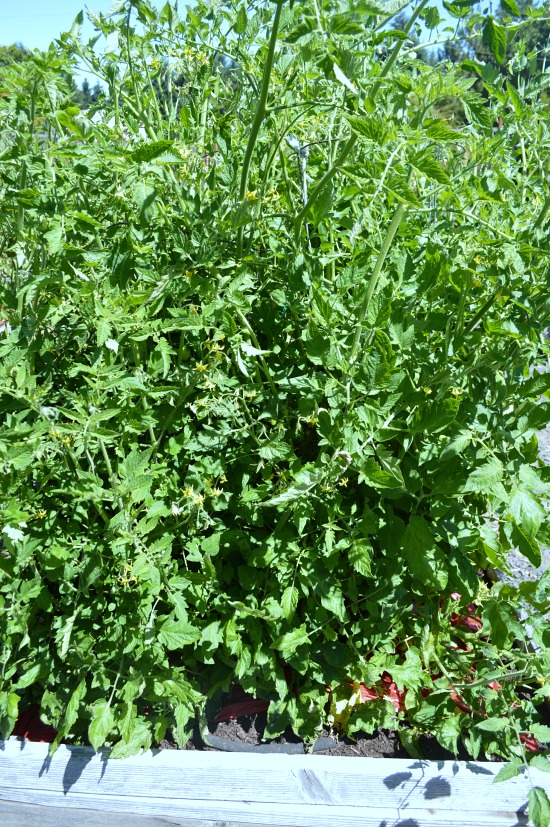 If you grow a number of tomato plants like I do, you'll notice that not all will have blight.

The photo above actually shows two healthy plants - a Black Cherry and a Honey Bunch Grape (they look pretty squished here, but really do have plenty of room). Being small tomatoes, they are planted in a bed of their own - because they're basically monsters, ha!

I did trim the bottoms up a bit after taking this photo - I always do on tomatoes a few weeks after taking the tomato covers off the beds just to increase the airflow to discourage fungus like blights.

However, there doesn't seem to be much rhyme or reason to which plants get blight and which don't. I've always heard about air flow, but you can see from the photo above it's pretty dense and there's no blight on this plant.

While I usually always prune the bottoms of tomatoes in June, this year with our graduations and a few other things, I hadn't gotten to the pruning yet. And when I looked most of the other 16 plants were well on their way to loosing the battle with early blight.

Note: You'll also see a good amount of flee beetle damage on the leaves, but it doesn't usually affect the growth or fruit so I just ignore it.

What is Early Tomato Blight? 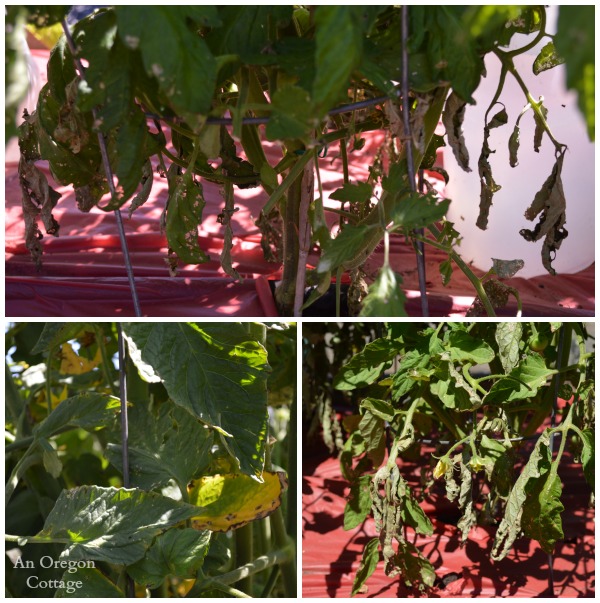 What is the difference between early and late tomato blight?

Early tomato blight is caused by a different pathogen than late tomato blight. They also look a bit different - early has brownish spots and yellowing leaves that turn brown, while late blight has spots that start pale green on top and purplish-black on the leaf underside, which later develops a white ring before turning black-brown before dying.

Early blight can be fought pretty easily, whereas late blight will usually kill the plant.

Leaves and stems with early blight will develop dark spots (brown to black) and leaves will turn yellow before eventually turning brown and dry. It usually starts at the bottom of plants (though you may notice some in the middle of plants) and works its way up the plant if left unchecked.

What can make tomato blight worse?

While I have a bit of early blight every year (it's pretty much guaranteed with our wet springs and cooler summers) how did my tomatoes get it so bad this year? 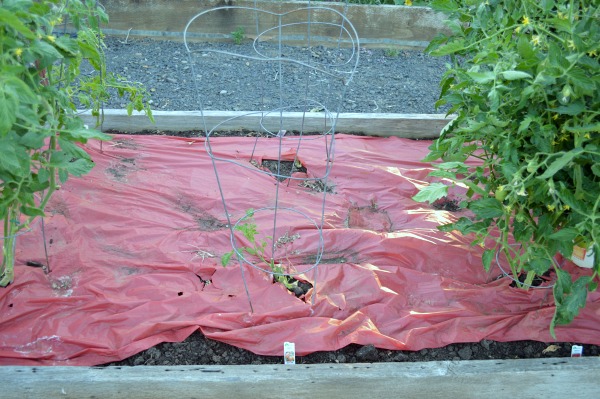 As you can see, the two store-bought seedlings were goners - there wasn't a leaf on them that wasn't affected, so I cut them to the ground in an effort to save the surrounding plants. Of those plants, two I had to prune really hard and two others moderately - only time will tell now.

How to Fight Early Tomato Blight 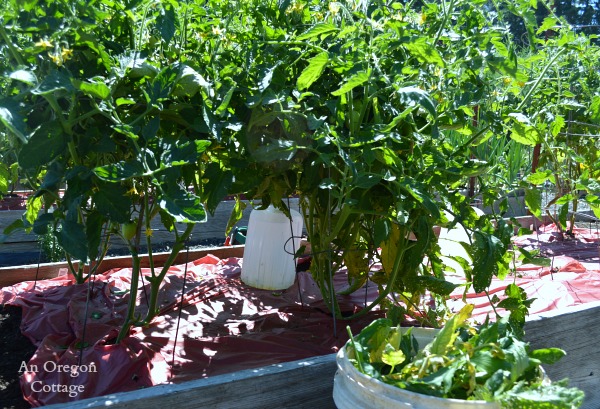 How to Prevent or Minimize Tomato Blight

I say minimize because I always do the things recommended to prevent early blight and I still get it every year, though not to the degree I had it this year.

Here are the good organic gardening practices you can to to keep tomato blight at bay: 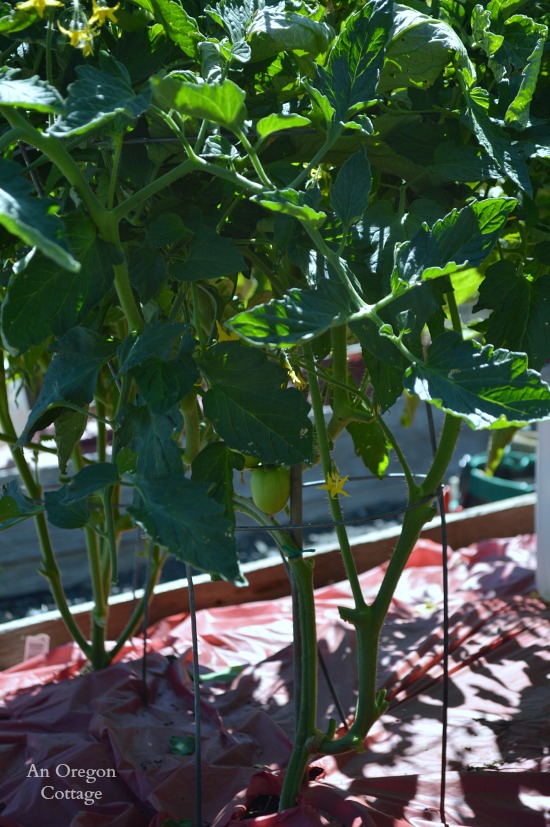 What about blight resistant tomato varieties?

The one thing I don't really pay attention to is planting resistant varieties - there are so many tomatoes I want to grow, I couldn't imagine being limited by this list, could you?

However, according to this article on early tomato blight, these varieties are sometimes resistant to the fungus:

Of these I have grown Legend, Juliet, and Tigerella, which were all good. Maybe plant a few resistant and a few not and compare?

While late pruning, I'm happy that I've got pruned plants now that should survive until frost and be able to produce all the fruit we need for our salsa, roasted tomato sauce, addictive tomato chutney, and more!

Do any of you fight early blight? How do you like to deal with it?