Happy Tuesday! Which thankfully started out a lot better than this day that we woke up to a few days ago: 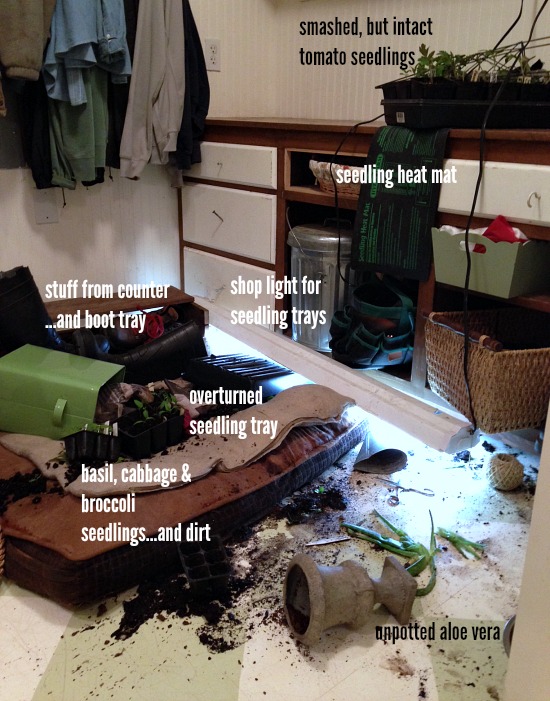 Some of you may remember something that looked very similar to this from last year – only slightly less destructive, as you’ll see in a moment.

Yes, our dog Samson again went crazy in the mudroom/laundry where he sleeps at night. We couldn’t figure out what it was last year, but after happening twice in a row (agh!!) we concluded it must’ve been a mouse he was after.

Oh, and after posting this on Instagram and getting a comment about the dog, I should point out that this dog is the sweetest, gentlest dog there ever was – and I’m not just saying that. The only time he was destructive was in the first year we had him and he chewed everything he could find – but that’s not unusual in young dogs. He’s 8 now and doesn’t chew at all.

Plus he loves his room and bed – he often goes there just to get away from the hustle and bustle of our family life. He has never had something happen like this before until last year – and now this a year later. 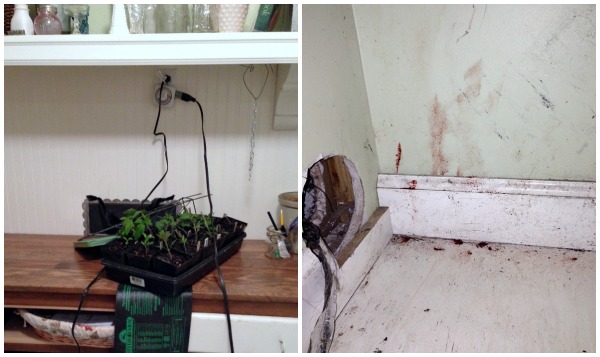 While there was a lot of overturned seedlings, I was relieved to see that the tomatoes managed to stay upright (though two were only left with stems).

I was not so happy about what we found in the little clothes-drying closet next to the washer and dryer. That’s it on the left above {please ignore the dust, it was behind a dryer vent!} – you can see where the dryer vent came through the opening…and the blood left on the walls from Samson completely tearing up the dryer vent and metal wall attachment-thingy. Can you believe it? He’s fine, amazingly – we never could find and injury in his mouth, so we’re thinking it was a gum bleed that stopped pretty quickly.

Since this is a whole new thing – attacking the vent – we can only conclude that it’s not a mouse. Especially because Samson’s done nothing even remotely like this since the last time a year ago…when there were seedlings.

My new theory is that it has something to do with the shop light coming on – it’s on a timer for 6:00 am – and there must be a high-pitched sound that the fluorescent light emits that drives him crazy. We see a little of this whenever our smoke detectors start beeping, and it’s all I can think of, especially since the overturned seedlings were not wilted at all by the time we found this at 7:00am.

So – no chances anymore, his new sleeping arrangement is in the hallway until the seedlings are safe in the garden. And yes, I will have another year where I don’t know the exact varieties…sigh. But I was able to salvage most of the overturned seedlings – after 1-1/2 hours of clean up and repotting.

UPDATE 2015: Yes, it must’ve been the lights! When it was time to start seedlings this year, we moved his bed to the hallway the whole time the lights were going and moved him back when they were all safely planted. No incidents – yay!

We were so sorry to have caused him such distress – it’s a bummer dogs can’t tell you what’s bothering them, isn’t it?