Hey there sweet friends - do any of you remember that back in January one of the goals I listed was to pay cash for a trip to Greece and Kosovo? Well, I'm thrilled to be able to tell you that we just returned from a two-and-a-half week trip of a lifetime for us visiting these beautiful countries and our friends and family who live there!

I hope you don't mind my sharing some of our photos with you as an introduction today because over the next few weeks I'm going to be showing you lots of details about the gardens, food, cities, and lovely people we met.

I found tons of inspiration and came back with a few wonderful recipes, too, and I'm excited to share them with you - seriously, it made the trip even more fun to be thinking of all the ideas and photos to show you all! 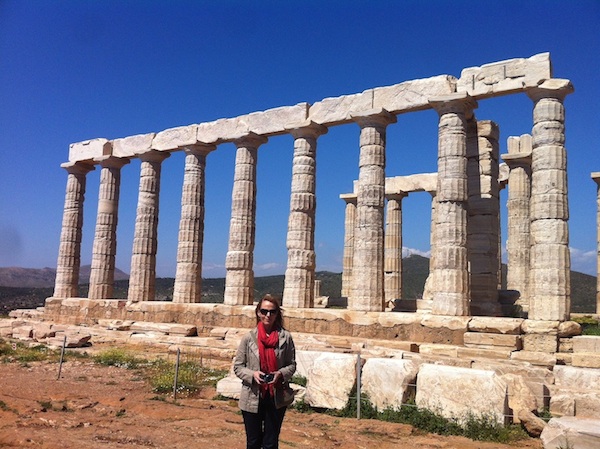 On our very first full day after flying into Athens (first transatlantic flight for me - whew, is it long!), our friends who had invited us to visit Greece took us south of Athens along the coast to Cape Sounion where we saw our first temple ruin - the Temple of Poseidon.

The weather and view were incredible and we soon discovered that if we took pictures without someone in them, it just looked like we pulled an image from the internet! And yes, the sky really was that blue - no photoshop necessary! 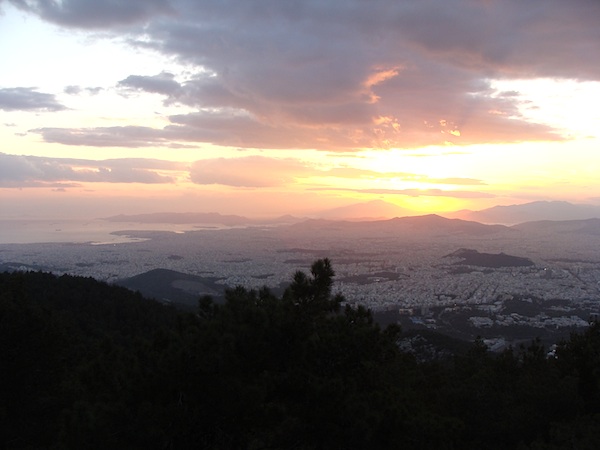 That evening we viewed the sunset from a hilltop east of the city of Athens. It's huge and breathtaking. 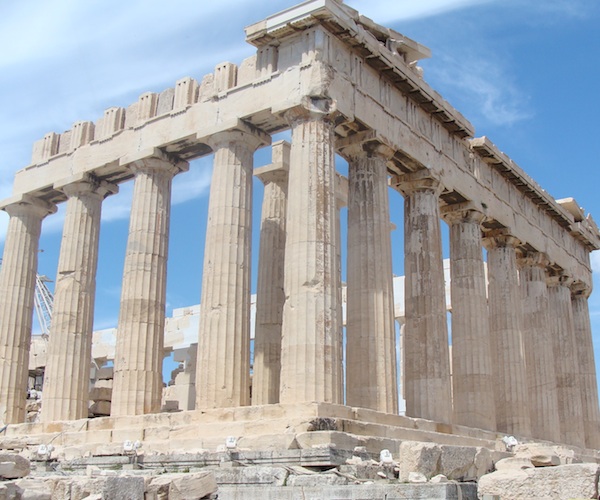 The next day we visited the Acropolis where I took this photo of the Parthenon - this is the view most often taken, as you can't see all the ongoing work and scaffolding from this angle.

See what I mean about taking a picture with no one in it? How would you know I didn't just pull this from some web site and tell you we were there? 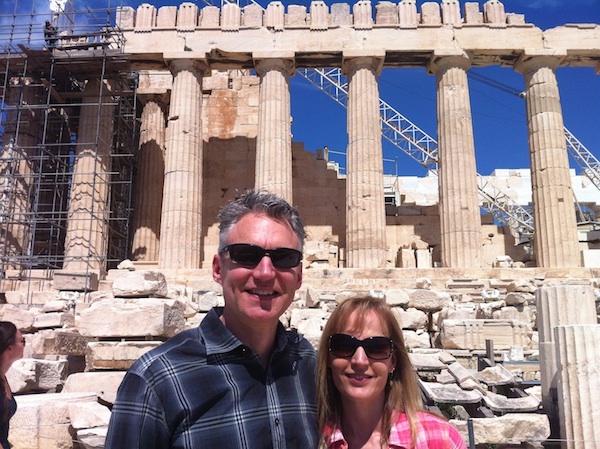 Ha! We really were there - and we found a student visiting from England to take this picture to prove it.

You can see more of the scaffolding here - our friends have lived in Athens 22 years and they said it's been half covered in scaffolding all that time. It's a continual restoration/shoring up project. 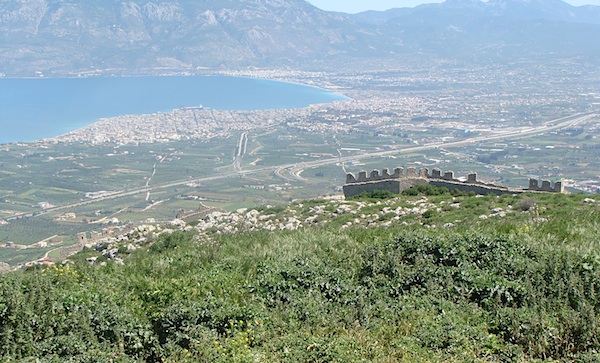 This incredible view was from atop the ruins of a temple to Aphrodite on a hillside overlooking modern Corinth, the Gulf of Corinth and the opening to the famous Corinth Canal.

Oh, and that castle wall ruin in the foreground? Yeah, just part of a newer medieval castle we hiked up the hill to see (called Acrocorinth) - not ancient or anything (tongue firmly in cheek - with all the thousands-of-years-old ruins everywhere, things hundreds-of-years-old began to seem new!).

Seriously, this enclosed castle-city was huge - it's hard to believe how they were able to drag everything up there hundreds of years ago, though I did read it took 400 years to build and a number of different people groups used it (Romans, Byzantines, Turks) and added to it. 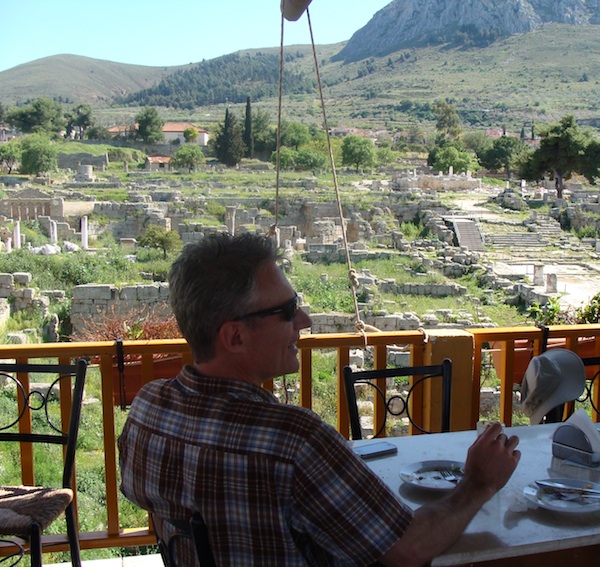 Down from Acrocorinth is the ruins of Ancient Corinth and after taking a walking tour we had a wonderful Greek taverna meal overlooking the ruins with the group we were traveling with from Athens.

A piece of heaven - I just sat there soaking it all in, because I couldn't believe I was really there!

On a side note: the taverna owner also has orange orchards and this is where I ate the most incredible oranges I've ever had - so juicy and dense that even people who don't normally like oranges were eating them. The produce in Greece was amazing - and one of the many surprising things I learned. 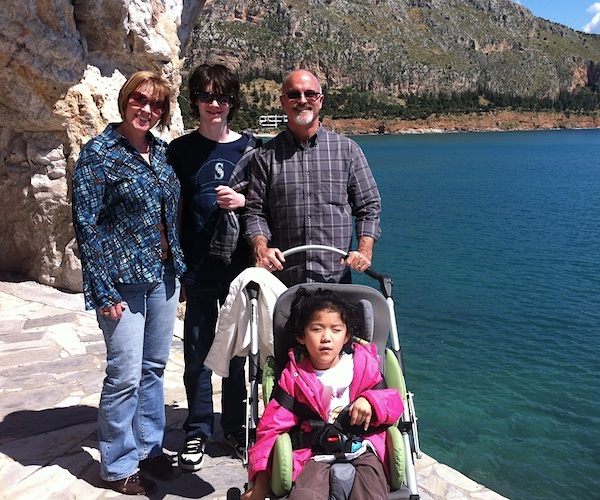 On our last day in Greece, we had planned to take an island cruise - doesn't it seem like you should if you visit Greece? The evening before our planned cruise we learned the boat workers were striking (a common occurrence, apparently, with the austerity cut-backs) - bummer.

But our lovely friends - and they are as sweet and wonderful as they look here - offered to take us to Nafplio, a wonderful town on the coast south of Corinth. 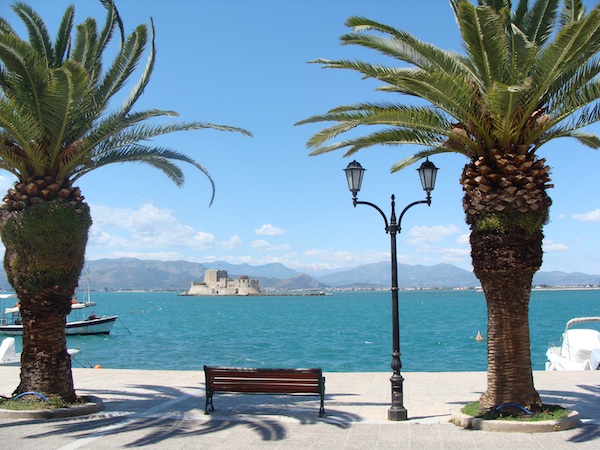 And we are so glad they did, as Nafplio is really lovely with open-air plazas, tavernas, narrow streets with quaint balconies, and a lovely paved walkway along the sea.

It also has this island castle in the middle of the harbor. Sometimes it just seemed like there was too much to take in - it was all so beautiful. 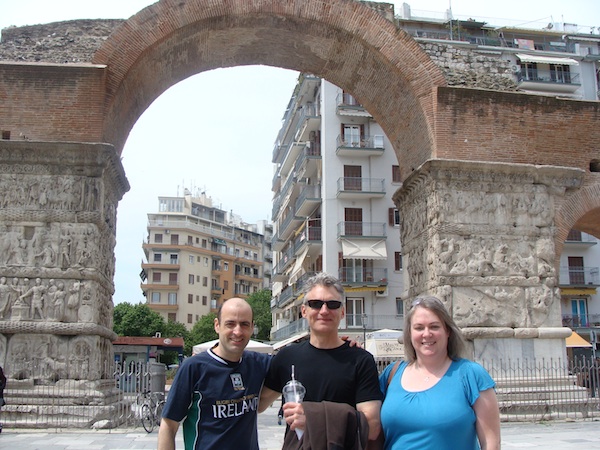 After a little over a week in Athens, we took a six-hour train ride north to Thessaloniki (the ending is pronounced neeki by the Greeks, not like nike) through the lush countryside full of olive groves and farms - and past Mt. Olympus (!).

We met up with my cousin and his lovely Irish wife who had driven down from their home in Kosovo.

We toured more ancient structures in this seaport city and ate more amazing Greek food at a taverna on the water, but the best view was probably this: 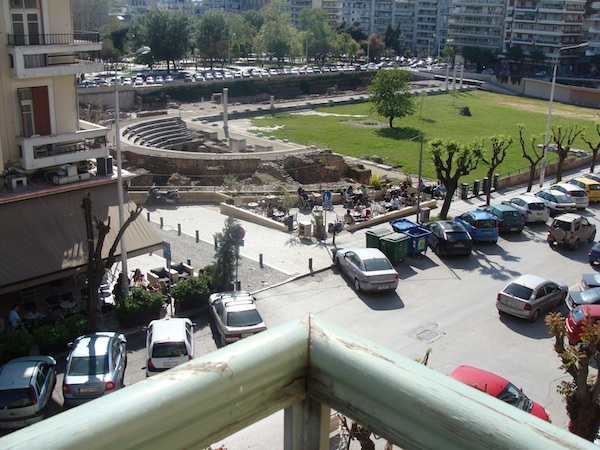 The ruins of the ancient agora (town center-marketplace) of Thessaloniki as seen from our hotel balcony.

Which was free to visit, by the way, including a wonderful new museum that is under the grassy center you see. They still use the amphitheater - we saw a quartet performing at one point - and the cafe seating overlooking the ruins was usually full. 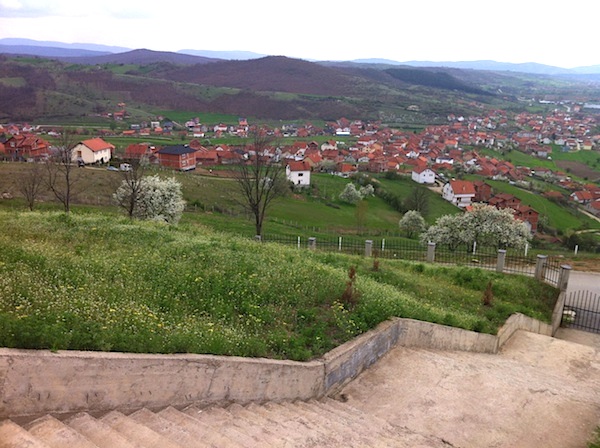 After a couple days in Thessaloniki, we drove with my cousins through Macedonia to the small town of Kamencia where they live in Kosovo.

Kosovo has a fairly recent war-torn history and they call small towns 'villages' there, so I wasn't sure quite what to expect. As you can see, it's beautiful, with green rolling hills and tile-roofed houses nestled into the valleys and hillsides. 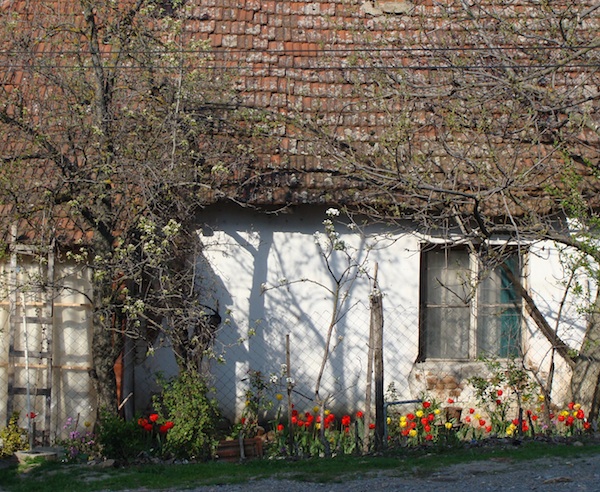 When I pictured visiting the 'village of Kamencia' that my cousins talked about, this little cottage is the type of housing I thought we'd find there. And there were a few here and there.

But mostly there were these houses: 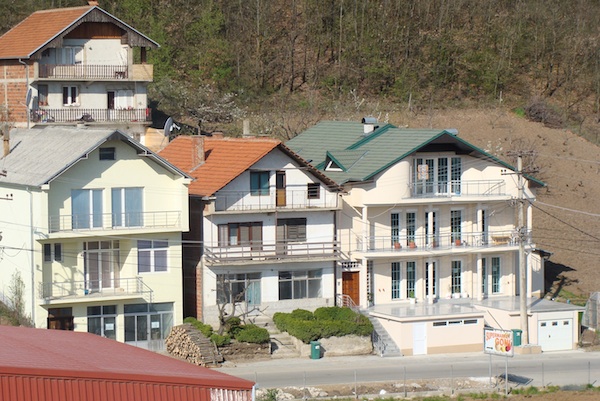 Hundreds and hundreds of new multi-level houses and lots more being built. Plus new walkways, supermarkets, and restaurants. They are still in a rebuilding phase after the war.

We did, however, see lots of flocks of sheep with shepherds watching over them (in rural Greece, too) and old men watching over small groups of cows they take for grazing walks.

And a drive through the hilly countryside turned up many smaller villages that looked just like I pictured - complete with chickens free-ranging all over the place.

Oh dear, 13 photos and a thousand words later my 'intro' is close to becoming one of those slide shows you squirmed through as a kid when drug to your parents' friends house after a vacation!

So I'm ending here with this last thought: we are so incredibly thankful to our hosts and blessed to have had this opportunity - which we did pay for with cash, yay!