I've been wanting to share with you the front flower beds at our cottage, since they are looking so much nicer than in the spring. And now that they are completely covered in newspaper and mulch - both sides at once, which is a big deal around here - I'm really happy with how they look right now.

It's also the first year to see them with our newly painted yellow house as a background. I'm not sure if the photos do justice to how the greens, blues, and purples just pop against the yellow background. The previous gray did not do them justice. 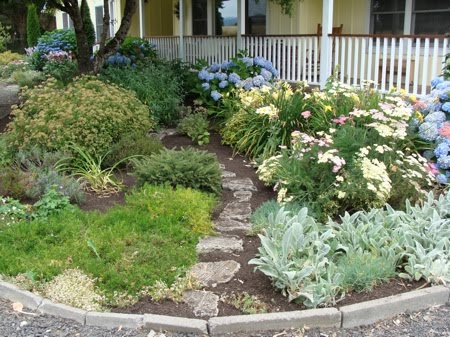 This is the part of the bed on the far right of the cottage- where the original driveway used to be. I do not like driveways that are left in front of remodeled garages, so Brian rented a jackhammer and broke up all the concrete one rainy winter day.

Some of the concrete pieces became the path you see above and more are lining beds around the house and in the vegetable garden. We still have some to use as edging.

Poor Brian. There was a lot of concrete. 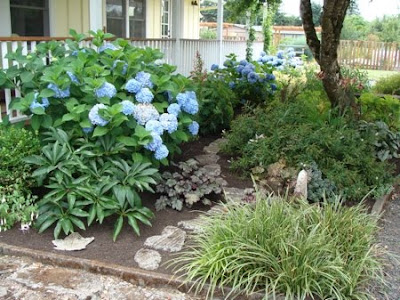 This is the where the path leads if we started from the previous picture. It's what you see on the right side of the door when coming to our house.

When we moved here, there was the Japanese maple, a small dogwood tree we sadly had to cut down to be able to get to the door, a bunch of nasty violets, and LOTS of landscape fabric and bark dust.

It's a challenge to find things that like to grow under the water-hogging maple, but my favorite plant that seems to love it is the Hebe to the right of the path right below the tree. It's like an airy small bush that blooms it's head off in August and September and is almost evergreen.

And of course you can tell I love hydrangeas. 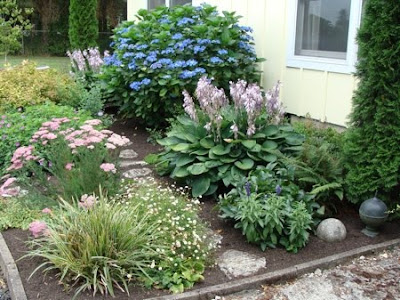 This is the bed to the left of the front walk. It also has a broken concrete path. Mainly I used the paths to take up room when I was figuring out how to fill these huge beds (we had to work with the existing circular drive and the placement of the maple, which left the front beds bigger than I really wanted...).

But the paths have come in handy for watering and cutting the plants back - I don't have to trample too many plants when there's a path.

The gigantic lacecap hydrangea was actually here when we moved in - but it was planted under one of the windows and within the first two years we were here it had grown enough to cover half the window.

We moved it one March to the center between the windows, thinking we were past deep freezes. Umm...no- I thought for sure we had killed it when we had temperatures down to the 20's. But this thing is so hardy, it bounced back and looked better than ever - though it did take two years. 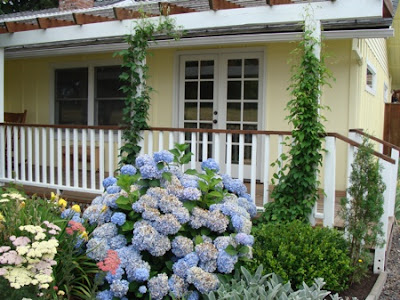 Since I showed you a picture of these two clematis in the spring that I hadn't had time to train up the posts, I thought I'd give you an update. I did end up wrapping the posts with some chicken wire because we had it and it took about five minutes to attach. It only looked dorky from the porch- you really couldn't tell from the road and I'm happy to report that the clematis covered it within a month.

They are budding and starting to bloom at the top, even with their late start, so I'm loving them! This is turning into one of the favorite parts of my garden.

Do you have parts of your garden that are making you happy this year?