I’ve started what I’m calling “The Great Asparagus Experiment of 2011.” It’s an attempt to be able to harvest asparagus more gradually instead of overdosing on it for a few weeks in the spring. Many years ago I read an article in The Oregonian by garden writer Vern Nelson about a way to get a three-season harvest from a large bed of asparagus.

And by many years, I mean 2003 (too long ago to be able to link to, unfortunately, though you can find a list of his articles from the last few years here). I’ve kept it in my files ever since because I hoped I would have enough room for an asparagus patch one day- which I am blessed to have at our current house.

After planting the bed and harvesting only small amounts for a few years, we were able to harvest for a full 6 weeks last year. And about the middle of June after we’d eaten so much asparagus we were ready for the harvest to end, I remembered this article.

Wouldn’t it be nice to enjoy asparagus periodically over a longer period than to have a glut of it that invariably gets old? 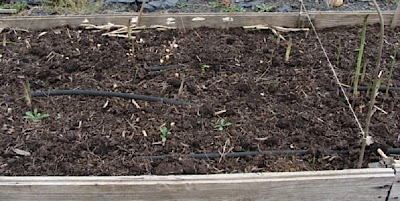 So, basically what I did this year was to separate my two long asparagus beds into three sections. This is the first section which I am harvesting now- that’s why you can’t see very many asparagus shoots. I will harvest this section like normal and then let the ferns grow at the end of June. 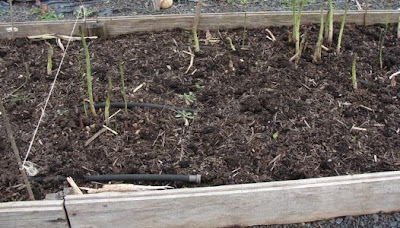 In the second section I am letting the shoots grow now and will cut the mature ferns to the ground in the last week of June. According to Mr. Nelson, a flush of tender spears will appear in about a week and will continue for six to eight weeks of harvest. 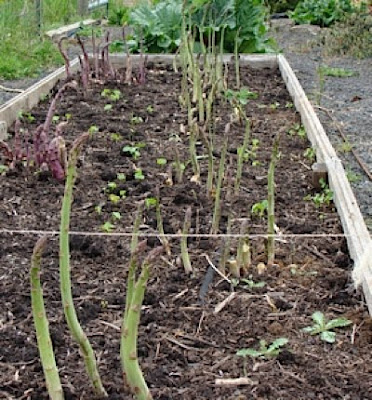 During this time the last section will be left to grow until mid-August. Then I will cut the ferns just below ground level and will be able to harvest new shoots about a week later. I should be able to harvest for about 6 weeks, stopping when the spears become “smaller than a pencil.”

Do I think this will work?

To some extent, yes. I think someone mentioned this at one of the TGP’s last year, or at least getting a spring and fall harvest from asparagus. But what the asparagus will be like, how long I’ll actually be able to harvest from each section, and if it affects next year’s production- these are all things I don’t now about.

And curiously, there’s not much information about getting multiple harvests from a bed of asparagus. I found an article about a two season harvest, but nothing about getting three seasons of harvest. And even though it’s just Brian and I who like asparagus, I worry about not having enough to harvest for meals.