Making a wool pom-pom wreath is a super-fun DIY project that results in a wreath that can be used again and again (see the update at the end of the post!) and even makes a great transition piece into January winter decor. The garland is so cute, too, and takes less time - you'll find yourself using it all over the house! 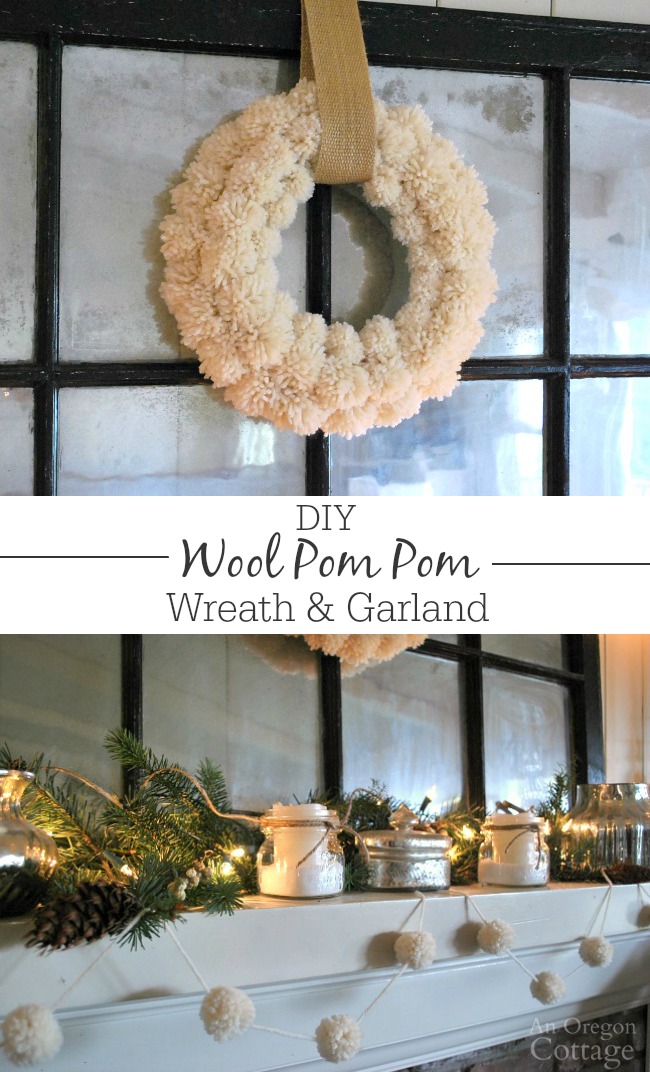 When I shared our silver, white & burlap Christmas mantel, I promised to show you how to make your own wool pom pom wreath and garland for a fraction of the price of the store-bought versions- and while I mentioned that they do take some time to make all the pom poms, I didn't tell you how FUN they are to make! I mean, they're pom poms. Don't pom poms just seem fun? My daughter and I sat down to watch a holiday movie and just cranked them out. It probably helps that they are so cute, too.

So, I'm sharing complete step-by-step instructions to make the wreath and garland (see the Anthropologie inspiration pieces here), plus how to create your own easy, practically free, pom pom maker which is WAAAAY better than a fork - you can really produce a lot with this easily! Then you can continue to make custom pom poms in any color, material, and size you want, like these colorful pom pom 'flowers.'

How to Make a Wool Pom Pom Wreath & Garland 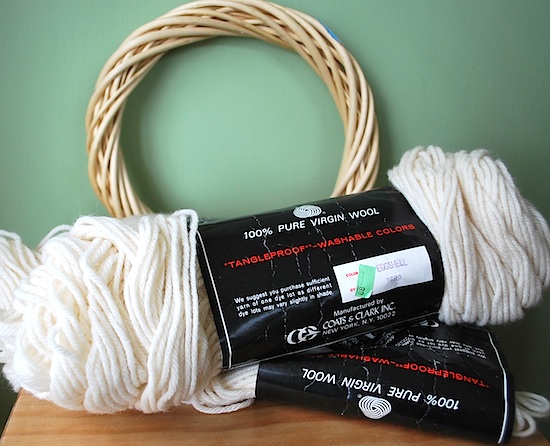 Here's what started with: two .99 thrift store skeins of creamy wool and a wreath form for .49. So just for fun, let's do the math: I paid $2.49 at the thrift store and a few more cents for some cotton yarn to wrap the form in which brings the total to something under $3.00. The higher-end store version? The wreath and garland would sell for a total of $166.00 (plus shipping) - crazy, right?

Want to save big bucks, too? All it takes (after your few dollars) is time making a lot of pom poms - first for the wreath, and then for the garland. It does take a few hours, so find a movie (or two) you'd like to watch and maybe even a friend to enlist (or a daughter, like I did!) to help and before you know it you'll be gazing at your high-end wreath you made for pennies.

(affiliate links included below for your convenience) 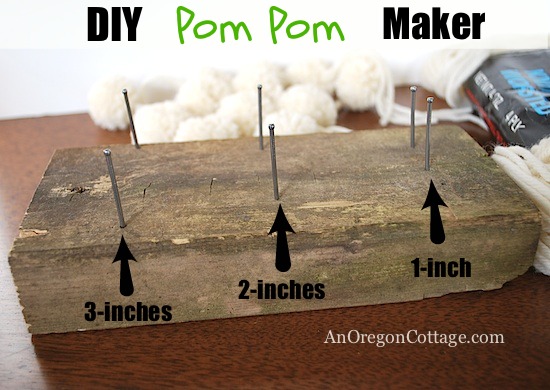 Yep, I pull out all the stops here. You can make one, too (I know you want to) by simply hammering six long headless nails into a scrap piece of wood about 8 inches long. Make two of them 3-inches apart on one end, the next two 2-inches apart hammered about the middle of the board, and the last two 1-inch apart on the other end.

Whew. That was hard. Better go take a coffee break.

If you don't want to DIY your own (hard to believe...), though, you can also use thick cardboard cut into 1,2, & 3-inch pieces to wrap the yarn around if you don't have scrap wood and nails hanging around. The reason I like the wood-nail version is because I find it easier to get the pom poms to be similar sizes (the nails are only so long...) and the cardboard ends up bending after a few uses. 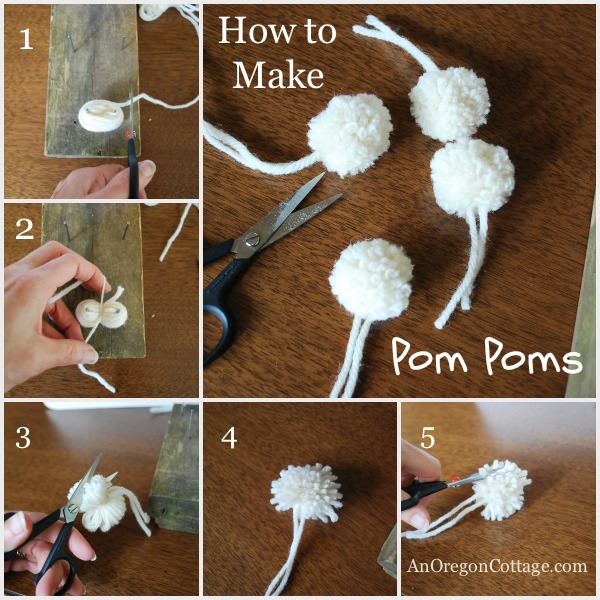 You might have made pom poms as a kid (they come and go in popularity...), and they are pretty simple:

There you go - now just make a lot. And then make some more because it won't be enough (and I'm not joking...). 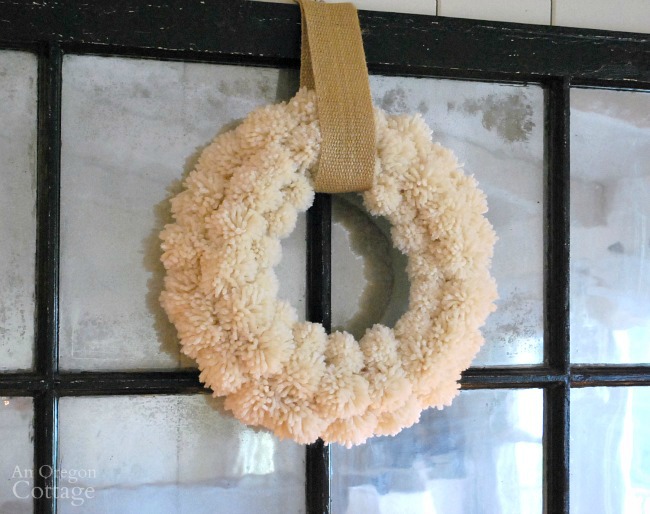 After looking closely at the Anthro wreath, it seemed they used different sized pom poms, so I used three different sizes on the wreath: 3-inch poms on the outside of the form, 2-inch poms on top, and the smallest 1-inch size on the inside (which you probably already figured out from the pom pom maker, but clarification is good, right?).

Note: You may want to trim your pom poms into more rounded shapes after they are all attached, as well, depending on the look you're going for. After I finished the outside and part of the center rows, my daughter mentioned that it looked like a shag rug. NOT the look I was going for. A bit of trimming to better see the pom pom shape and I was loving it again. 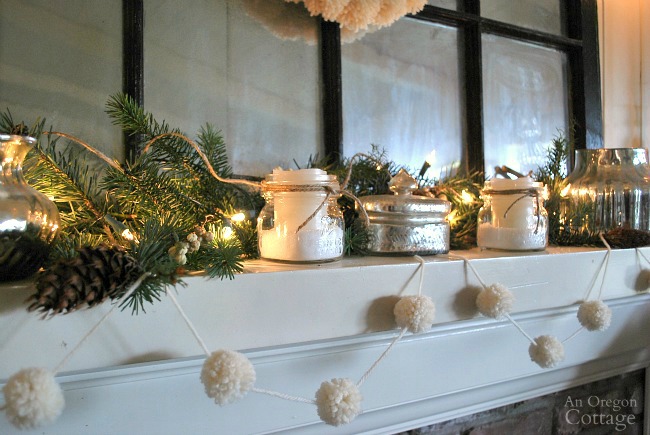 I used all small, 1-inch pom poms for the garland, though alternating with all three sizes would be a fun look, too. I sized it to fit my mantel which ended up being a 6-ft length - the exact size of the Anthro version. But of course when you do it yourself you can customize it to any length you'd like. 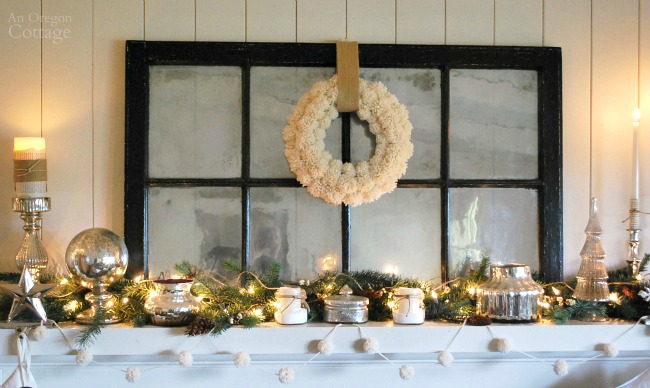 I really am enjoying this fun pom pom look and how it's different from the normal wreath and garland. What do you think? Did you see the Anthropologie wreath, too, and like it? Think you'll make these, too?

This tutorial was originally published in December of 2012 and remains one of my favorite holiday crafts ever! I LOVE this wreath in particular and have used it every year since publishing this tutorial. To give you an idea of how versatile it is - and how it looks just as good years later as it did the first year - here are some pictures of how it has been featured in our Christmas decor through the years: 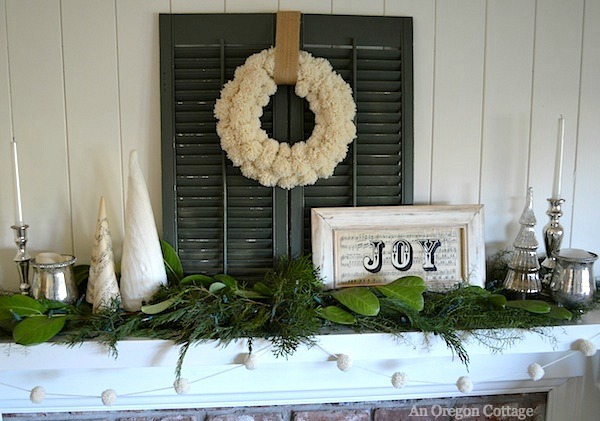 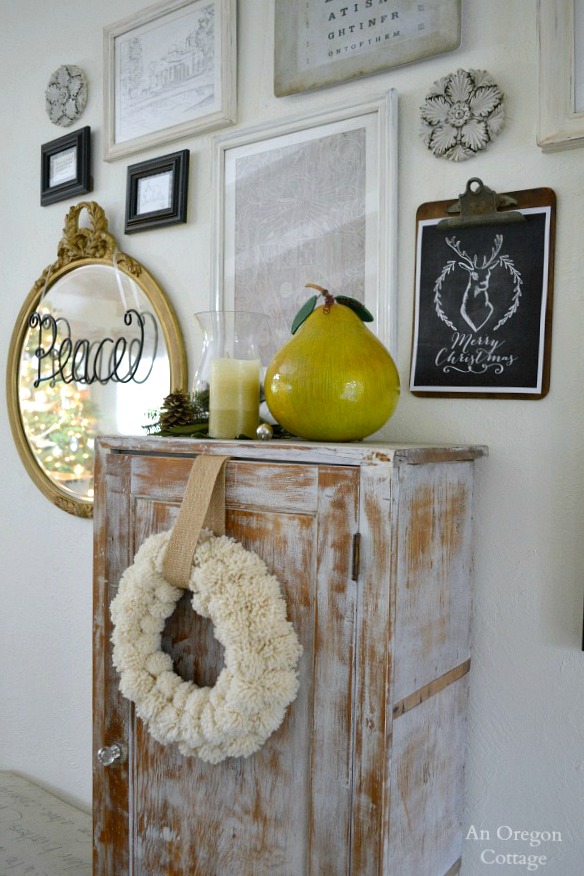 2014- The wreath moved to the door of a rustic cabinet in our entry. 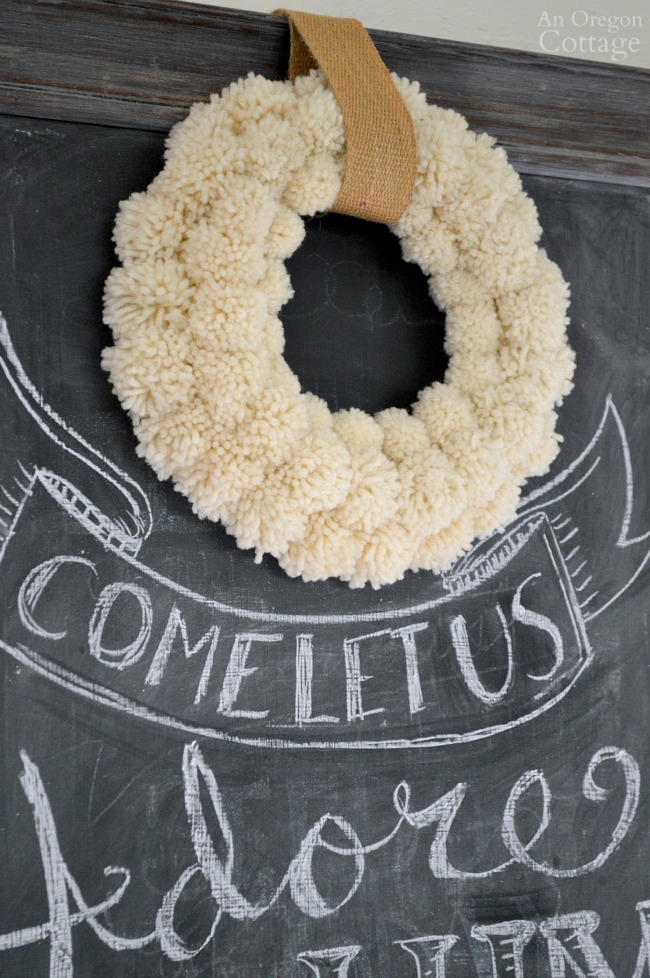 2015 - The wreath held a place of honor on our Christmas chalkboard.