A tutorial for the time-honored tradition of safely drying tomatoes and storing in olive oil at room temperature without canning. It's a great way to preserve tomatoes to use in any recipe calling for dried tomatoes. 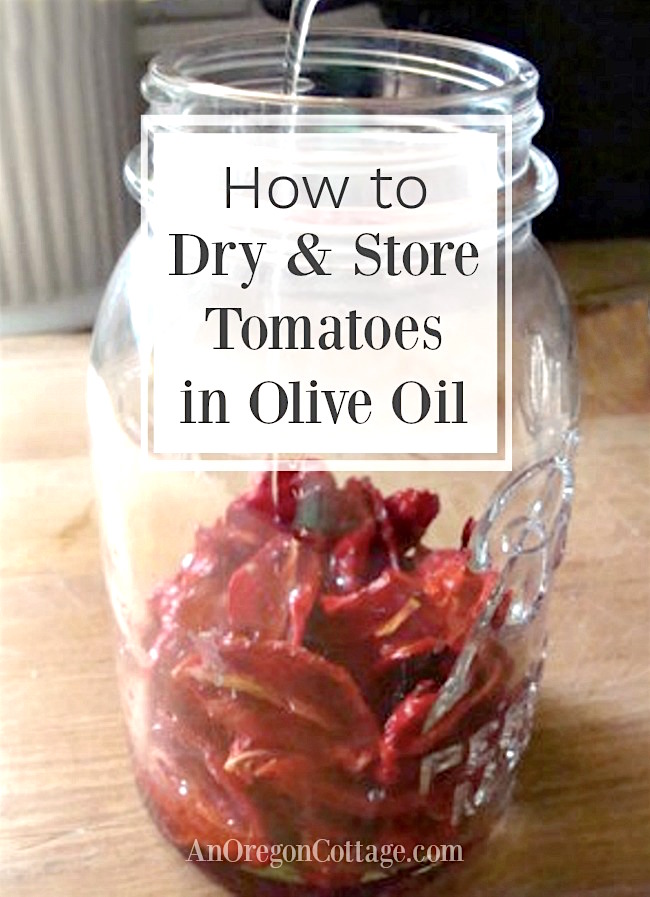 Read through this tutorial and then also check out the Drying Tomatoes & Storing in Olive Oil video we made for more visuals and details. (Affiliate links included where appropriate for you convenience.)

IMPORTANT NOTE: This is NOT a tutorial for canning tomatoes in oil, since there is NO way to do that at home safely. I am not recommending that. Removing all the air from the covered tomatoes would create an environment for botulism to grow (low acid + no oxygen). This simply shows how you can cover completely dried tomatoes with oil (and NO other ingredients), screw a lid on and store at room temperature.

This tutorial for drying tomatoes and storing on the shelf in oil is how I've preserved and kept my dried tomatoes for years. You'll find them in a vintage canning jar covered in olive oil and sitting in a cabinet in my kitchen. They are SO much easier to use this way, versus simply dried and packaged: you can cut them up immediately to use in Italian pastas, over salads, and in dips - all without needing to rehydrate first in water.

I learned of this technique by reading a well-known local food preservationist writer, Jan Roberts-Dominguez in the Oregonian newspaper in the 1990's. I actually taught myself to can using some of her articles and many of her recipes are my favorites even now. She always used recommended USDA guidelines and her preservation recipes were tested and approved. Once I started using her technique for drying tomatoes and storing them in oil, I never looked back. It's a huge money-saver as well as a great item to have on hand for recipes.

But, here's a note on safety: Many of you know I'm big on food safety, and I don't do things based on the "I've done it for years and it's never killed anyone" train of thought. However, this particular preserving method is a time-honored technique that has stood the test of time for two reasons:

As an added precaution, I also use Ms. Dominguez's recommendation to dip them in red wine vinegar to help extend their shelf life which increases the acidity as well.

However in 2010 I came across a newsletter that said the National Center For Home Food Preservation was no longer recommending storing dried tomatoes in olive oil. Why?

"Preserving tomatoes in oil is currently not recommended. Oil may protect botulism organisms trapped in a water droplet. Furthermore, oil may have a deleterious effect on lid gaskets and the at least one manufacturer of home canning lids recommends against it."

You can imagine I was NOT happy with this. Especially since:

But mostly I wasn't happy with this because when I tried to research this new recommendation, I wasn't able to find any other site or research to back up this claim.

So I emailed Ms. Dominguez (hey, I'm a fan...) and asked if she had heard this and what her thoughts were. She had not and basically said that if the tomatoes are truly dry and not packed with any fresh herbs or garlic there should be no problem. The vinegar dip she recommends also helps tip the acidity level.

9/3/11 Update: I found this information that mirrored my own from the book, How to Store Your Home-Grown Produce: Canning, Pickling, Jamming, and So Much More by John and Val Harrison:

For years we stored in oil by simply placing the produce in a sterilized jar and filling the jar with oil, agitating to get any air bubbles out before sealing...when we published this on our website we were deluged with emails warning that we could get botulism from this…

When we researched this...we discovered that it was first mentioned on a Canadian website in reference to an outbreak of botulism from a restaurant...this was picked up and repeated...until it became a fact as far as casual searchers were concerned.

(We) decided to consult a food scientist directly. He explained that there was a theoretical risk that small droplets of water adhering to the vegetable would provide a growing medium for botulism. He couldn't quantify the risk, not being a statistician, but comparisons with being struck by a meteor...were mentioned. He wouldn't go on record as saying it was safe, although he said he would have no concerns personally about using the method.

The authors go on to say that they tired of the endless arguing on their site, so they now only recommend a "hot oil" method (whereby you heat the oil to 140 degrees before pouring it on the tomatoes and sealing), though there is some loss of flavor.

While I am glad that I haven't gotten the "endless arguing" on AOC and am still able to recommend drying tomatoes and storing in oil, since it's what I do - I do want to make sure that you are able to make an informed decision for yourself. You may heat your oil - or not - as you use your own common sense and experiences.

9/5/17 Update: The Oregon State Extension Service lists this as a safe way to store tomatoes!

Because of their acidity, unseasoned (i.e., no vegetables or herbs) fully dried tomatoes may be safely stored in oil at room temperature. (Refrigeration may delay rancidity, however). The tomatoes will soften more if quickly dipped in bottled lemon or lime juice before being placed in the oil. The tomatoes can be flavored with dried herbs and garlic. NOTE: Dried tomatoes-in-oil mixtures with [fresh] garlic and/or herbs MUST be refrigerated and used within 4 days or frozen for long-term storage.

As for me, I'm glad to know I can feel good about continuing to store my dried tomatoes this way. And let me tell you- these are sooo easy and tasty and a fraction of the cost of store-bought, I'm pretty sure you will want to, too.

Not that I'm trying to sway you or anything.

1. Wash tomatoes, cut the top core off and cut them in half. Remove as much of the seeds as you can by running your thumb down the insides. It sounds tedious, but goes rather quickly. TIP: I use an over-the-sink cutting board with a cut-out that makes it easy to cut and scrape the pulp right into a bowl set below the board. 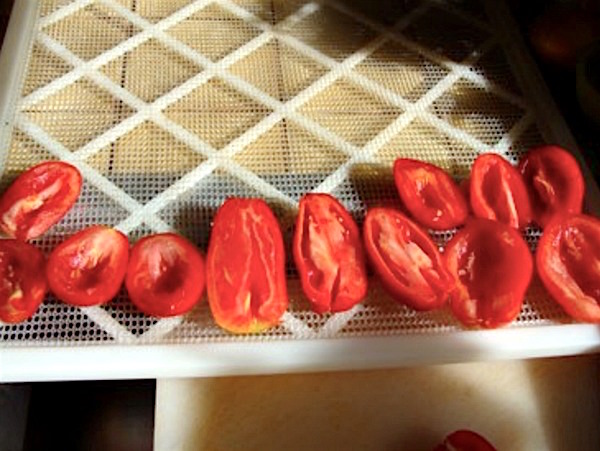 2. Line the tomato halves on a dehydrator tray, cut side up. This is important, otherwise you'll get a lot more juice run-off as they dry and the cut side sticks to the tray, making them harder to turn. As you can see, I really pack them in there because they shrink as they dry.

3. Dry at the manufacturer's recommended 135 degrees. (I love and use a 5-tray Excalibur Food Dehydrator.) Leave them for about four hours and then do the first switch: turn them over and turn the trays around. None are usually dry yet, except maybe a few really small ones. Let dry for another 1-2 hours before checking again. At this point, there will be some dry tomatoes and you'll need to remove these (I set them in a large bowl or baggie) and continue drying the rest.

Cook tomato halves in a 170-degree oven for about 3 hours with the oven door left open about 3 inches for moisture to escape. Then turn the tomatoes over, cut side down, and press flat with a spatula. Continue baking, turning the tomatoes every few hours, gently pressing down, until the tomatoes are dried, up to 9 hours more. Check often since some tomatoes will be done quicker depending on the size and moisture content. Aim for a leathery feel that will bend but is not crisp, and no moisture appears when pressed all over with your fingers.

What does a fully dried tomato look and feel like?

(for a better visual of this, you can check out the video we made on this process) 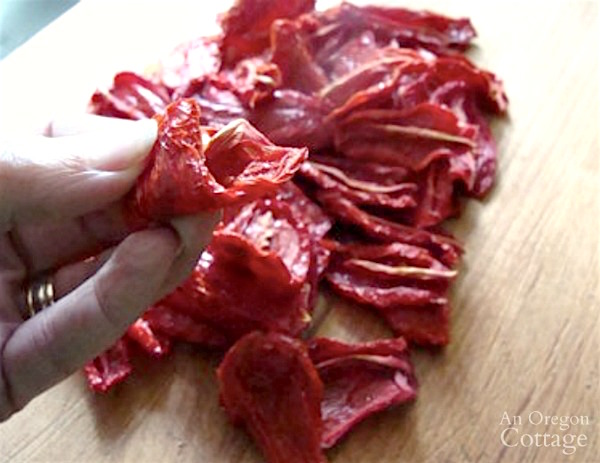 Your fully dried tomato halves should be dry and leathery with no moisture coming out from them when you push them with your fingers. You should be able to bend them like shown in the picture above.

If some get a bit crisp in places, it's OK, but don't let them all get that way- there's no amount of oil that will soften them up again. (TIP: if some get too crisp, you can whir them up in a food processor or blender to make tomato powder which makes great tomato paste with a bit of water added!)

As you continue drying tomatoes, you can start putting the fully dried halves in a jar, starting with a vinegar rinse: 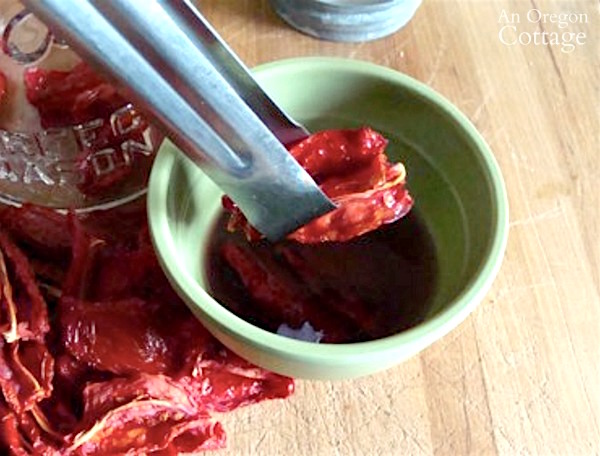 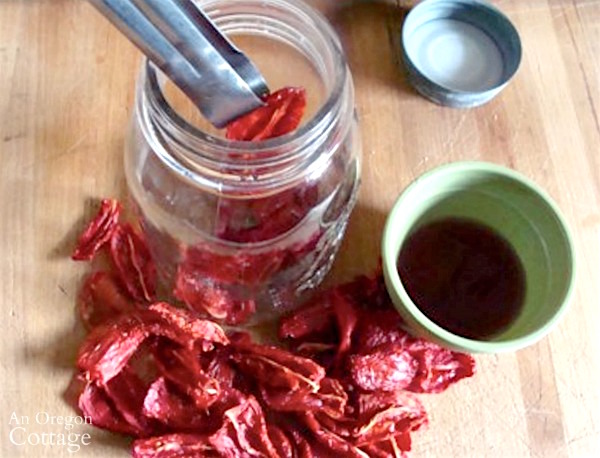 5. Continue dipping the dried tomatoes in vinegar, letting them drip and placing in the jar until the jar is full to the shoulders of the jar. It's okay to press down on the tomatoes to remove air and fit more into the jar. 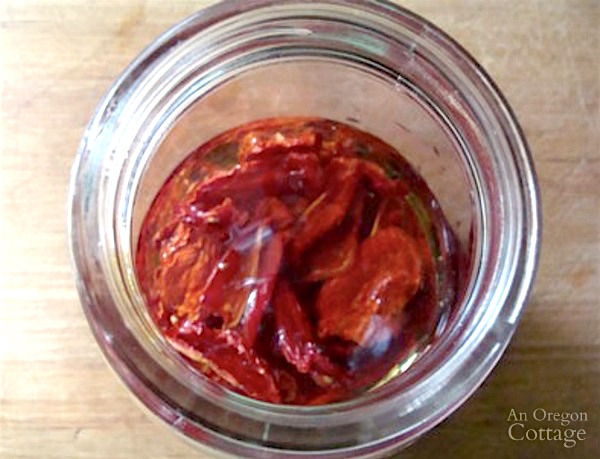 6. Add olive oil to the jar until the tomatoes are covered. You will need quite a bit of oil, but you will be able to use the oil for salad dressings and cooking as you use up the tomatoes. No waste here! Tip: Amazon has good prices on olive oil here.

KEY for storage and safety:

Make sure the tomatoes are completely covered in olive oil.

7. Continue drying tomatoes, dipping, and covering with oil. When the next bunch of tomatoes are dry, just continue to "dip and drip" each one in the vinegar and place in the jar, covering the new additions with more olive oil.

8. When the jar is full, store it in a dark, cool place. As you use the tomatoes, just be sure the remaining tomatoes are fully covered before storing back on the shelf (you can add more oil if needed).

Hopefully where you can reach it easily, because you will be using these a lot!

Here are some recipe ideas to use your dried tomatoes: 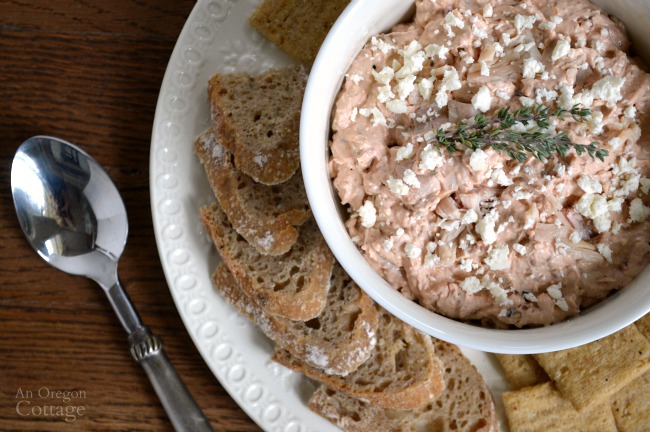 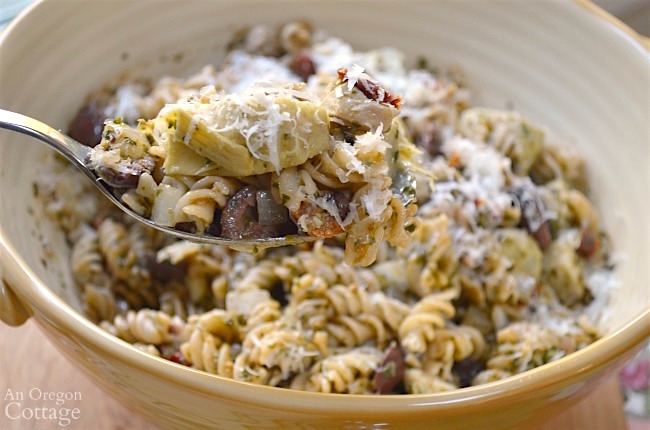 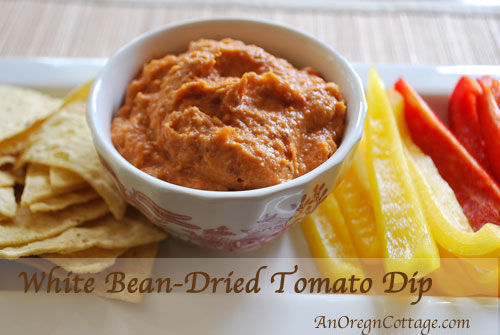 Note: this article was originally published in 2010 and has been updated with larger photos, clearer formatting, and updated information.

Disclosure: affiliate links in this post will earn commission based on sales, but it doesn't change your price. Click here to read my full disclaimer and advertising disclosure.