Five reasons why you should grow cucumbers up on a trellis no matter how big your garden is for the best results. Follow this simple tutorial on how to grow them vertically for your best crop yet! 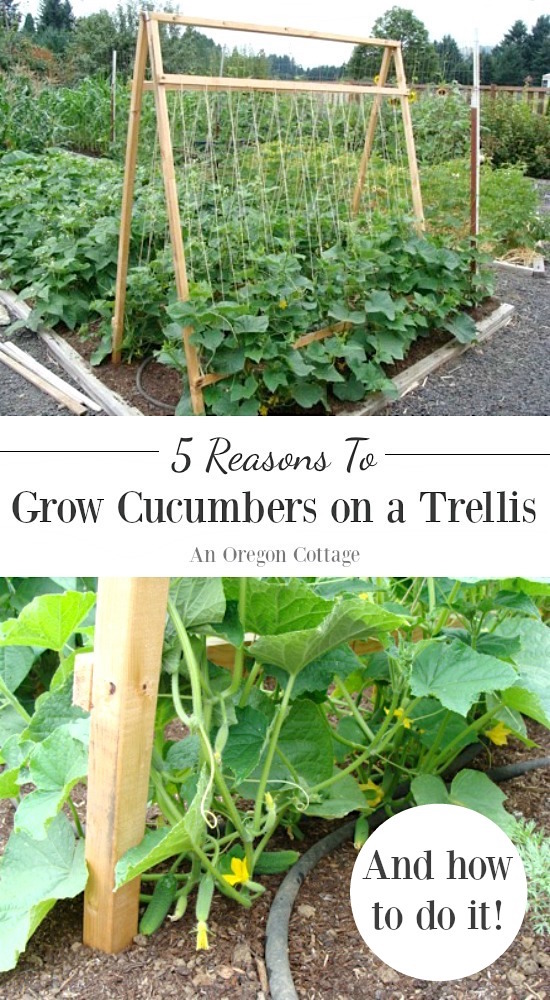 Do you grow cucumbers on a trellis or let them sprawl on the ground? I’ve always grown them on a trellis because I didn’t want them taking up too much room. But over the years I’ve discovered that there are a lot of other benefits to growing cucumbers vertically even if you do have lots of room in your garden and are not trying to “Square Foot Garden” or save space.

I think you’ll agree with me, so after I share why to grow cucumbers up instead of out, I’m also explaining exactly how to do it, since you’ll need to do a few things differently. It’s worth learning a few new techniques – I promise. 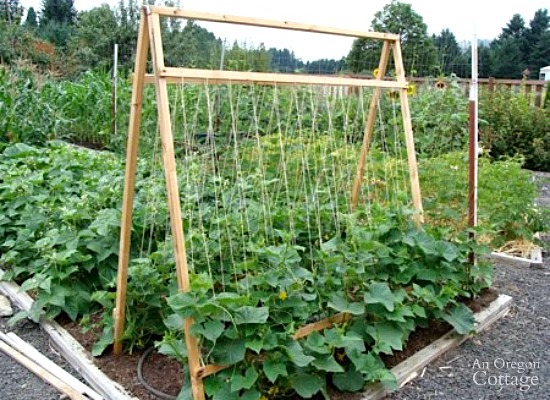 Five Reasons to Grow Cucumbers on A Trellis

All this is in addition to the smaller footprint needed to grow a large number of cucumbers!

Are you convinced? I thought so. While cucumbers are easy to grow vertically, there are just three things you’ll need to do differently to grow cucumbers up instead of out.

How to Grow Cucumbers Vertically

I’ve found that an A-Frame trellis made out of 1″ x 2″ boards (like the one pictured above that Brian made for me this year- it folds down for easy storage!) or bamboo poles work the best.

They can be grown up a single trellis (meaning a trellis between two posts vs. the A-frame), but it will need to be secured more than normal to be ready for the full-sized plants loaded with fruit.

Update: The wood trellis pictured lasted about 4 seasons before the legs rotted out. I have since found 10-ft U-shaped rebar that we fashioned an a-frame trellis from so they won’t rot at the legs.

Update #2: The rebar trellis isn’t good use of space in our smaller farmhouse raised bed garden, so I’m now growing them up a hog/cattle panel.

Update #3: Here’s a wood trellis DIY I found similar to ours, but using thicker wood so it may last longer than ours: A-Frame Trellis Tutorial.

I’ve added photos of both of these trellis options at the end! 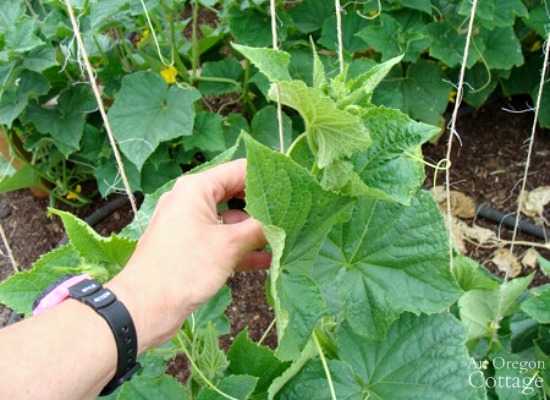 2. Train the plants up the string (or fencing, or whatever you use) during the growing season.

This is not difficult- it takes about five minutes as you’re working or harvesting in the garden. Just wind the plants around the string one or two times and they will take it from there.

Oh, and don’t you love the watch? It’s my super stylish dollar-store watch that helps keep me on task in the garden. I’m known for losing track of time out there. I’ll go out to do a few things at 11:00 am and before I know it, it’s 2:00 pm, and I’m thinking: “No wonder my stomach was growling…” Which, come to think of it, is much better than Brian coming out to ask me, “Didn’t you have a dentist appointment?” Ugh. Definitely. Need. The. Watch. 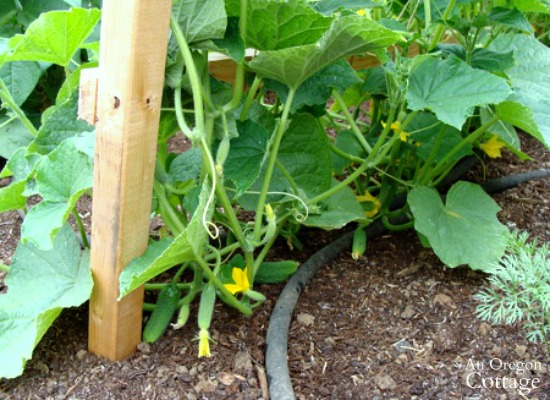 3. Water from the bottom.

While trellising and training are really the only things you have to do, I think using a soaker hose is a really smart idea (but I think that for a an entire easy care garden, too). It waters right where you need it, doesn’t get water on the leaves (wet leaves contribute to diseases like mildew), and waters deeply.

I turn the hose on for about 2-1/2 hours once a week (every 5 days if it’s really hot) and the plants are growing great. If you live in a hotter climate, you can add some type of mulch to the soil to help keep the moisture in. 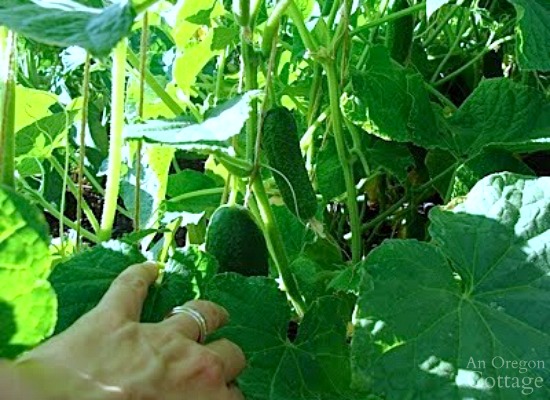 The very first cucumbers grown on a trellis will appear at the bottom (like the photo in #3 above), and may be a bit dirty, but once the plants have grown up the trellis a bit more, you will just be able pick just by reaching in, push the leaves aside and grab a perfect, mostly straight fully colored cucumber! 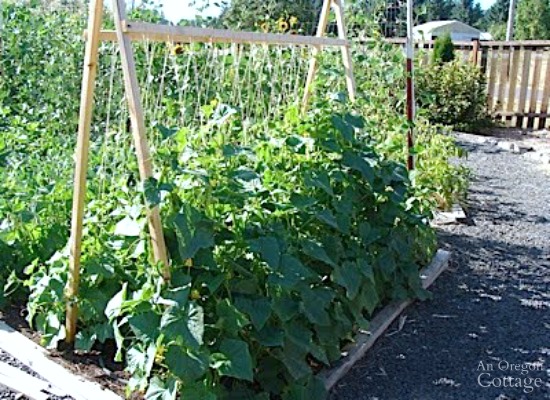 And as they grow taller (the photo above is two weeks later than the picture at the beginning of the post) you might not even have to stoop to pick the fruit!

Although it is really nice that they do take up less space, too.

You will be able to plant the cucumber seeds closer together (I plant about 2 inches apart and then thin to 5-6 inches apart) because you are training the vines up. This of course means you will have a much larger harvest in a smaller space than letting them sprawl on the ground.

But that probably goes without saying, because that’s why we like to grow vegetables vertically. And even though it’s not a part of the “official” 5 reasons to grow cucumbers on a trellis, it’s a pretty good one still, right?

Can you tell I really like growing cucumbers this way?

Do you grow cucumbers on a trellis? Why or why not? 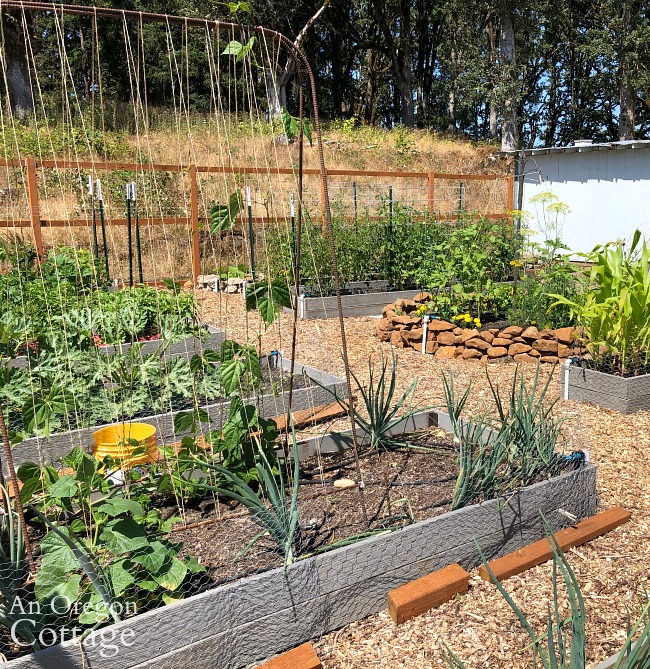 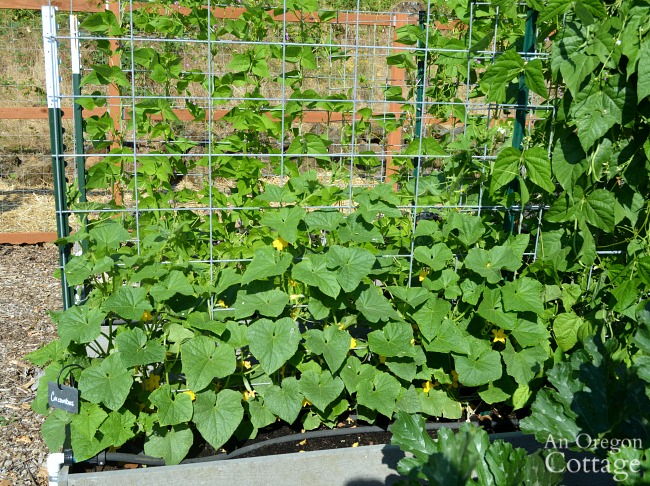 This article has been updated – it was originally published in August of 2011.