Naturally gluten free, this recipe for buckwheat pancakes is made with healthy buckwheat flour as well as oats, maple and cinnamon. They are SO good you'll never miss the flour! With a couple of simple tricks to keep them light and fluffy and these may become your go-to pancake.

Some links in this article are affiliate links and if you click on them and purchase I will receive a small commission at no cost to you.

Have you ever cooked with buckwheat?

I started adding it to our biscuits years ago when I read how good for you it was and I really liked the nutty flavor it added.

Since then have tried to find other ways to use it in recipes, including adding buckwheat groats to my favorite granola recipe.

When decided to try a pancake recipe that also had oats, flavored with maple and cinnamon pancakes, they were so good that they make regular appearances on our family's Saturday breakfast menu.

Even though it's referred to as a grain, buckwheat flour is actually made from the seed of a plant related to rhubarb? This makes it naturally gluten and grain free.

Pro Tip: If it's important that they be gluten free, be sure to look at the ingredients in a package of soba noodles - many are made with wheat flour in addition to buckwheat.

Like the author of this article, I've always been surprised that there aren't more recipes using buckwheat with the popularity of gluten and grain-free diets.

While buckwheat does have what's referred to as an 'assertive' or 'nutty' flavor, it's not that different from whole wheat, really, and adding other ingredients tempers any strong flavor (though for the record, I love the flavor buckwheat brings).

Let's reap all the rewards of buckwheat flour with these delicious pancakes!

A while ago I made pancake mixes in mason jars for Christmas gifts and included a buckwheat version for our gluten free family members (I use this buckwheat flour from Bob's Red Mill).

Both of these mixes became our favorite pancake recipes for weekend breakfasts - especially the buckwheat version, even though no one in our family is gluten free - they're that good.

Since we enjoy them regularly, I adapted the ingredients to read as a regular recipe (instead of a gift-jar label) that makes about 10 pancakes whenever you want.

Of course once you try them, I'm confident you will want to package it up in a jar and gift it to anyone you know who would appreciate it!

There are a couple of tips to making these pancakes turn out light and fluffy:

The first is to grind the whole oats just a bit.

You don't want oat flour - just process for a few pulses to get a coarse grind. Another option is to use quick oats that have already been ground some.

The second is to separate the egg and whisk the egg white until fluffy.

This isn't a big deal - just use a hand whisk, rubbing back and forth quickly with both hands and in a few seconds to a minute your egg whites will turn fluffy and have a soft peak.

Mix the dry ingredients, add the wet and then gently fold in the whipped egg white.

Cook as normal in coconut oil or butter (though butter will result in an even browner pancake).

Topped with more maple syrup, butter - or even a nut butter to increase the protein content - you will never guess how good for you these pancakes are.

What is the difference between buckwheat and regular pancakes?

When using buckwheat flour, your pancakes will be darker (just like the flour) and will have a nuttier taste - and they will contain more protein, vitamins and minerals.

Is buckwheat good for you?

Yes - some go so far as to call it a superfood! Buckwheat is high in antioxidants, fiber (4x as much as regular flour!) and can help control blood sugar levels with nutrients like proteins (it's a complete protein) and flavonoids.
And for those who need to be gluten free, buckwheat is higher in vitamins and minerals, as well as fiber, than all the rice products you can find. (source)

Can you make these into buckwheat waffles?

Yes, you should be able to make these into waffles. The pancake batter is pretty thin, so I'd try adding another tablespoon or so of buckwheat flour so it fills the waffle maker better.
To cook into waffles: Heat the waffle iron until it is hot. Grease well with oil and pour the batter in the center of the waffle maker. Cook according to waffle maker instructions, about 4-5 minutes.

These were delicious...My children were instantly grumpy when I told them that I was trying a different recipe for pancakes this week, since they liked the old recipe. But when they tasted them, they stopped complaining. 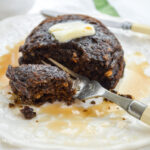 To Make Buckwheat Waffles: The pancake batter is pretty thin, so try adding another tablespoon or so of buckwheat flour so it fills the waffle maker better.
To cook: Heat the waffle iron until it is hot. Grease well with oil and pour the batter (about 1/3 cup or according to your maker) in the center of the waffle maker. Cook according to waffle maker instructions, about 4-5 minutes. Make Ahead Tip: These freeze great! Cool the pancakes and freeze flat before adding to a freezer container and freeze. Heat in a toaster oven from frozen for quick weekday breakfasts. 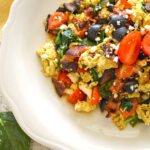 Mediterranean Egg Scramble with Spinach & Bacon
A fresh and delicious version of a classic mediterranean egg scramble made with spinach, bacon, tomatoes, olives and feta cheese.
Click For Recipe 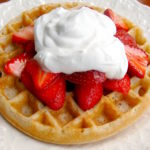 Amazing Sourdough Waffles Recipe
Light and fluffy whole grain sourdough waffles are easy to make and blow away regular waffles with their flavor. It's a great way to use up your starter, too.
Click For Recipe 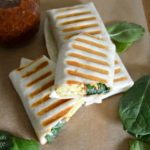 Freezer Mediterranean Breakfast Wraps
A Mediterranean flavored breakfast wrap to eat now or freeze for a quick hot breakfast - or lunch - whenever you want.
Click For Recipe 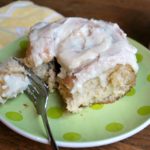 The Best Cinnamon Rolls- period.
My gift to you: the best cinnamon rolls recipe you'll ever have (according to all who've eaten them).
Click For Recipe

Disclosure: Affiliate links in this article will earn commission based on sales, but doesn't change your price. Click here to read my full disclaimer and advertising disclosure.