A monthly list of good things to do, buy, read, watch, and more. 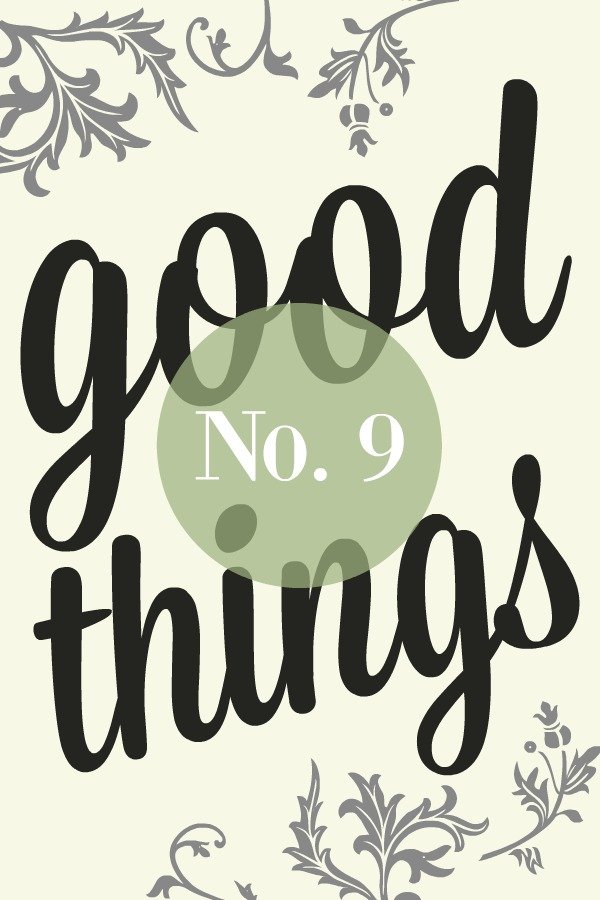 Oh my gosh, is it just me or does October basically mean the holidays are right around the corner? Uh, let's not think about that right now, though, k? We'll just enjoy the changing leaves and how the winds blows them down through roads and yards. More clouds, cooler weather, and sun peaking through (true story: Brian called me over to the window the other day to show me the fake-looking sun ray shooting through the clouds to land on a hillside. We both decided that we'd have laughed if we'd seen that in a painting - it just didn't seem real!).

We're still working on getting the outside of the farmhouse fixer buttoned up for the winter - and now trying to find a builder to work on the addition that we finally got the permit for (our current builder can't do it, sadly). We've gotten some landscaping done that is part of the foundation permit, which included us renting a small backhoe and unearthing gigantic boulders, plus LOTS of rocks (we'll be talking about this on an upcoming AOC Podcast, so make sure to subscribe and tune in!).

This month's good things list includes an early fall tradition Brian and I look forward to, a new seasonal home scent I'm in LOVE with, how I'm listening to books while doing all the landscaping work, a cookbook that would make a great gift, and the books and movies I've read and watched. Don't forget - I want to know your good things, too! 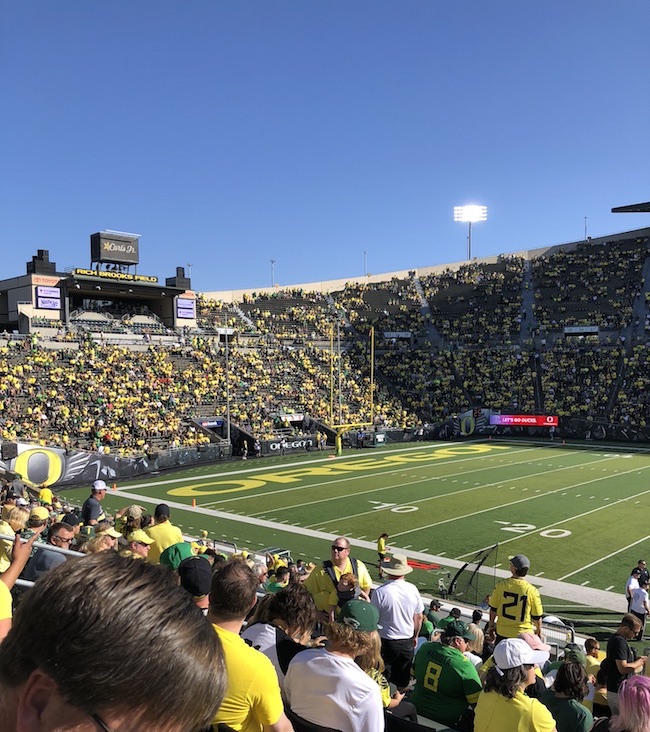 A fall tradition Brian and I have come to look forward to is attending the first or second game of the football season at our alma mater, the University of Oregon. It's hard to justify buying expensive Duck tickets (cough *farmhouse* cough), but getting to one of the first few games where they plan non-conference teams is the cheaper route we can splurge on.

The weather is usually great, the fans excited, and it's become a fun way to kick off the season for us - pun intended, lol. What about you, does football mean fall too? 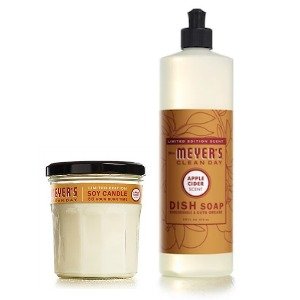 So, I'm not usually one who cares about the newest "seasonal scent" but I needed some soap and I saw this seasonal "Apple Cider" Mrs. Meyers scent available on Grove and ordered it. I grabbed a candle, too, since it was on sale. And oh my goodness, does this smell GOOD. I really - really - like this scent and maybe find myself pumping more soap than normal to get a whiff. It seems just about perfect for the fall season.

Who knew? I did see that the candle is already sold out at Grove - but do check at stores that may sell them. There is plenty of soap - both hand and dish - as well as all-purpose spray available, though, and if you're a new Grove customer you can get a $10 credit off a $20 order when you use this link. There's also a pumpkin scent, but I am all about the apple cider! 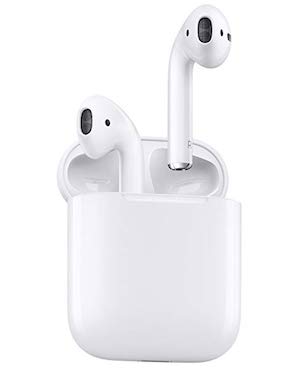 Apple's AirPods - if you're a podcast listener, then you know this item made it into the "cool things" segment. You guys, this is an item I totally scoffed at when they came out almost 2 years ago - $150 for a set of earbuds? Come on, get real!

But then I saw lots of people using them, I read how the case was a charger (the buds run 3 hours and you can recharge them in the case for up to 9 hours), and how they really don't fall out as easy as it looks. Then I was gifted some Amazon gift cards and cash for my birthday and decided to go ahead and use them to order a pair.

And I am in love with these things. They are actually kind of amazing. Obviously no cords is a bonus that you can get with any bluetooth set. What sets these apart is the fact that they KNOW when you take them out of your ear and STOP playing - really. You can be listening away, take one out when someone needs to say something to you, and it stops, but it back in and it starts up again like magic.

They're also super easy to pair with my phone as well as my computer, they are comfortable, sound great, and haven't ever come loose for me, let alone fall out. And I have spent hours listening to books while hauling wheelbarrows full of wood chips, rocks, and dirt, so I know what I'm talking about, lol. The one downside is that you can't adjust the volume on the buds - you have to use your phone (well, the directions say you can with Siri, but it never works for me...), though this hasn't really been an issue.

I love these so much, my daughter and I bought a pair for Brian for his birthday (and he's enamored, too). Are they worth the money? Probably not, really. But if you get some birthday money and you're wondering what really special thing you can get, definitely think about a set of AirPods! 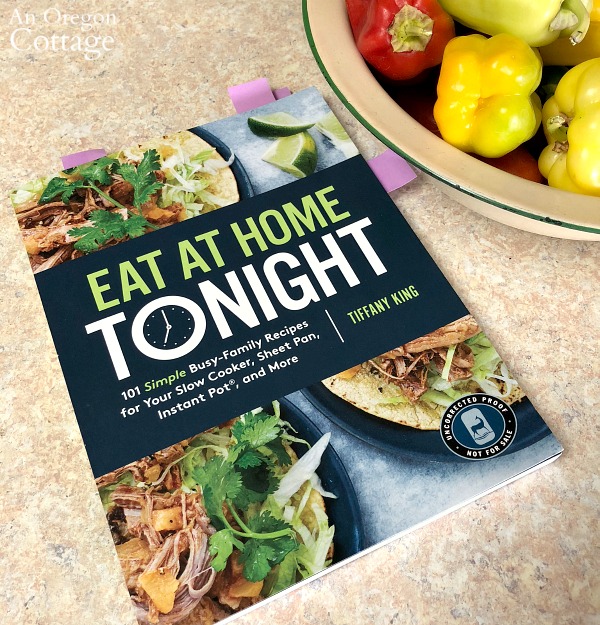 I am continuing to use the Eat At Home Tonight Cookbook that I got for being a part of the launch team in August. This really is the most useful cookbook I've seen in awhile (I'm not just saying that - I always tell you guys like it is). When I know I've got to get dinner on quick, I turn to the 15-minute meals, when I want a slow cooker meal, I turn to that section, and when I want to make extra, I look up the two meals from one section.

And I was thinking that this would make a really great gift for the holidays - or for anyone you know who wants to eat at home and could use some recipes and inspiration, so I thought I'd mention it again now that it's closer to the holidays. Go here to order on Amazon and check something off your list early!

Have you grabbed this book yet or used it?

Here are the best - you can see it was a classics kind of month:

Middlemarch, George Eliot. This is a book I'd never read, a college English class choosing Silas Mariner instead (I can't even remember what I thought of it - is that telling?). This is considered Eliot's masterpiece and is high up on lists of the best novels of all time. It is looooong. I listened to this while working outside, cleaning, and cooking and it took more than 35 hours! It's a very interesting look into the lives of early 19th century families living in a small town in the English countryside. It specifically looks into the loves and marriages of a few different couples, how social pressure and gossip shaped (and ruined) lives, and even a bit of politics and social changes of the time. I laughed in places - and gasped in places. This book holds up well 150+ years later and I now want to find the old PBS series to watch.

Jack: CS Lewis and His Times, George Sayer. After listening to many of CS Lewis's books and essays on Christianity, I found myself curious about his life. This biography is the one recommended by his stepson, Douglas Gresham, which seems to mean that it's true and honest. The author was a friend of Jack's and so there are many first hand experiences. He also used the many letters in the Lewis family trust to fill in the early years. After listening to Surprised By Joy and being shocked how Jack described his years at boarding school, this biography puts a gentler light on it, and explains how Jack probably exaggerated it. It also sheds light on his relationship with Mrs. Moore and that she seemed to fill the mother roll with Jack. If you are interested in his life at all, I do recommend this biography, too.

Cranford, Elizabeth Gaskell. I adored Gaskell's North and South which led me to download this book on the library app, Hoopla. While this was pleasant, it never grabbed me like North and South, and in fact at times I was a tad bored. It's a pretty small book, focusing on just a few women in the rural town of Cranford, England. They are older and do not have children. They do odd things and suppose lots of things (i.e., gossip) that aren't true. Thankfully the end brought a nice satisfying conclusion - and the book wasn't that long. 😉

The movie we saw this month in the theater was Crazy Rich Asians. When I first saw the trailer I was a little ho-hum about seeing it. Then we started hearing all the reviews and how good it was. After seeing it, Brian, our daughter and I all agree - it's a fun movie. It also has some deep things to think about like class and money and family.

I haven't read the book - and there are sequels - have you? Should I? 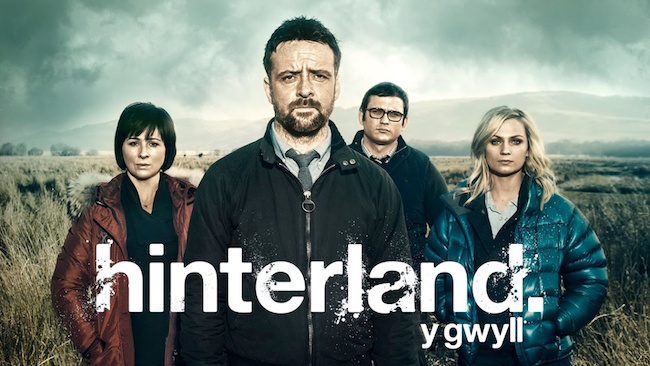 Hinterland, Netflix. Brian and I have been watching this off and on for the last few months. It's a BBC type crime procedural series set in Wales. The notable thing about this is that it's shot in English and Welsh at the same time, airing the English version to us and the Welsh version in Wales. It's super moody - mainly because of the landscape - and we really like the depth of the main characters. They don't let you know all the background all at once and part of the show is figuring out what the heck is going on with them, especially the lead inspector played by Richard Harrington. 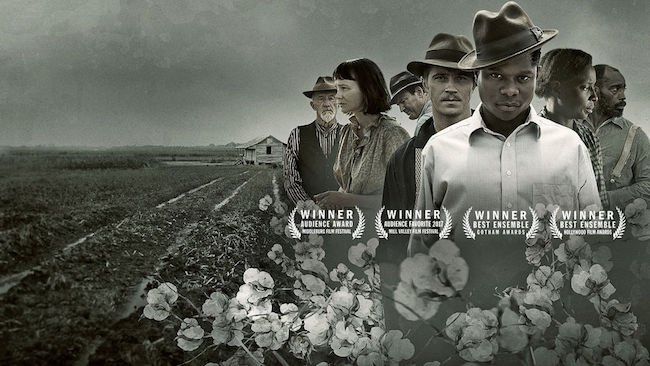 Mudbound, Netflix. I'm a sucker for historical stories and this Netflix original movie (based on the book I learned) looked interesting. And it is a good movie. But it is a hard movie. And sad. This issues of race in America vs. Europe for the black men who served in WWII was new to me - I didn't know it was so different. This is definitely a movie for adults (the hardest is seeing a KKK scene...), but it is important, I think, and it does end with redemption and joy. If you watched it, I'd love to know what you thought!

That's it for another addition of the Good Things List! If you'd like to see more of what I'm enjoying, you can check out all the Good Things Lists here. I'd love to know what you think - if you've tried any of these or what you'd recommend. Leave a comment below with your thoughts!