It's really easy to ripen tomatoes at the end of the season - no wrapping required. Use these tips for what to look for and 3 easy steps to make sure your tomatoes don't go to waste.

I've mentioned occasionally (usually writing about things like what to do with pounds of tomatoes) that I ripen tomatoes at the end of the season by harvesting and bringing them indoors, but I haven't ever written what I do, how to do it, and what to look for. I finally took some pictures for you as I went through this fall ritual a couple weekends ago because it's super easy and I reliably get tomatoes to ripen with these  simple steps.

You'll usually find me grabbing any tomatoes with ripening potential (more on that later) in October - hopefully late October or early November if it's been a mild fall - but some years I may have to harvest the green-ish tomatoes at the end of September. Here in the Willamette Valley of Oregon (zone 8) if we get rain off and on for a week or more at the end of the season, the tomatoes start to split and mold. Any time this happens or a heavy, cold rain was predicted, I fill baskets with any tomatoes I can salvage.

What about wrapping each tomato to ripen with newspaper?

As you may have figured out from reading AOC, I like to do things the easy way (freezing vegetables without blanching, designing a garden for easy maintenance, and super easy crafts to name a few). So in in the fall when I have tomatoes, peppers, zucchini, and corn coming out of my ears I would never have time to individually wrap each tomato like I read about here.

For example, I had more than a 5-gallon bucket full of green tomatoes this year and didn't have an hour or more to spend wrapping each of them. But that's only half of it - then you have to check them by unwrapping each tomato and then re-wrapping the ones that aren't ripe yet. Over and over again.

Now, all you wrappers out there - I love you. One day I may be you. But my simpler method works for me now - it ripens tomatoes that may go to waste on my vines but are perfect for fresh eating or making into Roasted Tomato Sauce to freeze (I don't can with late season tomatoes since they are typically from late-blighted vines in my garden).

And since I'm sure there are a few more out there like me (right?...right?), I'm sharing my fairly quick and definitely easy method. Below you'll find the tips I use to FIND the tomatoes that will ripen (and those that won't - yes there are some) and then the other two steps I take to ripen tomatoes. 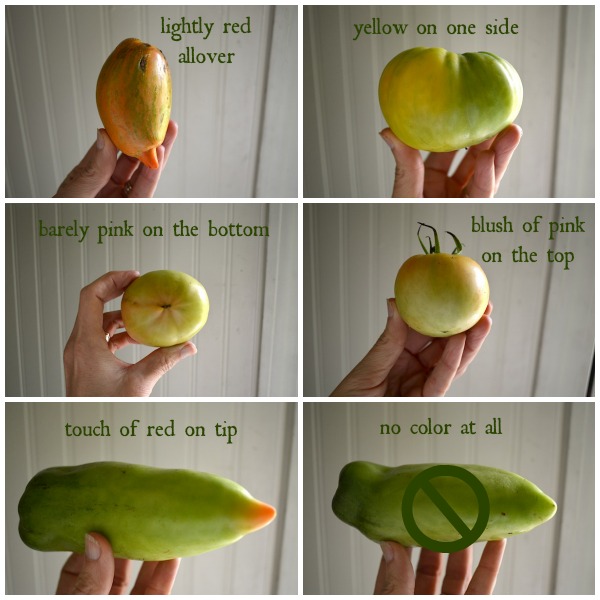 Step 1: Harvest all the tomatoes with "potential." Of course you will grab those that are already lightly red - that's a no-brainer. They will even continue to ripen on the window sill or in a bowl. But you'll also want to look for tomatoes with these signs of ripening potential:

The last photo is what you don't want to bother harvesting - a solidly green tomato with no hint of color anywhere and is hard as a rock will not ripen inside at all in my experience, so no need to waste your time with it. (But you don't need to toss solid green tomatoes - they make wonderful salsa verde in place of tomatillos, and of course, fried green tomatoes.) 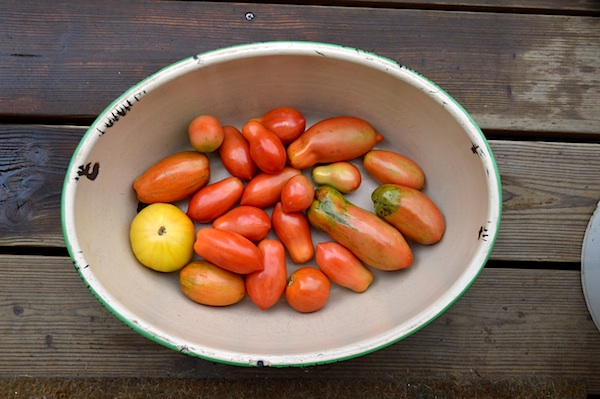 Step 2: Separate. You'll want to separate the tomatoes that are lightly red all over from the barely colored ones. 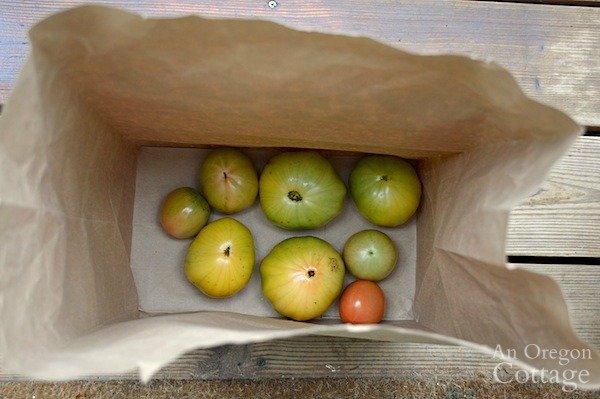 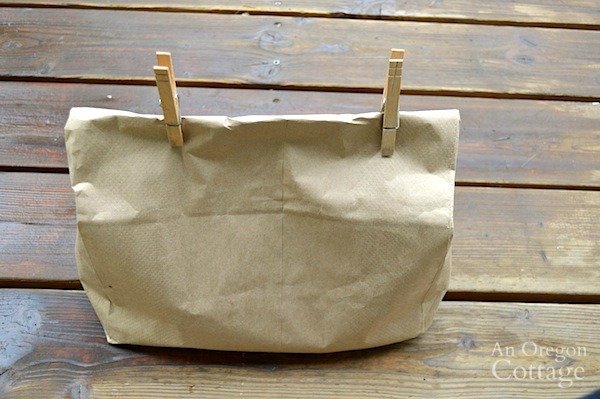 Step 3: Check your bags regularly. It's important that these bags of ripening tomatoes be in a place where you can easily check them every couple days, because there will always be one or two that will start to rot and if you can remove it quickly, it won't spread to the other tomatoes. Pull out the ripe tomatoes, reseal, and check again in a couple of days. 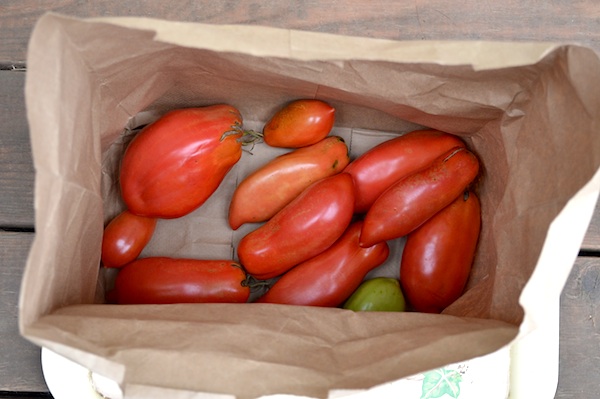 That's it - three easy steps and a few minutes (depending on the amount of tomatoes you have) and within a week or two you will open the bags to find fully ripened tomatoes!

There are often a few areas that need to be cut off, but this method to ripen tomatoes creates fruit that is terrific fresh in soft tacos, salads, and sandwiches, and of course a couple last batches of garden harvest roasted tomato sauce or plain roasted sauce to use in recipes all winter.

Wondering about that green tomato at the bottom of the bag pictured above? There's usually one or two of those - the tomatoes that refuse to ripen. Don't sweat it - just gather them to make salsa or fry them!

How long do these ripened tomatoes last?

When I ripen tomatoes this way, I've had some tomatoes still going in their bags all the way into mid December. But years when I have to harvest earlier it's usually through October. But that's still a pretty good run! 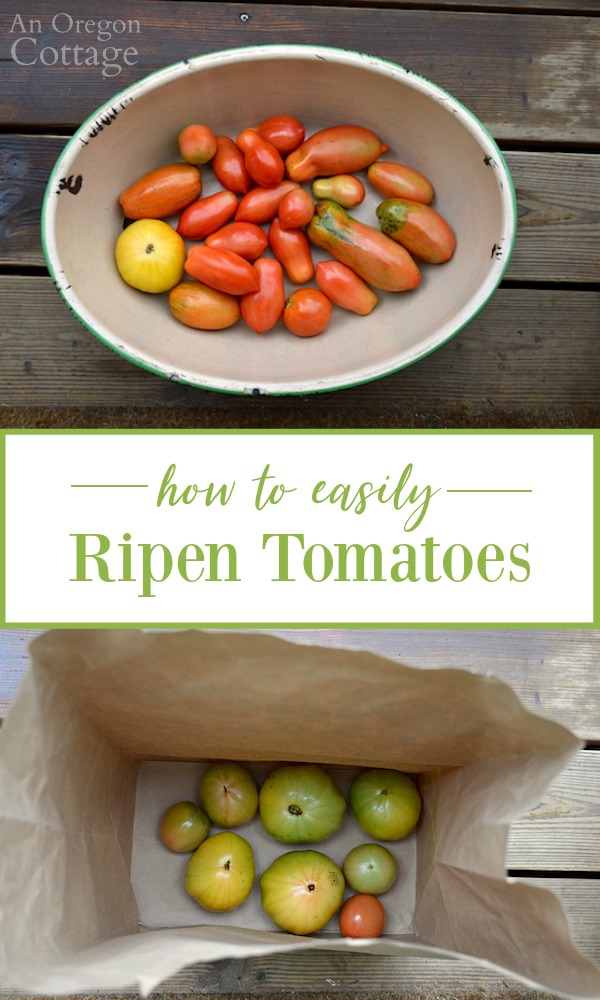 How do you ripen tomatoes at the end of the season?

This article has been updated - it was originally published October 2013.