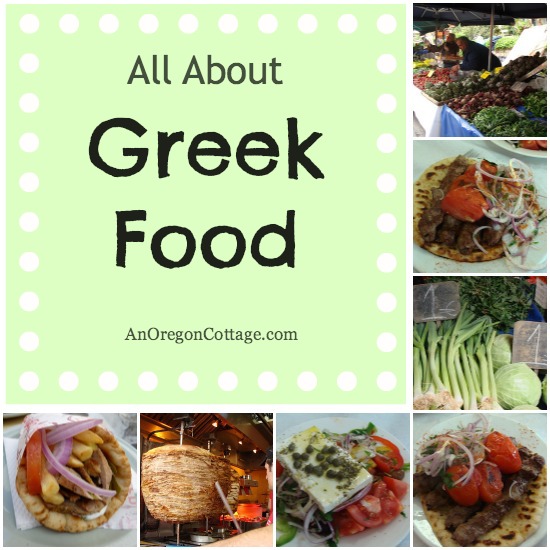 To say we enjoyed the food on our recent trip to Greece is probably a bit of an understatement. And our wonderful hosts really went out of their way to make sure we tried many of the dishes Greece is known for like gyros (pronounced YEE-ros), kabobs, pita (which is a pocketless flatbread in Greece), tzatziki, and of course, Greek salad.

I knew I’d get some awesome flavors and that there would be meat and pita involved – and lots of cucumbers (which I really don’t like…sigh), but here are a few of the surprising things I learned about food in Greece: 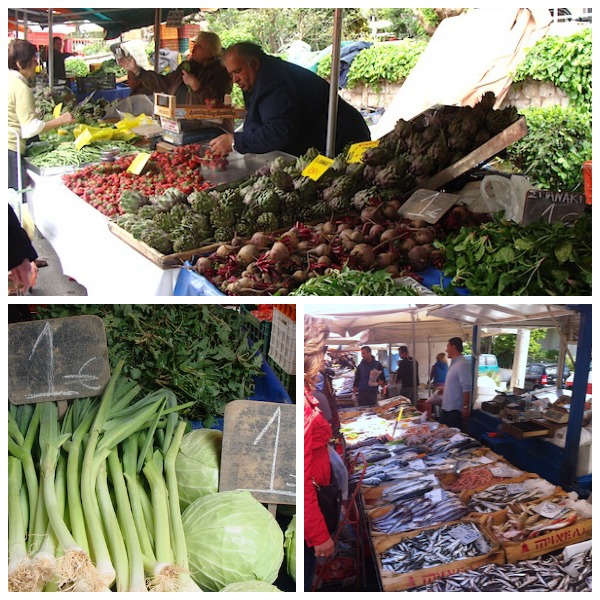 And the open-air, neighborhood markets called laiki (pronounced ly-KEE) were nothing like our sedate farmer’s markets. They are loud and noisy, with every vendor trying to entice you to buy their product. Little old Greek ladies barrel through the crowd with their wheeled baskets in tow – caring little when they inevitably bump into you – none too gently, I might add.

Oh, but what a feast for the senses! The laiki we went to was huge, encompassing so many streets we didn’t even get to them all. It moves from neighborhood to neighborhood throughout the week and locals know the day it will be in their area and plan accordingly. It also includes sections of dry goods – everything from kitchen gadgets to clothes to decorator pillows. I bought a leather purse there for only 20 euros (about $26), which isn’t dirt cheap, but a good price for a nice quality purse. 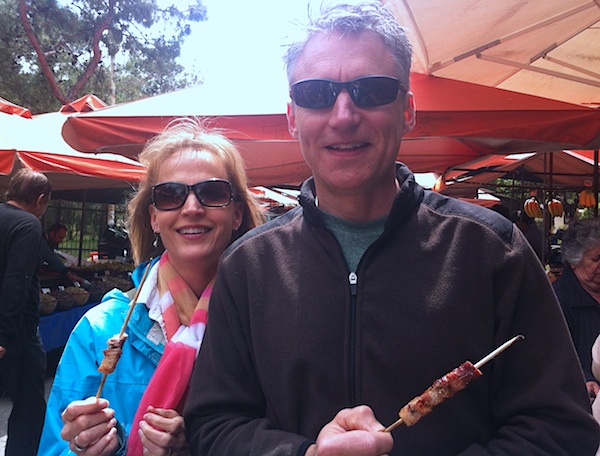 There actually weren’t too many vendors selling prepared foods from carts, but we did manage to find one (a-hem…). These cubes of pork on skewers (kalamaki) came in a bag with a piece of bread for 1 euro ($1.30 exchange while we were there). Very tasty! But here opens the confusion of the Greek terms for these foods – we heard souvlaki, kabobs, kalamaki, gyros…and all seemed to be describing grilled meat.

Here’s the answer from our host that helped us understand the different names:

Kabob is the pressed meat, gyros are the shaved meat from the rotisserie,  kalamaki is the cubed meat on a skewer.  Souvlaki is just a general term for anything grilled on a skewer- either on a small skewer that you would do over your grill or on the large rotisserie.  We’ll often say, “should we do souvlaki for dinner?”  – meaning we may order kabob, gyros, or kalamaki…. 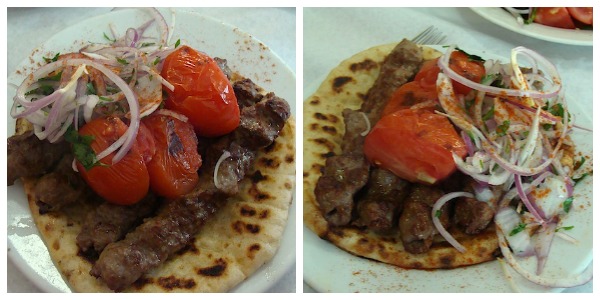 Here’s a kabob dish we had at one of Athens famous (and crowded) tavernas, Thanassis. It was a combo of seasoned ground beef and lamb pressed around a skewer before grilling. (When you sit down at a taverna, kabobs and gyros are served open-faced and when you buy take-out they wrap the pita around the filling and present it to you in a paper wrapper.)

Most of the time the tomatoes were fresh – this was the only time we had them grilled – it was really yummy and the meat was excellent. 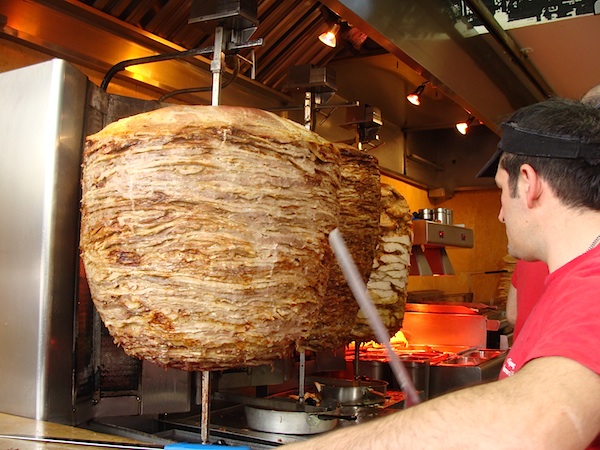 And here are the amazing cone-shaped rotisseries from street gyros stands. It really is something to see – there are all these layers of seasoned meat (pork in front and chicken to the back of this photo) that cook as the spit turns. When it’s time to make the gyros, the worker uses a long serrated knife (just a blur in the photo) to slice off the meat into a container he’s holding as the meat turns. It’s all assembled while you watch. 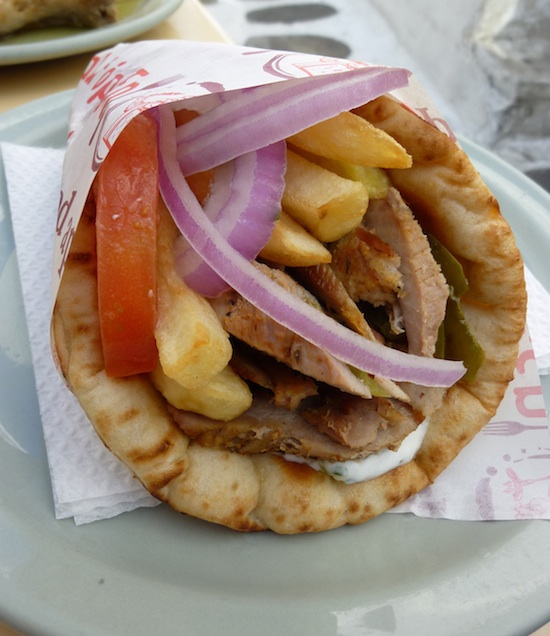 Into this delectable hand-held meal. (I actually forgot to shoot a picture of one of our many gyros meals – here’s the source for this photo). All our gyros were made this same way, whether we were in Corinth, Athens, or Thessaloniki – pita, rotisserie meat, fries, tomatoes and onion. Except, NO tzatziki like this picture shows – it was always separate and we had to pay extra for it. Maybe it’s because of the economy now, but it wasn’t included in any gyros during our visit.

Personally, I just don’t get the fries in it – I mean, it’s a huge piece of bread for heaven’s sake. I just gave mine to Brian, plus half of the pita – it was just too much bread for me. But I loved the meat – and it was good all together. 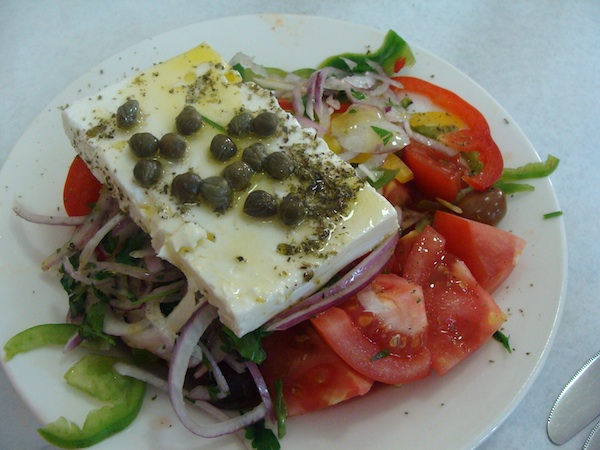 And finally, the ubiquitous Greek salad. Can I just say I was in heaven? So fresh with bright red tomatoes and chunks of feta. This particular salad pictured was from the Thanassis taverna, and was the only time capers were included in the salads we ordered. Sometimes they came with sliced sweet peppers and most of the time they were on a very small bed of shaved lettuce or cabbage (so small that you didn’t see it until serving it up).

But all of the time they were composed salads, not tossed – vegetables layered and then topped with a few olives and a chunk of feta. The feta could be in one piece as pictured, but more often was in 3-4 pieces, but never crumbled – never. This layering worked very well for me, since I could choose my portion from the vegetables that hadn’t been contaminated with icky cucumber juice!

The salad was drizzled with a simple olive oil and vinegar (or lemon) dressing and sprinkled with oregano – the signature Greek herb. This is how I’ll be making Greek salads from now on.

I know this is getting long, but are you wondering how I did eating all this food and maintaining my weight? This trip proves the point I made in my real, whole food weight-loss series – when you live a lifestyle of eating smaller, moderate portions of non-processed, whole foods your body naturally stays at it’s optimum weight – after two and a half weeks of eating out, in friends homes, and trying a lot of new things I came back at the exact weight I’ve been at for the last two years.

And I never denied myself. But I did only eat half of most of what you see pictured. And taverna meals like we ate – sharing appetizer plates called mezedes – lends itself to just trying little bits of a number of dishes.

I’m working to refine some of the recipes I came back with and adapt others to replicate those we had in Greece – yeah, we have to eat more Greek food…sigh. But it’s all for a good cause – so I can share them with you!