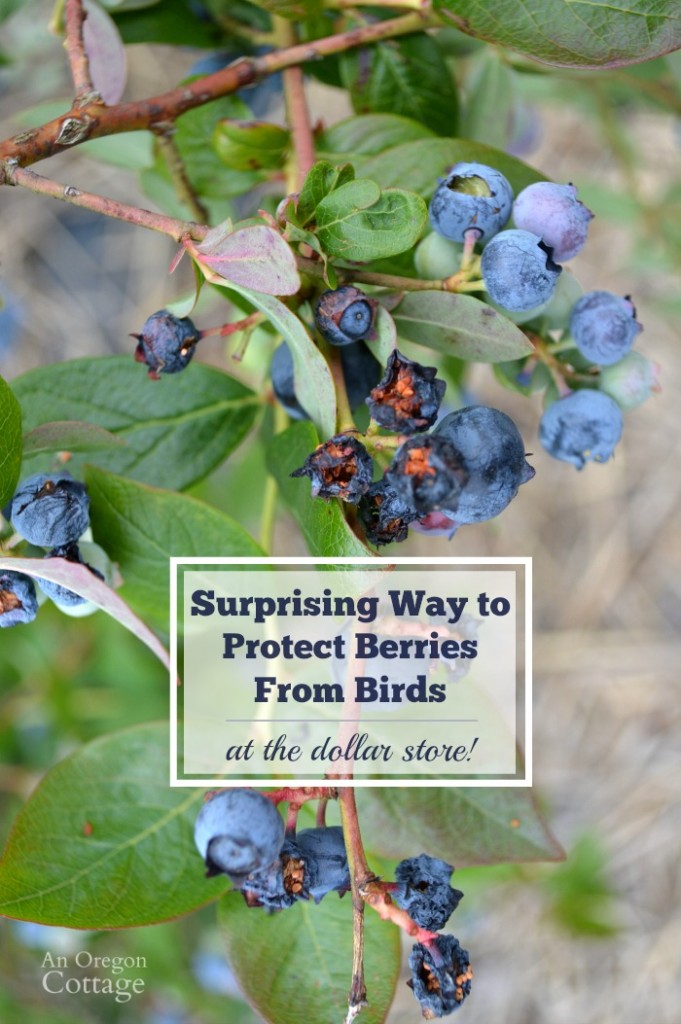 Keeping birds away from our garden fruit ranks right up there with keeping bugs from eating all our hard-earned vegetables. Last year I shared this organic insect garden spray that works really well on lots of things including basil, beans, cucumbers, and flowering plants like roses and trumpet vines. That has gone over really well with huge shares on social media and Hometalk and lots of people chiming in on the comments on how it worked for them.

So I thought I'd share a much smaller victory I've recently had at keeping birds from eating every last one of our berries. It's super easy, inexpensive, and doesn't require the netting that makes it hard to harvest and sometimes ensnares animals (readers have told me of not only birds being caught in the netting, but snakes and even a cat got tangled in one).

Our blueberries started ripening earlier than normal this year (along with everything else in our warmer-than-normal spring and summer) and by the time I noticed, the birds had already gotten most of the ripe berries, shown above. I took 10 minutes, ran in to the garden shed to get my bird scare weapons and set them up. 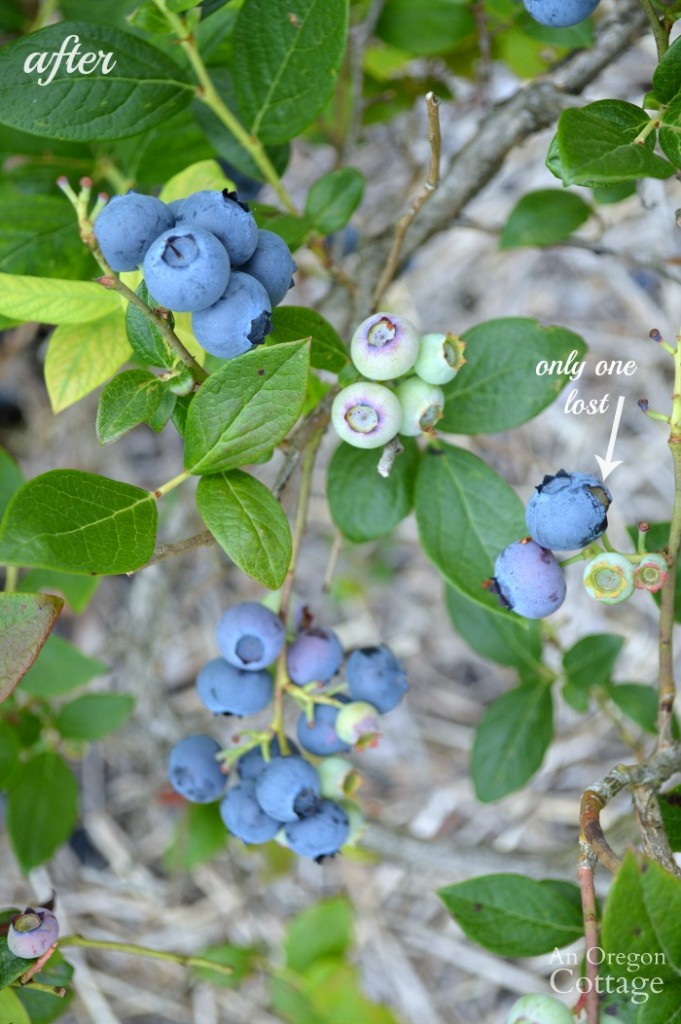 I waited about 3-4 days before checking and this is what our bushes looked like - bird-damaged berries only here-and-there with LOTS of untouched berries for us to pick! So, what were my weapons in the war to protect our berries?

Two things I picked up from the Dollar Store: toy snakes and shiny mylar pinwheels. Really! There's a couple reasons why they work and a couple things you need to do to keep them effective, but at least for me, they really help to keep the bird damage to a minimum with the least amount of cost and effort on my part. 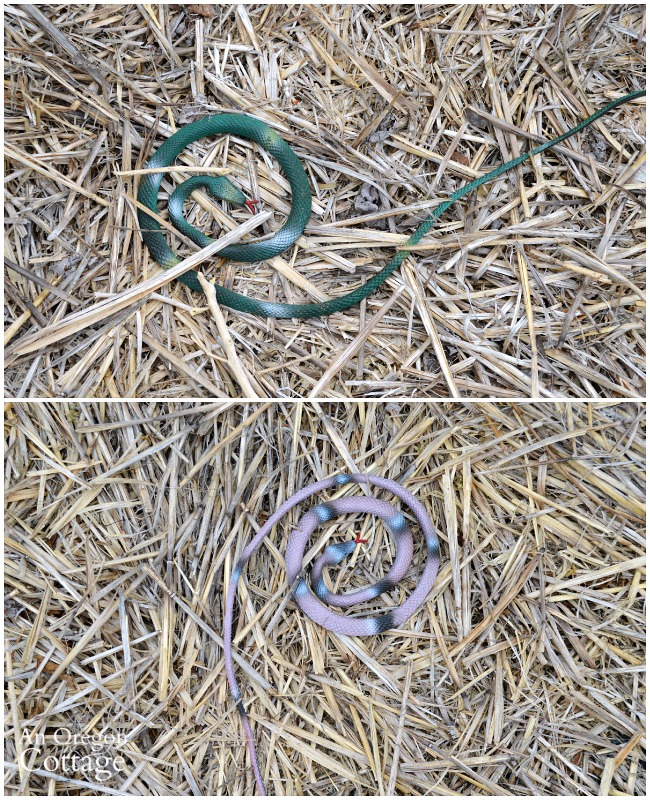 I've used toy snakes for about 3 years now in the berries all by themselves and they work pretty well in the beginning, but the birds probably get used to them even with moving them around. It's definitely worth it, I think, because it's so easy. You do have to warn people who come to pick, though - I've had some fun reactions to them!

However, when I added the pinwheels last year, these two in tandem worked better than I had hoped and my experience was the same this year, which meant it worked well enough that I could share it with you! 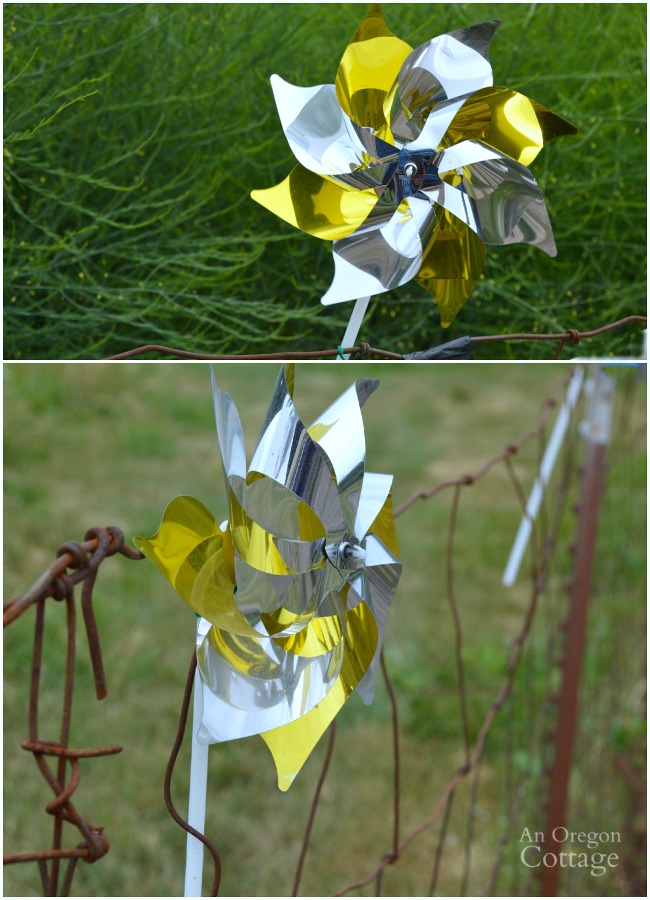 So you can guess that like the snakes, using them only when the berries are ripening is key. Even though they're pretty don't leave them out for longer, as birds are pretty smart I've found. Keep them surprised and don't let this season's babies get used to them! 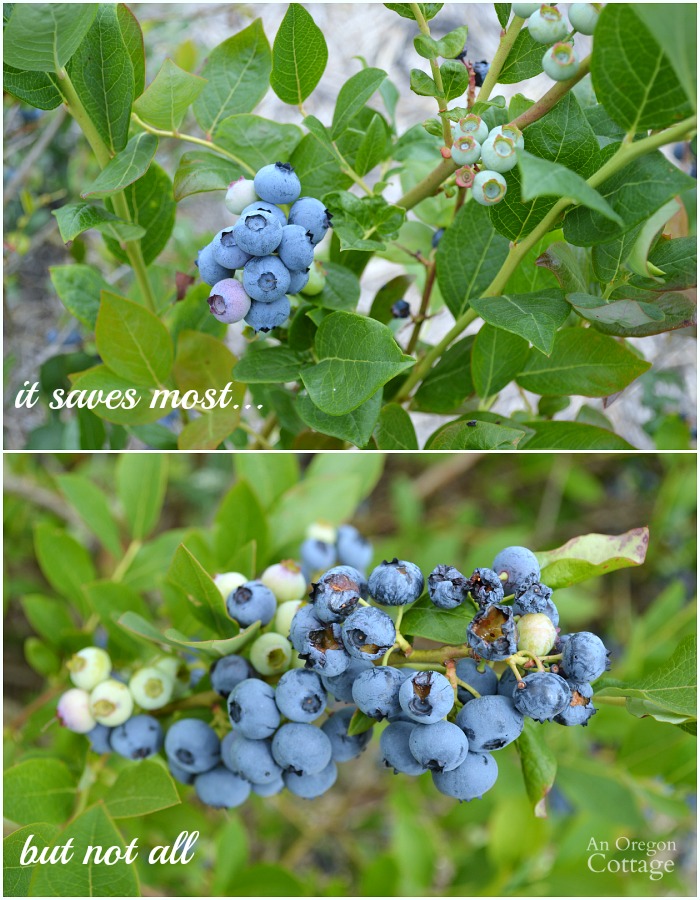 SO easy, right? And, I have to admit, kind of fun! However, I'm not going to lie and say that it will keep birds away from your berries completely, as you can see from the pictures above. To me, it looks like a bird started eating away and then was scared off by one of the pinwheels starting to spin.

There are plenty of berries left for us, since we have quite a few bushes that produce for us (nine that ripen at different times over about 1-1/2 months)- in fact, I had to ask my sister to come and pick to help us keep up with them all!

If you want to keep birds away totally, pretty much your only option is to build a structure and cover it with netting or screen. That's just too labor intensive and expensive for our nine bushes that produce for just over a month. But grabbing some snakes and pinwheels for a couple dollars and taking a couple minutes to put them up (and then put away)? That's right up our alley!

How do you keep birds from your berries? Have you tried either of these things? Share your successes (or failures) in the comments with us!