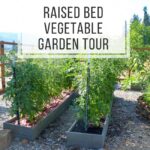 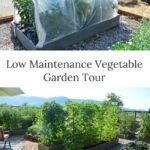 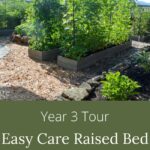 Take a summer tour of our low maintenance raised bed vegetable garden in year 3 - the year everything finally came all together. Find inspiration and tips on growing, layout, and starting a fall garden.

I'm pretty excited to show you our vegetable garden at the height of its summer glory, not only because it brings me joy (and food, ha!) and taking virtual 'tours' of others gardens is fun, but because it's finally DONE.

Yep, the third summer is when we were able to finish building all the raised beds, the deer fencing, the automatic watering system, and the gates and gate arbor.

Wait, three years? Isn't a garden supposed to be easy - dig up some dirt, add seeds and plants and water?

In theory, yes. But in reality that will reap you a patch of weeds that you (and your plants) struggle with all summer.

I've been that person who has seen this and thought I'd never want to garden because of it. And I've talked with many, many more who say something like, "Yeah, I tried gardening once and gave up when it got hot, dry and the weeds took over."

The answer, my friends, as laid out in my eBook, Vegetable Gardening The Easy Way, is raised beds, permanent paths, mulch, and watering at the roots.

It takes a bit more time to set it up initially - depending on the layout and materials you decide on - but it is WORTH IT.

Let me show you how it's working for our three year old farmhouse garden (you can also see this in practice in our last garden, just on a larger scale and with gravel paths which I wouldn't do again in a veggie garden - too much dirt coming in and out settled in the gravel and created a bed for weeds...).

Grab a cup of coffee or tea and come along for a tour, either through the video or photos below - or both!

The tomato beds are the first thing you see when you walk into the garden. This garden design is a first for me - long 2x12 beds growing single rows of tomatoes.

In the past I've grown them two across and 4-6 down in 4x10 beds. I have to say that harvesting is a lot easier when you can access both sides of the plants when grown like this. This is something I'd recommend to any raised bed gardeners!

You can see above that I've pruned the bottoms of the plants. I was pretty aggressive with that in early July as the bottom leaves were already starting to show signs of blight (a problem we have here in the PNW regularly, and especially after the cool and wet June we had experienced).

After pruning, I've had to remove a few more leaves, but the plants are healthy and not showing more signs of blight.

I always prune the bottom of tomatoes, though, once they reach about 3 feet, removing leaves and suckers up about 10 inches to discourage blight, to create more air flow, and encourage upper growth.

Other than that, I only prune here and there to keep the plants in control. Towards the end of September as the season winds down, I will prune any new growth to encourage the plants energy to ripening any fruit on the plant.

Next to the tomatoes is the round rock wall bed. I created this using rocks from our property after excavating for the farmhouse's foundation. I just piled them on each other in a secure way and it's holding up well!

This is a six-foot round bed, making the center not really accessible for harvesting food. So I grow flowers in the center - a clematis grows up the center trellis and flowers in the spring, then sunflowers I seed take over for the summer.

The outside of the bed is reserved each year for basil and zucchini and then any overflow I have. This year it is an extra Cherokee Purple tomato I grew from seed and a tomatillo that reseeded on it's own from last year's plant.

I also throw in a few flowers, always marigolds and this year I experimented with growing Salpiglossis (or painted tongue). They are beautiful flowers, but I've found they don't make good cut flowers since they last only a day or two.

We built four of the long beds so I could alternate growing tomatoes and beans in them each year (you can see the garden layout here). The beds to the right of the rock bed holds the pole beans this year - my two favorites I grow every year:

Both are filet type beans, so are stringless and tender at both the small and larger stages, which is good when they're coming on and you can barely keep up with picking!

At the end of one of the 12-foot long bean beds I've planted a section of cucumbers for pickling.

They are growing up the cattle/hog panel just as easily as they did up the wooden and metal trellises I showed in this article about the 5 reasons to grow cucumbers vertically.

A reader had told me they didn't grow up the panels as well, but I haven't had a problems with winding them up.

We had a slow start to the season, but they are producing now and I've been able to can 5 quarts of pickles from this short row and have had plenty for Brian to eat fresh (I don't like fresh cucumbers - only as small pickles, lol).

As you walk around the bean beds you come to the main garden path with beds on both sides - the previous beds I showed are on the left in the photo above and the six 4x8 beds on the right.

You can also see our view - yes, it makes being out in the garden that much more sweet.

The other things to notice are two more things that make this garden low maintenance:

The reason the wood chip paths are lower maintenance than the gravel we had in our previous garden boils down to...weeds.

When weeds start to come in these paths, I simply have to lay down more cardboard and chips and call it a day. If dirt spills from planting or laying mulch it's not a big deal.

Unlike the gravel paths. Any dirt that spilled created a bed that weeds LOVED. Then the moles came up through the gravel and the weeds took over. There's no layering with gravel either. It was a maintenance mess. #liveandlearn

I ordered the red raspberries through the mail and discovered this year that they were mislabeled. I ordered 'Canby' which is a thornless summer bearing berry.

But I have thorny canes that have been bearing small handfuls since June and now is full of larger amounts with more small berries coming on. This is typical of everbearing varieties.

Oh well, they're still delicious and I've been enjoying them almost daily since June on my granola!

This bed kept us in salads from May through July when the heat finally caused it to bolt. I also harvested two rows of carrots and one row of beets.

The lone chard in the front was the only one out of four that grew from what I started from seed in the spring.

In the video tour you can find on this page, you'll see that shortly after this photo was taken in late July, I pulled the lettuce, added fertilizer and replanted with transplanted lettuce that I started a month ago outside, but in the shade. Hopefully that will see us through the fall!

This is another bed that looks different in the video tour - I'd already cut down the volunteer sunflowers and dead spring pea vines and replanted with fall peas and Chinese cabbage I started along with the lettuce in trays in July, keeping them watered and in the shade as much as possible.

The vines along the edges are 'Baby Boo' pumpkins that volunteered from last year. I grow them for decoration and let them grow along the paths.

Shortly after the above photo was taken, I harvested the small cabbage heads that were growing on the cut stalks (Did you know that if you leave the stalk after cutting the main head, small baby cabbages will grow? You can harvest them, cut them in half and roast them or use them for salads!).

Then after refreshing the soil with bagged manure, I replanted the area with new cabbages for the fall I had started from seed.

The other plants are broccoli that has been producing side shoots for me since the spring (this is a variety that is a cross between a traditional broccoli and a broccoli raab, so the shoots are thinner).

I can usually get by with one planting of broccoli if I plant a variety that produces a lot of side shoots. They just keep going all season long!

Right after taking this photo the evenings and days were warm enough that I removed the row cover from the pepper hoop house. When the nighttime temps start to fall into the 40s again, I'll replace it to encourage the peppers I have to ripen and hold until frost.

The bed also holds small sweet peppers so that they'll ripen fully to a color (they're orange) and a couple of large bell peppers that I won't pick until they fully ripen to sweet red peppers.

Well, that's it for the summer garden tour for year three! I hope you can see how easy this is to maintain (Weeds? Ha! I literally have picked a few here and there...) and yet how much we are harvesting from it.

You can see one of the beds above I didn't mention - it's a long broken concrete boarder bed for the flowers I can't grow outside of the fence because of the deer. Mainly hydrangeas, which I love, but also a few other cut flowers in the future.

The video tour shows a bit more, including what I've planted outside the fence as you walk in and more of the broken concrete patio visible to the left above.

Which is where you'll find me most Sunday afternoons with a good book enjoying the weather, the garden abundance and the view!

How does your garden grow?