Making classic turkey noodle soup from turkey bones and meat has become one of my favorite parts of cooking a turkey - it's so delicious! Not to mention it's full of bone-broth goodness and uses up all parts of the bird (and even scrap vegetables).

Once you try this, I think it will become a part of your turkey tradition, too. And if you're not eating noodles, this is great without them or with zoodles or other vegetables. 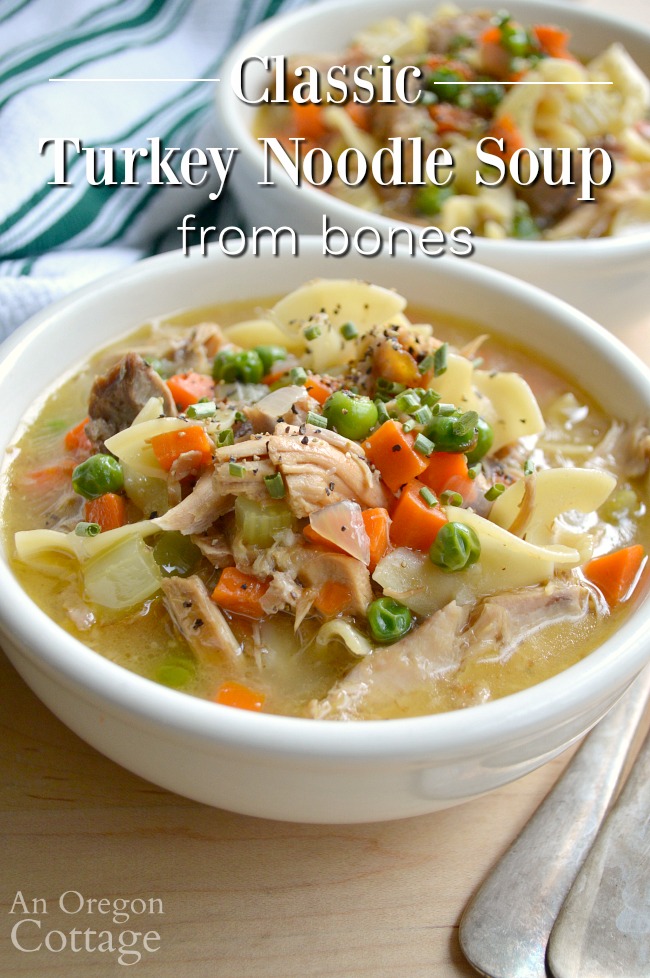 Do you make turkey noodle soup from the leftover bones after roasting a turkey? I find I'm in the minority when it comes to making a soup after roasting our holiday turkey, at least in my extended family.

But I love it - everything from using up the bones, to smelling the broth simmer, to eating a yummy bowl full of bone broth and healthy vegetables.

I even buy an extra turkey during the sale season to roast later in the winter, not only to have cooked meat for the freezer (to use in recipes like this, substituting for the chicken), but also to be able to make this classic soup. It's pure comfort in a bowl.

I didn't grow up watching anyone make soup with roasted turkey bones - we mostly just threw the carcass away. But when I reached a certain age (as in, paying for my own food!), it seemed like such a waste. I mean, I could see there was still some meat on those bones!

So through trial and some error (this is what you did before the internet, lol) I learned how to make a warming, flavorful bowl of turkey noodle soup.

If you grew up like I did and haven't a clue as to what to do with poultry bones, here's a short tutorial along with the full soup recipe. It's basically three easy steps with little hands-on time.

Once you try this, I'm pretty sure you'll be asking for the family's turkey bones at the next holiday, just like I do.

Update: Oh, and if you're not into eating noodles, you can leave them out or add zoodles when serving (the heat from the soup will soften them perfectly). See the variations in the recipe card.

How to Make Turkey Noodle Soup From Bones 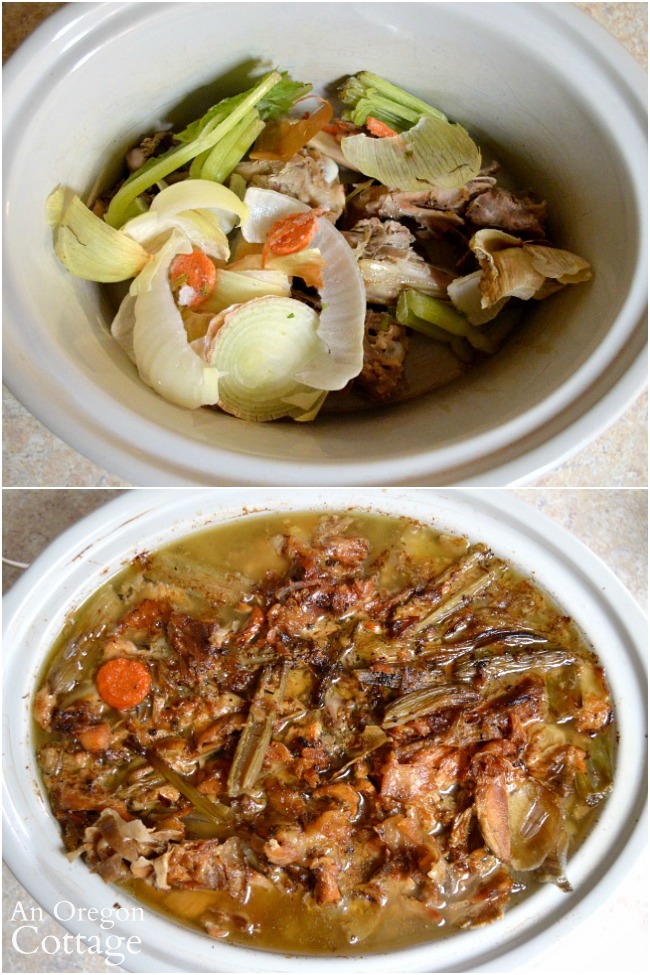 The first step is to break the carcass into smaller pieces to be able to fit your largest pot (a 10 to 12-quart stock pot) or a 6 quart or larger slow cooker. I now prefer the ease of making bone broth in a crockpot like I show here, but either way works!

Add any liquid from the roasting pan (or leftover gravy that you have) as well. Add water to completely cover the bones as much as possible and throw in some onion, carrot, and celery trimmings (or a whole carrot, half an onion and a celery stalk, all cut smaller).

Stovetop Cooking: Bring the contents of the pot to a boil, turn down the heat to low and let it gently simmer for 1-2 hours (or more) until the meat is falling off the bones and the broth is golden.

Slow Cooker: Set on low and let cook as long as possible, 8-10 hours or more. The easiest is to add all your ingredients in the evening and then let it cook all night and into the next morning when you're ready to deal with it.

I didn't believe when I first tried to make turkey soup (or any stock from bones for that matter) that the vegetables would make a difference, and since I'm frugal I would only add water. I just couldn't put perfectly good vegetables in there to just throw away with the bones.

But the finished soup was just sort of blah. I mean, we ate it, but it didn't seem terribly flavorful.

Then I read (probably in the Tightwad Gazette) that I could keep the ends and trimmings of vegetables in a baggie in the freezer to use for making homemade broth.

Well, you can imagine how I felt about this- yay! Using not only what you have, but what you were going to throw away? I'm all for that.

And what a revelation it was for the broth, too! Both Brian and I noticed right away the difference in the soup made with the broth cooked with vegetables. The flavor is deeper, more pronounced, and it's well...it's just better.

Plus I've learned there are studies to show that many of the good vitamins and nutrients in bone broth come from the added vegetables, so one more reason to always add them! 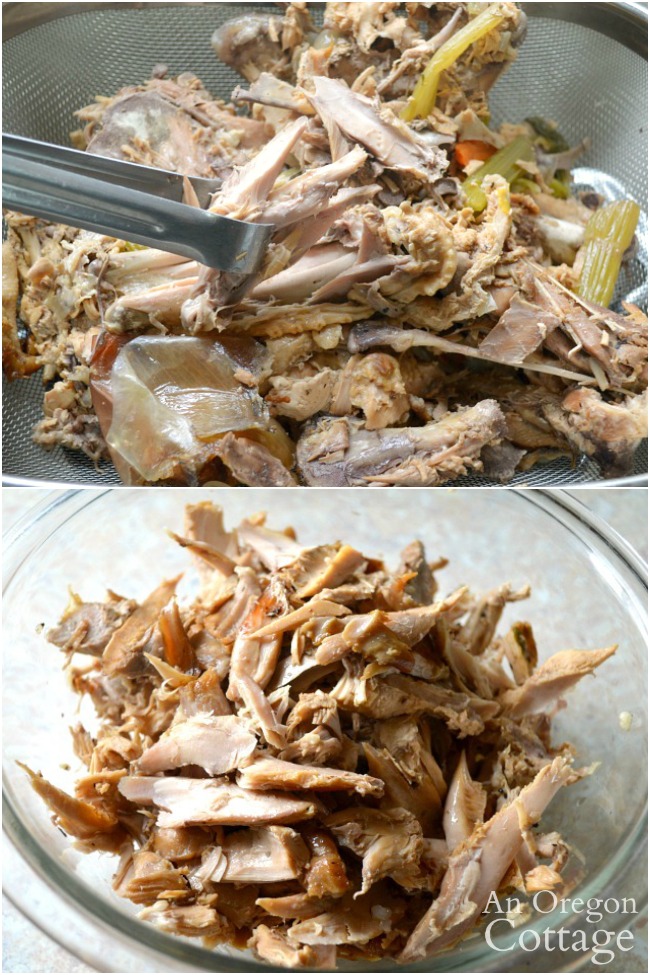 2. Strain the Broth and Collect The Meat

Let the broth cool a bit, and then set a large strainer in the sink over a large pot or bowl to separate the broth from the bones and meat.

I use this type of strainer that rests on the sides of a sink which is big enough to hold all the bones and strain it right into a 6-quart or larger soup pot. TIP: always remember to put a pot under the strainer to catch all that wonderful broth (ask me how I know this...).

Separate the bones from the meat, discarding the bones and keeping the meat in a separate bowl as you work. It is hot, even after cooling a bit, so I often use the small tongs that you see pictured above.

Ugh, what if I don't want to take the time to remove all the meat?

Here's what I'll say if you fall into that camp:

But you'll have to be okay seeing perfectly good meat go into the trash.

Congratulations, you now have wonderful, nourishing bone broth! Now you have two choices:

If I'm cooking on the stovetop, I often like to get the bones cooked right away, then refrigerate the broth to make the soup the next day. With a slow cooker broth, it cooks all night, so I usually don't bother refrigerating.

TIP: For those who've never made broth from bones, know that it will be jello-like when cold. That's because of the natural gelatin found in the marrow of the bones and is one of the reasons homemade stock is good to eat. It will liquify again as it reheats.

What if I have more broth than I need for the soup?

If your soup pot is close to the top with broth, that is too much - you need to have room to add your ingredients. A pot halfway full is best, about 10 cups of broth.

Pour any extra broth into freezer-safe containers, label and freeze for anytime you want a lovely soup. 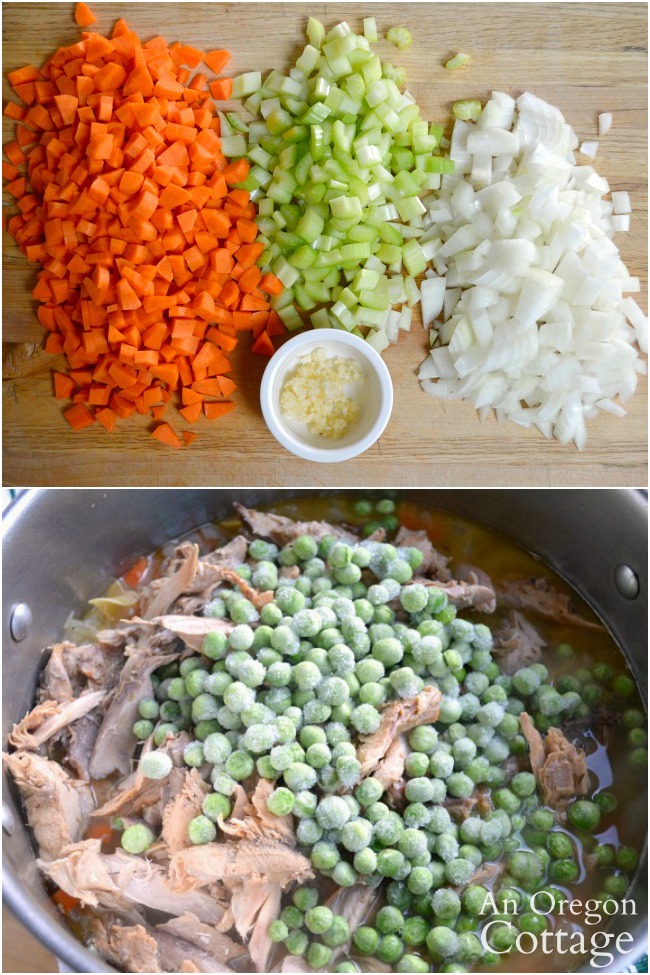 Now that you've got your broth, it's just minutes to a wonderful bowl of soup - really!

Whether starting immediately or waiting a day, at this step you'll need to heat your broth in the pot you'll make the soup in, a 6 quart or larger pot. While it's heating, dice and add the vegetables for the soup. I always add couple cloves of minced garlic, but it's optional because it's not technically traditional.

Bring to a boil, lower heat, and cook at a simmer until the vegetables are soft, usually about 15 minutes.

It's after the main vegetables have cooked that you add noodles (if you are using) and frozen peas or other vegetables, so that you don't overcook them. Also, if this was a holiday turkey and you have leftover vegetables, mashed potatoes or gravy you want to add, now is the time. Adding the potatoes and gravy will give the finished soup a creamier texture.

BIG TIP: Definitely taste for salt! You will need to salt it more than other soups because we're starting with unsalted, homemade broth. 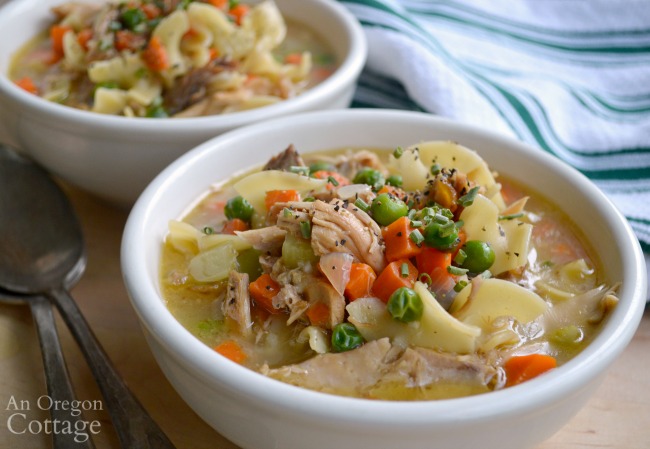 That's it - now reward yourself with an incredible bowl of classic homemade turkey noodle soup! Or turkey vegetable soup, or any other soup you'll make from all that broth.

And don't you feel so good for using up all the food, too? Bonus! 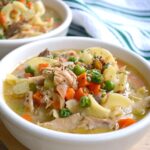 *You will probably have more broth than needed for the soup. You'll want a 6-quart soup pot half full (about 10 cups of broth). Add any extra broth to freezer safe containers and freeze for up to a year. Variations: 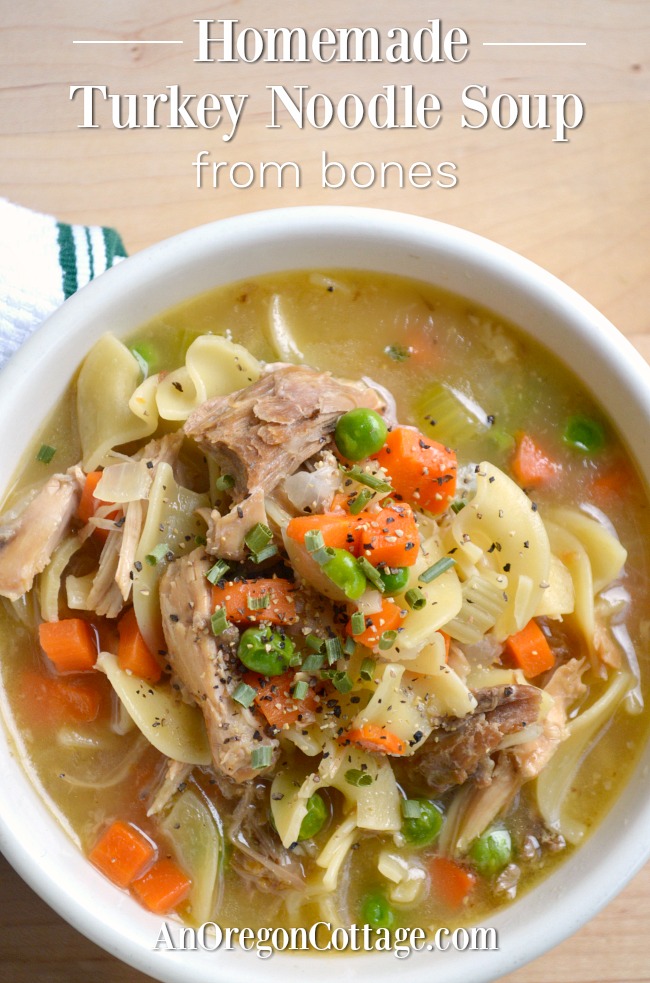 Other Easy, Healthy Soups to Try:

This recipe has been updated - it was originally published in December of 2009.

Subscribe to the popular newsletters AND get access to this Seasonal Menu Ebook with 20 weeks of dinner menu ideas in the VIP Subscriber Library - with more notebooks, checklists & recipes. We'll never send spam - read our Privacy Policy here.

Welcome - I'm so glad you've joined the AOC community! Your first step is to check your email to confirm your subscription and you'll be on your way to your free eBook and more printables.