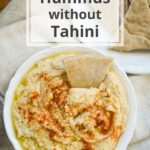 No tahini? No problem! You can make a quick homemade hummus without tahini if you've got sesame seeds. It results in a fantastic and much more convenient dip - plus, it's simpler and less expensive.

When I first met Brian's family back in the 1980s, I had a tiny bit of culture shock since they had traveled and lived in different parts of the world, including Turkey and the Middle East.

So Brian's mom regularly made Middle Eastern dishes like lamb shish kabobs, baba ganoush (an eggplant dip), jajik (the yogurt/cucumber dish which has different names & variations depending on the country, similar to Greek tzatziki) and hummus (garbanzo bean dip) served with pita bread.

No one I knew ate these foods, let alone made them from scratch.

At that point in my life I was more picky about food, but trying to make a good impression on my new family, I ate them.

I found I loved the shish kabobs, and baba ganoush is still the best way to eat eggplant in my book, although jajik I stay away from (as I do with anything that contains fresh cucumbers...).

But I fell in love with hummus and I actually learned to make it since it was so good and it was one of Brian's favorites.

I was not surprised that by the 1990s hummus became wildly popular and suddenly you could find it in delis and groceries and get the recipe in newspapers.

It's super easy to make, is perfect with vegetables as well as chips and pita and makes a nice protein rich dip alternative to the normal creamy-cheese type dips.

The only bummer with making hummus, though, is that besides garbanzo beans, the other main ingredient is tahini.

It's a relatively expensive item that is not something I normally buy so it was usually feast or famine with homemade hummus - we'd have a lot and then none for months.

Plus, it was plain irritating to usually be out of tahini when I wanted to make hummus.

What is tahini made of?

This went on for years, really, before I realized that tahini is just a spread like peanut butter. If you look on the container, the ingredients are sesame seeds and salt.

And that means sesame seeds could be ground just like nuts to make a butter.

Sesame seeds are less expensive and something I usually keep in the pantry to use to coat granola bites, top stir fries and more.

Guess what I discovered? It's easy to grind the seeds as a first step to making hummus - there's no extra dishes and only about an extra minute of time!

Unless you have a super powerful food processor, the texture of this homemade hummus may not be as smooth as hummus from the store (though I actually prefer it a bit less smooth...) but the flavor is amazing.

This is the only way I make hummus now - without tahini and with sesame seeds!

This is why learning to make hummus can be a "back pocket" recipe you can pull out for snacks, entertaining, and road trips - it consists of:

Then you literally add everything to a food processor and whir until it's smooth.

The only thing that's different for this hummus without tahini from the regular recipe is that you begin with a step of making a sesame paste (tahini) by processing sesame seeds with a little olive oil.

After a chunky-smooth paste forms, add the rest of the ingredients and process until as smooth as you can get it, scraping the sides as needed.

And voilà - homemade hummus without having to buy tahini!

To serve the hummus, drizzle with more olive oil and sprinkle with a bit of paprika.

Serve with vegetables and pita or flat bread.

Do you know pita bread is even easy to make, too? Here's a simple whole wheat pita recipe to try.

The ultimate test to this tahini-less hummus, though, came when I (hesitantly) served it to my in-laws, practically tripping over my words to prepare my mother-in-law for the fact that it wasn't "real" hummus made with tahini.

Her verdict? "I think this is the best hummus I've ever had."

How long does homemade hummus last?

About a week in the fridge in an airtight container.

Yes! I freeze hummus all the time in airtight 1-cup containers. Thaw overnight before using and use up within a week after thawing. (This also works for store bought hummus.)

Is it cheaper to make hummus or buy hummus?

While a tub of store bought hummus isn't terribly expensive ($3-5.00), homemade hummus will cost you only about half of that, depending on where you live and the type of products you buy. An example: 1 can of garbanzo beans = .79; 1/2 cup (4oz) sesame seeds at .25 per ounce = $1 + the olive oil, garlic, and lemon juice adding about another .25 together bringing the cost of homemade hummus to just over $2.00.
Starting with dried garbanzo beans would make it even cheaper - closer to $1 for a full recipe. (Remember, it's easy to do when you've cooked dried beans in advance and frozen them for recipes like this!)

According to Healthline, hummus can help fight inflammation, improve blood sugar and digestive health, lower heart disease risk, and aid in weight loss. However, if you're sensitive to legumes, you want to monitor the amount you eat - too much may cause GI inflammation.

Is there more calcium in the 1/2 cup of sesame seeds vs. 1/4 cup of tahini in typical recipes?

Yes, according to this site, 1 oz. of sesame seeds contains more than double the amount of calcium than the same amount of tahini. Just one more bonus! 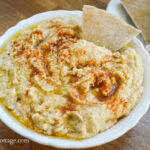 NOTE: If you DO have tahini, simply use 1/4 cup of it in place of the sesame seeds and olive oil. Whir all together until smooth. To Freeze: place into 1-cup portions into freezer containers, drizzle with a bit of olive oil, seal, label & freeze. Keeps for a couple of months perfectly. Variations: 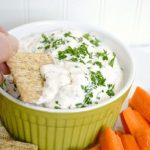 Creamy Feta Dip & Dressing
Make your own feta dip and dressing, controlling the ingredients and flavor while saving money over store-bought.
Click For Recipe 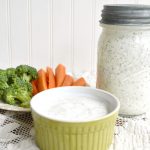 Best Homemade Ranch Dressing & Dip
A homemade Ranch dressing that strikes the perfect balance of flavors to pass the test of every ranch-dressing lover.
Click For Recipe 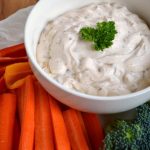 Easy Homemade Onion Dip - Better than a Mix!
A 5-ingredient, easy, real food onion dip recipe that will make you wonder why you ever bought the packaged mix!
Click For Recipe

This recipe has been updated - it was originally published in 2010 and updated in 2015.